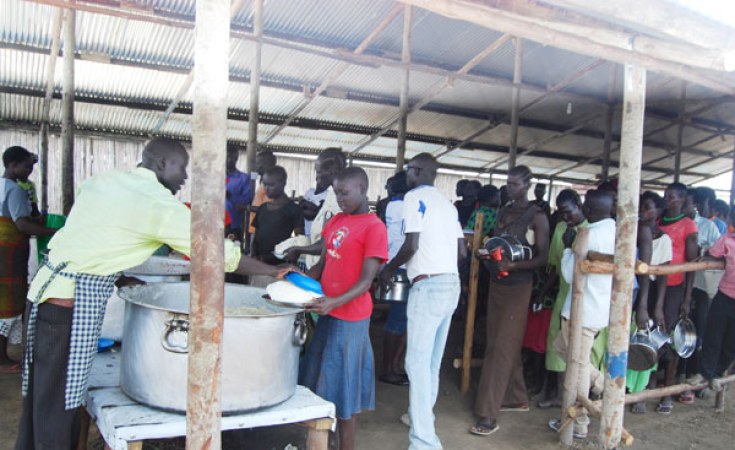 Cissy Makumbi/Daily Monitor
Lunch time. South Sudanese refugees line up for a meal of posho and beans at Palabek Refugee Settlement Centre in Lamwo District on April 3, 2017 .
The Monitor (Kampala)
By Cissy Makumbi

The Office of the Prime Minister (OPM) and the United Nations High Commissioner for Refugees (UNHCR) have relocated a total of 650 refugees to Palabek settlement in Lamwo District, Daily Monitor has learnt.

This follows the ethnic clashes between the Nuer and Kuku tribes of South Sudan in Palorinya settlement centre that left three people dead and six injured.

In July, there were clashes between the two tribes who accused each other of food theft from the farmland.

The Palorinya refugee settlement camp commandant, Mr David Wangwe, said they exhausted all the avenues to reconcile the two groups but the efforts have not yielded any positive result.

"Religious leaders, cultural leaders, refugee leaders and security were engaged in several dialogues with the two tribes but they all fell on deaf ears," Mr Wangwe said on Friday.

He added: "The two tribes vowed never to keep together and we were left with no choice but to relocate them."

Mr Wangwe said during the dialogue, the Nuer accused the Kuku of mistreatment and the Kuku's accused the Nuer's of being ruthless and believe in use of violence.

The relocation started at the beginning of this month and the last batch was moved on Friday.

The Lamwo settlement camp commandant, Mr Julius Kamuza, said they are aware of how the situation was in Palorinya and before the refugees were relocated, they were counselled to behave well.

"The leadership at Lamwo settlements were engaged before the relocation and those who were relocated, their leaders were also spoken to at length," he said.

He added: "Partners are already on the ground giving counselling and psychosocial support to them and the response is positive."

Lamwo refugee settlement has a population of 54,000 South Sudanese refugees who fled their country from March 2017 to date.