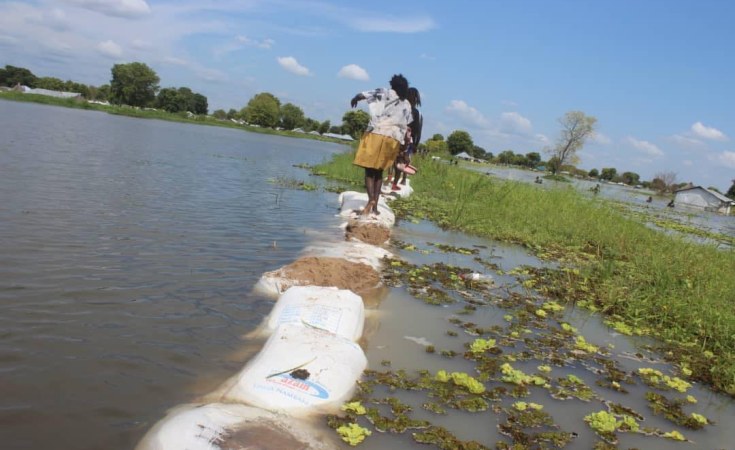 The government has so far done little, but there are several steps it can take to deal with the nexus of floods, droughts and conflict.

In recent months, South Sudan has experienced its most devastating floods in 60 years. As the country contends with a host of other emergencies - such as COVID-19, violence and economic decline - torrential rains have ravaged several parts of the country. Over 800,000 people have been displaced, with at least 400,000 having to flee in hardest-hit Jonglei State alone. The damage to food production has increased vulnerability amongst South Sudan's population, 95% of whom rely on agriculture, fishing, and pastoral farming for their survival.

In the face of this destruction, people have taken matters into their own hands. Youth in Jonglei have tirelessly repaired broken dykes, while members of the diaspora - who collectively sent $1.3 billion back to South Sudan in 2019 - have been sending money to support flood victims this year.

These actions reveal the resourcefulness and solidarity of South Sudan's people. But it also exposes the inaction of the government, which many people feel has left them to scramble for their own survival. In the 2017 Climate Change Vulnerability Index, South Sudan was ranked among the top five "worst performing countries".

Although South Sudan contributes little to global greenhouse gas emissions, it is among the worst affected by the climate change crisis. In addition to annual flooding, drought is a recurring hazard that deepens hunger and desperation. This contributes to a devastating cycle of environmental collapse and local insecurity. In Jonglei and elsewhere, intercommunal violence frequently flares up and is exacerbated by competition over scarce resources and lack of government support. This instability can, in turn, make it more difficult for humanitarian agencies to deliver crucial assistance. In these situations, women tend to face greater risks and higher burdens.

From neglect to action

What is happening in South Sudan today is the result of a dangerous nexus of the climate crisis, ongoing conflict, and chronic vulnerabilities. It is also the outcome of a lack of intervention from authorities in Juba that is indicative of its careless governance. Since the 2018 peace deal, local governments have not yet been formed and the national government has largely ignored the issue.

Unless South Sudan's government begins to deal with the effects of climate shocks, its citizens will continue to pay the hefty price. Fortunately, there are several steps it can take.

To begin with, it can strengthen local initiatives to prepare for natural disasters and embrace climate-resilient agriculture. It can invest in local forecasting programmes that use data from sensors at river basins or flood defences in order to issue warnings when a flood is imminent. The government could also support existing community projects, which have extensive local knowledge and experience, to formalise their structures and enhance their disaster management activities.

South Sudan's government could look to develop effective water resources management strategies on a national scale too. To control flooding, it could construct levees along the Nile River and in low-lying areas with high populations that experience flooding annually. It could invest in water harvesting systems and reservoirs that can both alleviate rising water levels and store water for agricultural use in the dry season.

The resources required to build this infrastructure may be beyond the scope of the government alone. The private sector will therefore have to help source financial resources and provide technical capabilities. South Sudanese diaspora networks will also have to be engaged. And the government will need to collaborate with civil society organisations as well as international partners.

Due to the interplay between conflict and environmental degradation, it is essential that the climate emergency and peacebuilding are tackled concurrently. For conflicts to be resolved sustainably, solutions must include measures to strengthen local governance and ensure the equitable management and distribution of resources.

In all these initiatives, it will be crucial to ensure that a wide range of people - and particularly women - are involved in the planning, decision-making and implementation of climate action. If interventions are implemented without South Sudanese women's meaningful engagement, existing inequalities will be magnified, and the effectiveness of disaster resilience will be decreased.

Without these efforts, the climate crisis will continue to displace more people and aggravate tensions. The situation facing South Sudan calls for a paradigm shift that appropriately acknowledges and addresses the climate-conflict nexus. To avoid irreversible damage and loss, interventions must focus on peacebuilding, lifesaving, and disaster resilience altogether. These are trying times, but South Sudan has reached a turning point. It is a now or never moment for the country to take urgent collective action.

Ayak Wel is an activist, global health and water researcher, and sustainable development enthusiast. She has an MA in Globalisation Studies (MA) from McMaster University, Canada, and has done research on the underlying manifestations of conflict in post-colonial African societies. Garang Achiek Ajak is a social justice advocate and South Sudan analyst. He is a Master of Public Administration (MPA) candidate at Villanova University, USA.

South Sudan Okays Completion of Unity Government
Tagged:
Copyright © 2020 African Arguments. All rights reserved. Distributed by AllAfrica Global Media (allAfrica.com). To contact the copyright holder directly for corrections — or for permission to republish or make other authorized use of this material, click here.