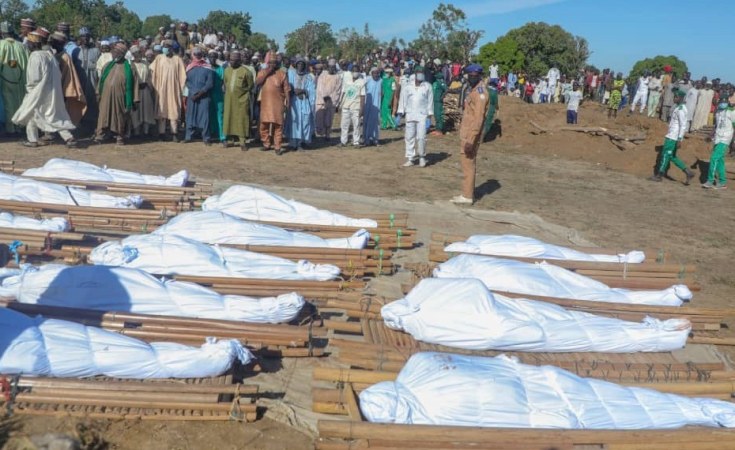 The factional leader of the dreaded Boko Haram insurgents, Abubakar Shekau has confirmed that his group was responsible for the killing of rice farmers in Kwashebe Zabarmari axis of Jere Local government Area of Borno State.

Shekau, in a three-minute video released on Tuesday, said his group killed 78 farmers because "the farmers arrested and handed one of its brothers to the Nigerian Army."

The group also warned that those arresting their members and giving out intelligence on their activities to the military will face the same fate if they did not desist from doing so.

"The third message is on those who notoriously nab our brethren and hand them to the military or give them a clue on us, you should know that, unless you repent, what happened to your people is awaiting you." he said.

There have been conflicting reports over the number of casualties as 43 deaths were earlier reported.

However, the UN humanitarian coordinator in Nigeria, Edward Kallon later revealed that at least 110 people were killed in the attack while the Nigerian Military insisted that only 43 died from the attack.

The Governor of the State, Babagana Zulum had earlier on Sunday participated in the funeral prayers for 43 (dead) victims of the attack.

Daily Trust reports that the victims, who were rice farmers, were attacked on their farms in Koshebe area of Zabarmari village, and murdered in cold blood.

One of the local hunters, who participated in a search and rescue operation, said most of the farmers found dead in the rice field had their throats slit.

"We have recovered 43 corpses. The attackers slaughtered all of them," he said.

"As we speak, there is great disquiet and mourning in our communities," the hunter said.

The Chairman Rice Farmers Association in Zabarmari, Malam Hassan, who corroborated the sad incident, expressed dismay over the senseless and vicious killing of innocent farmers, including children.

"It is very sad, for us, that these people went to their farms to work, only to be attacked and killed in this manner. So far, we have recovered 43 corpses, including children."