Namibia: Alcohol to Flow Until Midnight 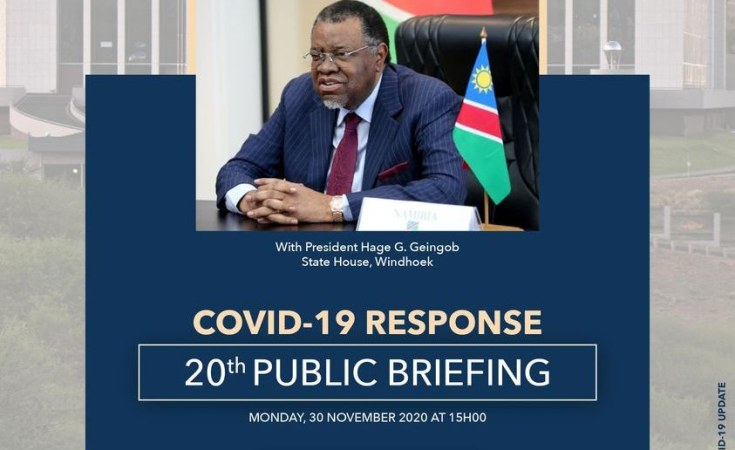 PRESIDENT Hage Geingob, while reminding Namibians that the coronavirus still has the country in its grip, has extended the sale of alcohol at nightclubs, shebeens and bars to midnight.

The president however yesterday said these businesses must ensure social distancing and all premises must be equipped with functional hand-sanitiser dispensers at all times.

Geingob also warned Namibians not to overcelebrate during the festive season,as Covid-19 was still ever-present.

"Shopping outlets and businesses will no longer be required to keep registers of persons visiting their premises. Registers should, however, be maintained at public events such as weddings, funerals, religious gatherings, sports and entertainment events," Geingob said.

From 1 December 2020 to 25 January 2021, public gatherings will remain limited to a maximum of 200 people, the president said and advised the public to have all gatherings outdoors.

The president thanked Namibians for the way they conducted themselves during political campaigns ahead of the regional council and local authority elections last week.

He said Namibians should bear in mind that Covid-19 is still a reality, amid festive season preparations. He says to date 14 345 people are confirmed to have contracted the virus in the country, with 151 deaths having been recorded.He added that Covid-19 is the biggest pandemic the world is facing, and Namibia has worked tirelessly to address it. He added that the labour ministry and the National Statistics Agency would ascertain the full scope of the impact on businesses, the economy and jobs.

The president added that the Covid-19 experience has not been pleasant, and Namibians should bear in mind that there is a possibility of a second wave.

He stressed that Namibians have become complacent, and are not adhering to regulations and urged Namibians to make themselves available for testing if they have been exposed.

Geingob said the prompt response by the government in addressing the pandemic had yielded results and prevented high numbers of confirmed cases. He cautioned citizens to observe physical distancing and other health regulations.

"This has been a challenging year. Although we were bent, we did not break," he said, urging Namibians to continue standing together and pull in one direction.

The head of state directed that all non-Namibian travellers arriving at the country borders should have Covid-19 test results that are not older than 72 hours, while Namibians with a test result older than 72 hours will be quarantined at own cost. The testing of a body for Covid-19 will only be conducted if the patient had symptoms.

Health and social services minister Kalumbi Shangula said Namibia's central solution to dealing with the pandemic is continued communication, and the government has created platforms for this communication.

Shangula added that Namibia is considering using rapid tests, and has approached international partners to make available over 100 000 rapid testing kits to be used for those arriving in the country.

Shangula said the number of healthcare workers contracting Covid-19 is worrisome, as 554 are confirmed to have contracted the virus, of which 530 had recovered and three died.

He said the ministry was allocated N$727 million by treasury, and roughly N$673million or 92% of this budget had been spent.

He further stated the reduction in the number of new confirmed cases has been a welcoming reprieve, and although the data does not point to a second wave, Namibia should continue being prepared for such a possibility.

Shangula added that there is an uptick of cluster cases at schools and prisons. He also added the cases recorded at Lüderitz are also a cause for concern and the situation is being monitored and additional staff have been sent to the town.

He disclosed that the ministry had acquired additional beds for intensive care units countrywide.

Previous Story
Next Story
Statement by President Hage G. Geingob on the Occasion of the 20th COVID19 National Update

Statement by President Hage G. Geingob on the Occasion of the 20th COVID19 National Update