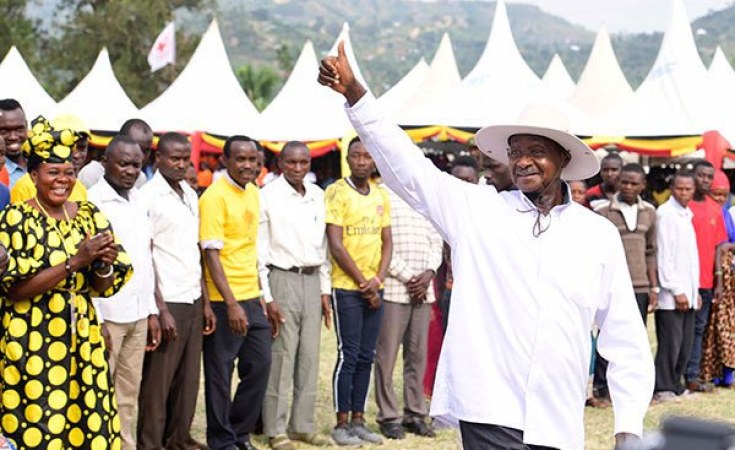 Presidential candidates have 42 days left to campaign ahead of the 2021 General Election.

This is happening at a time when the Electoral Commission (EC) is grappling with conducting an election within a pandemic to catch up with the two months lost during the lockdown restriction measures to prevent the spread of coronavirus.

According to the Presidential Election Act, 2005, Section 2(1) and (2); "The election of the president shall be by universal adult suffrage through a secret ballot using one ballot box for all candidates at each polling station.

The next president is expected to be sworn in on Wednesday, May 12, 2021, after a successful election. That means Uganda has 161 days left for a new president to be sworn in.

Considering the limited campaign time, candidates have complained of not only limited resources to traverse the country looking for votes, but the fatigue they are likely to face in the two months ahead.

The EC chairperson, Justice Simon Byabakama, announced that presidential candidates with approved campaign plans could begin to traverse the country to interact with voters across the 146 districts.

Officially, campaigns began on November 9, and are to run upto January 12 next year, two days to the election date on January 14, 2021.

Campaign time has been maintained from 7am to 6pm, the time curfew on boda bodas begin.

"The programme seems to be quite tight. The time is not enough. But we shall use it that way. We barely have a day to prepare and leave one district for another." Maj Gen Mugisha Muntu, the Alliance for National Transformation (ANT) party presidential candidate, said last month.

Due to the poor rural road networks, candidates are worried of fatigue as they race against time to conclude their campaigns within the time given by the EC.

"According to me, the time is not enough to move around the whole country. But you know, these dictators just dictate and we cannot even discuss it now. We just have to go with it," Mr John Katumba, an Independent presidential candidate, said.

Mr Arthur Katabalwa, the spokesperson for Renewed Uganda, the vehicle for Lt Gen Henry Tumukunde's presidential bid, told Daily Monitor last month that they have nothing to do to change the decision of the Commission on the campaign roadmap.

"Obviously, with the time given, plus the limited number of people we are allowed to see, (200), the campaign takes on a very tight schedule. I think most parties agree that the timeframe is not enough," he said.

He added: "That certainly is our position. But this is about Uganda and its people and we are committed to getting our message out there even in the (given) circumstances."

Whereas some parliamentary and presidential candidates are complaining of the limited time, others are optimistic they can make it in the prescribed timeframe and reach their voters.

"Anything is possible. We are going to do whatever is possible within our means to campaign," Ms Nancy Kalembe, the only female candidate in the presidential race, told Daily Monitor recently.

For a candidate to reach the 146 districts, it requires 81 more days to campaign in each district per day. With this comes the fatigue of driving in Uganda's poorly networked rural roads without rest.

Mr Paul Bukenya, the acting EC spokesperson, told Daily Monitor recently that the number of districts should not worry the candidates since the geographical area of Uganda has not changed.

He said there has been no election where candidates have physically reached all corners of the country. He advised them to use the media or their agents across their networks to reach potential voters in the areas they cannot physically reach.

But Uganda has ever held elections before where candidates campaigned for fewer days for one reason or another, according to the EC roadmaps. The law establishing the EC was promulgated in 1997. The first EC served from 1997 until 2002.

The current commission came into office in 2016 for a seven-year term, renewable once only. The current Byabakama-led commission replaces that which was headed by Mr Badru Kiggundu, which served two terms (2002-2009 and 2009-2016).

In terms of its appointment and Constitution, the EC is constituted by seven persons, including the chairperson and deputy chairperson, all appointed by the President and approved by Parliament. The members are supposed to be people of high moral and social standing and integrity.

The first presidential election in Uganda after about two decades of political instability had a rather short campaign period, with candidates campaigning for 39 days.

The May 9, 1996 election in which incumbent President Museveni emerged winner, had a 72.3 per cent voter turnout (about 8.5 million voters). An Interim Electoral Commission (IEC) appointed by the government organised the 1996 General Elections. The IEC was chaired by Mr Stephen Akabway, with Ms Flora Nkurukenda as his deputy.

Presidential candidates Muhammad Mayanja Kibirige, Museveni, and Paul Ssemogerere campaigned for 39 days from April 31 to May 8, 1996.

Mr Museveni was declared winner of the poll with 75.5 per cent of the vote. All the candidates were Independents, as political parties were still banned at the time.

On May 11, 1996, Washington Post's Steven Buckley reported?: "Museveni, 52, president since 1986, has effectively banned political parties, fearing they will stir the kind of tribal and regional strife that led to some one million Ugandans being killed under two dictators during the 1970s and early 1980s. The president urged voters to return him to office, saying he had brought the country stability and resurrected its economy."

But the subsequent election in 2001 was rather a showdown of five candidates against incumbent Museveni traversing the country within 48 days. Campaigns started on January 11, 2001 and ran upto March 10, 2001 and elections were held on March 12, 2001.

The incumbent, Mr Museveni, was declared winner with 69.4 per cent of the vote for a second elective term in office. Five candidates competed against him, including Kizza Besigye, a medical doctor and recently retired army colonel, Aggrey Awori, then Samia Bugwe North MP, Francis Bwengye, then secretary general of the Democratic Party (DP), Kibirige Mayanja, president of Justice Forum (JEEMA) and Chapaa K. Karuhanga, the president of National Democratic Forum (NDF).

The voter turnout was 70 per cent (7.6 million voters) out of the 10.8 million registered voters.

On February 23, 2006, Ugandans cast their ballots in presidential and parliamentary elections, in the country's first multiparty contest after 26 years. In July 2005, a referendum vote ended 19 years of Museveni's "no party democracy" rule in favour of multi-party politics. It was also the first tripartite elections, with voters electing the President and parliamentary representatives (including special seats for women) on the same day.

In August 2005, Parliament had voted to abolish presidential term limits, allowing Mr Museveni to extend his time in power. This explains why Mr Museveni has been consistent on Uganda's presidential ballot papers since 1996.

From December 16, 2005 to February 21, 2006, four presidential candidates campaigned for 67 days to unseat President Museveni in the February 23, 2006 elections. Only 69.2 per cent of Ugandans voted out of 10.5 million registered voters.

Mr Museveni was again declared winner with 59 per cent votes. Other candidates were Dr Besigye, then as the flag bearer for the newly established Forum for Democratic Change (FDC) party, Miria Obote, the wife of former president Milton Obote, who was the Uganda Peoples Congress (UPC) candidate, while former Kampala City mayor John Ssebaana Kizito stood on the Democratic Party (DP) ticket, and Abed Bwanika, who ran as an Independent.

The campaign periods seem to differ from one election cycle to another, but not more than three months as many candidates would wish for.

Only 8.3 million Ugandans accounting for 59 per cent of the registered 13.9 million voters cast their votes. Incumbent President Museveni was again declared winner for a fourth term by 68.38 per cent of the total votes.

His long-time political rival, Dr Besigye, managed a second place with 26 per cent of the vote.

For the 2016 presidential elections, Mr Museveni appeared on the ballot for a fifth term in office.

Claims of vote rigging and violence at polling stations were reported and voting was extended in several locations after reports of people not being allowed to cast their votes.

According to EC, Mr Museveni again won the polls with 61 per cent of the vote, with Dr Besigye coming second with 35 per cent. Out of the registered 15.3 million voters, 10.3 million (67.6 per cent) cast their votes.

According to the Presidential Election Act, 2005, Section 2(1) and (2); "The election of the president shall be by universal adult suffrage through a secret ballot using one ballot box for all candidates at each polling station.

Uganda's Political Train Running Full Speed Ahead of 2021 Polls
Tagged:
Copyright © 2020 The Monitor. All rights reserved. Distributed by AllAfrica Global Media (allAfrica.com). To contact the copyright holder directly for corrections — or for permission to republish or make other authorized use of this material, click here.