The Government is mulling a package that will incorporate several incentives aimed at improving teachers' livelihoods, members of both chambers of parliament heard on Tuesday, December 1.

Updating the MPs on the current status of the education sector, Prime Minister Édouard Ngirente said the government is constantly thinking of ways to improve teachers' livelihoods and how to encourage more people to join the teaching profession as a way to uplift the quality of education.

"We have been discussing a package that is looking at how best teachers' livelihoods can be made better. I cannot discuss the details because this is something that we are still discussing," he said.

Ngirente told the legislators that since March 2019, teachers' salaries had been increased by 10 percent and an additional 10 percent increment was made in this fiscal year.

He explained that the second increment should have started in July this year but there had been challenges that forced the arrears to be pushed to November this year.

"So far, 16 districts have paid these arrears and another 14 that hadn't done so will complete this exercise by the end of this week," he said.

For instance, Ngirente said that the government has started this process by putting education students on the same priority list as their Science, Technology, Engineering and Mathematic (STEM) counterparts.

To achieve this, a programme called the 'Teacher Career Path' was introduced to support the students pursuing from the time they pick interest in pursuing a course in education.

As part of the programme, any student who will complete their O' Level education with good grades and join a Teacher Training College (TTC) will be required to pay only 50 percent of their tuition. The rest will be covered by the government.

Upon completion in the TTC, the student who teaches in primary school for three years, will be given a free fully paid scholarship to pursue a Bachelor's Degree in education.

Upon completion of this degree, the teacher who then teaches in a secondary school for a period of five years will then be given a fully paid, non-refundable scholarship to pursue a Master's Degree in education.

Ngirente explained that the 'Teacher Career Path' program is a permanent one aimed at supporting a student who has chosen education as their profession of interest from the time that they are in secondary.

"What we are trying to do is groom motivated and committed teachers. This program will walk with the student from the moment they choose to pursue a course in education to when they complete. We are targeting students who will not only be teachers but we hope that we can interest them to be STEM teachers." he said.

In April this year, the government through Rwanda Education Board (REB) kicked off the process to disburse Rwf463.9 million allocated towards subsidizing school fees for best students who opted for TTCs after performing well in ordinary level exams.

Ngirente touched on the issue raised by MP Barthélemy Karinijabo regarding the government's decision to transfer teacher recruitment responsibilities from district authorities to the Ministry of Education instead.

"When it comes to teacher recruitment, we have heard teachers complaining about the challenges of being placed far from their homes. Is there a particular reason why teacher recruitment responsibilities were taken away from district authorities which had decentralised the process?" Karinijabo wondered.

In response, Ngirente said that the decision was made at the beginning of 2019 after deep analysis and assessment.

He said that it was decided that teachers should be given an opportunity to choose where they are more comfortable to be placed, a move that he said would, in the long run, benefit the students too.

"What we are doing right now is to give one exam, sat by all teachers who teach the same subject and we have a database where we inform the teachers the available places and they can choose where they want to go. This gives teachers a chance to choose but also offers our students an opportunity to share the available teacher resources," he said.

The premier acknowledged the issues that have in the past led to delays in salaries, saying that this has been fixed.

"We are aware of this issue and we decided that moving forward district employees will not get their salaries before teachers do. If it happens, there should be a good explanation," he said.

Government to Recruit Over 7,000 Teachers 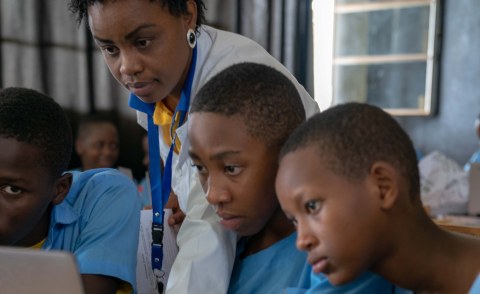 Advancing Africa's Knowledge-Economy by Investing in Teachers
Tagged:
Copyright © 2020 The New Times. All rights reserved. Distributed by AllAfrica Global Media (allAfrica.com). To contact the copyright holder directly for corrections — or for permission to republish or make other authorized use of this material, click here.