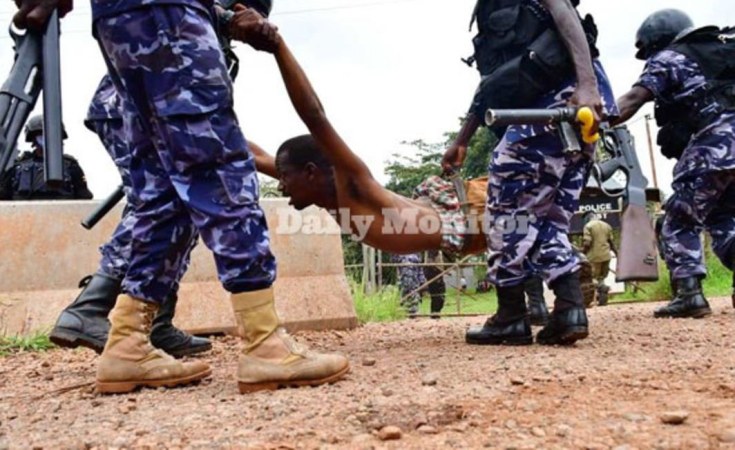 Opposition Forum for Democratic Change (FDC) party presidential candidate Patrick Oboi Amuriat yesterday engaged the police and other security agencies in a cat-and-mouse race for about three hours in Mbarara City where he was scheduled to hold his last rally at Kakyeeka Stadium.

This apparently took security unaware since they had anticipated he would use the direct Isingiro-Mbarara road, and probably divert him near Rwizi Arch Hotel and escort him to Kakyeeka.

Mr Amuriat, who had a convoy of six vehicles, took a road through Masha Sub-county with the intention to access the town centre from the western side via Bishop Stuart University.

After driving for about 15 km on a tarmac road, a Field Force Unit (FFU) police vehicle commanded by John Kaganzi tried to block him but were unsuccessful. This was at around 4pm.

A police lorry was parked in the middle of the road. Mr Amuriat jumped out of his vehicle, moved past the lorry and started running towards town.

Police tried to arrest him in vain. With the assistance of Rukungiri Municipality MP Roland Kaginda, he jumped on a boda boda and they sped off to town.

He rode on the boda boda around the streets with police chasing after him. His entourage that had been blocked at Buremba I soon entered town as the cat and mouse chase with Amuriat went on.

From the town centre, Mr Amuriat went to Ruharo and returned to Rwebikoona, where he hid for about 30 minutes. He emerged from a shop corner wearing a light blue shirt and a helmet, and he entered his waiting vehicle (he had earlier been in a dark blue attire with a black cap).

The convoy then drove around the town for about 40 minutes before police fired teargas and rubber bullets near Agip Motel and his followers scampered to safety.

He was escorted to Grand Holiday Hotel at 6.40pm, where he held a meeting with party leaders and candidates.

Speaking to Daily Monitor in an interview yesterday on why he decided to jump on a boda boda, Mr Amuriat said a good Samaritan gave him a ride and he could not resist the offer because he wanted to enter the city by all means.

"We were coming from Isingiro and entering the city for scheduled rallies to support my candidature and that of my members such as MPs, mayors but when reached the bridge at River Rwizi, we found the police, who did not want us to come to the city. A good Samaritan who was riding a boda boda gave me a lift until I was able to get to the town centre," Mr Amuriat said.

He said the teargas and bullets police fired yesterday were a blessing in disguise because much as police thought they were tormenting him, they were instead campaigning for him.

"Police did not want us to meet the people but we were able to meet the common person. In fact if I was the adviser of Museveni, I would advise him not to let the police to torment us because the more they do this, the more they make our work easy. Police is actually campaigning for us and if the dictator realises this early enough, he should stop this kind of foolish action that is trying to curtail us but in real sense, it is adding popularity for us," Mr Amuriat said.

Meanwhile, about six FDC supporters were yesterday arrested in the scuffle but Mr Amuriat said their legal team was working to secure their release.

He said his intention of reaching supporters in Mbarara City was achieved yesterday and he will thus proceed to his next destination today (Thursday). Mr Amuriat will be in Bunyaruguru, Bushenyi and Mitooma.

He also talked about the scarcity of clean and safe water in Isingiro, saying government has failed to address this challenge. He said his government would expedite the process of pumping water to Isingiro from River Kagera.