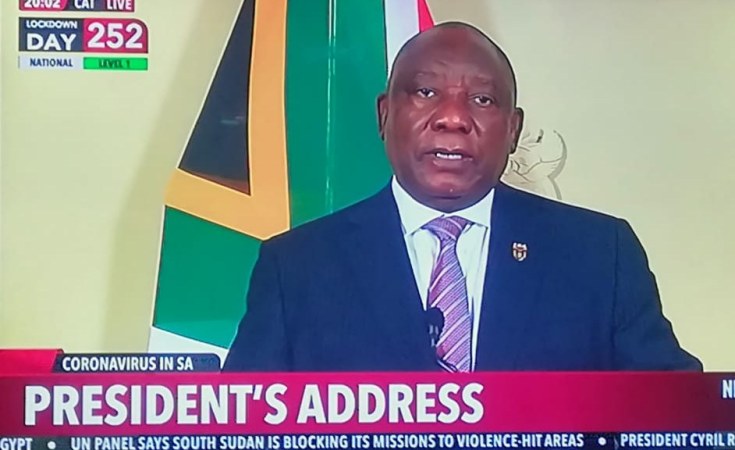 Government will at midnight implement additional measures in the Nelson Mandela Bay Metropolitan Municipality in the Eastern Cape, in an effort to contain the spread of COVID-19 and save lives.

Hospital admissions in these districts are on the rise. In some instances, the admissions are comparable to those during the first wave of infections.

"In the Eastern Cape and Western Cape, there has been an increase in both reported COVID-19 deaths and excess deaths. This must be a concern for every one of us," the President said.

In the coming days, the Minister of Health will visit the Sarah Baartman District and the Garden Route to assess the situation, and to engage with various stakeholders.

"Based on this assessment and the development of the disease in these areas, the National Coronavirus Command Council will determine the appropriate course of action," President Ramaphosa said.

In addition to the existing Alert Level 1 regulations, the following additional restrictions will apply in Nelson Mandela Bay with effect from midnight tonight:

The hours of the curfew will be from 10pm and 4am. This means that - except for emergencies - no person may be outside their place of residence between these times. This does not apply to essential workers, who are permitted to work during these hours.

The sale of alcohol from retail outlets will only be permitted between 10am and 6pm, from Monday to Thursday.

Alcohol consumption in public spaces, such as beaches and parks, is strictly forbidden.

Gatherings - including religious gatherings - may not be attended by more than 100 people for indoor events and 250 for outdoor events. At all times, the total number of people at a venue may not exceed more than 50% of the capacity of the venue.

All post-funeral gatherings are prohibited.

"These additional measures are necessary to contain the resurgence in Nelson Mandela Bay, to prevent outbreaks resulting from social gatherings and to protect the capacity of the healthcare system to provide care to those who need it.

"In determining these restrictions, we have sought to take steps which are absolutely necessary to save lives, while limiting disruptions to the economy," the President said.

After extensive consultation with traditional leaders, government has agreed that the summer initiation season in the Eastern Cape may go ahead.

"This is because traditional leaders in the Eastern Cape have submitted a risk adjusted plan, which has been approved by the Departments of Health and Cooperative Governance and Traditional Affairs.

"This plan includes strict adherence to health protocols, including screening of initiates, the provision of personal protective equipment, and the provision of water for hygiene and to prevent dehydration," the President said.

He said no initiation schools will be allowed in Nelson Mandela Bay due to the high rate of infection in the metro.

"The measures that are being taken in Nelson Mandela Bay are not meant to punish its residents. They are not intended to increase the hardship experienced by our citizens. These measures are needed to contain the spread of the virus and to save lives."

In order to maintain the current prevention measures, the National State of Disaster will be extended to 15 January 2021, in line with the Disaster Management Act.

All existing Level 1 restrictions remain in force throughout the country.

Efforts to Ensure Access to Covid-19 Vaccine On Track - President