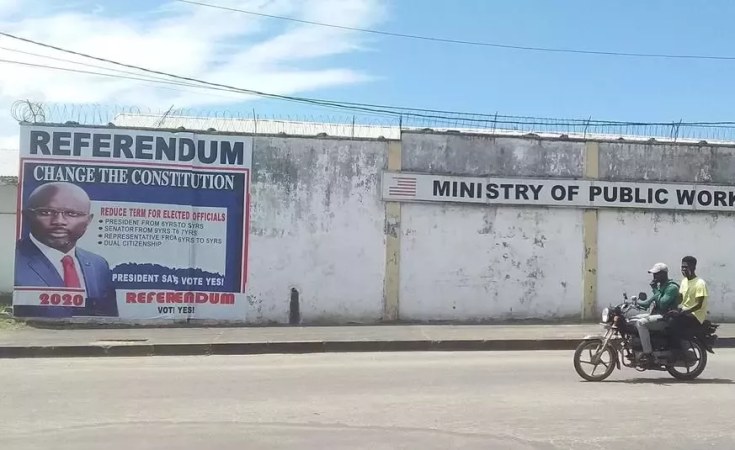 Darlington Porkpa/RFI
Liberians go to the polls on December 8 for midterm elections and a controversial constitutional referendum backed by President George Weah.
The New Dawn (Monrovia)

It's the final countdown to the Referendum and the Special Senatorial Elections (SSE) in Liberia, and the National Elections Commission (NEC) has recruited large numbers of people to train and to serve as NEC staff.

Victor Malu, advisor for the Liberia Motorcycle Transport Union in Gbarpolu, wishes that NEC recruited staff in the district in which they reside because they speak the local dialect and are familiar with the environment which would ensure a smooth voting process.

Gbarpolucounty, in northwestern Liberia, has also begun mass recruiting of suitable Liberians to serve as NEC staff on election day. Gbarpolu is one of 15 counties of Liberia that is faced with serious challenges, including poor roads and impassable paths to remote villages.

During the recent civic and voter education exercise, and the voter roll update, the NEC staff were unable to reach their assigned areas before the deadline. Fortunately, the NEC extended the deadline so that the NEC staff covered areas like Normondietono and other towns and villages in both Gbarma and Belle districts to educate citizens and register eligible voters to exercise their rights at the ballot box.

Gbarpolu County electoral magistrate, Ernest McCay Sr. assured that NEC will conduct massive recruitment of citizens from across the county for the December 8 elections and referendum. He said that the process that is already ongoing, is transparent because the recruitment is being conducted in all districts to avoid previous mistakes.

Regina M. Toe, a local clothes seller, believes that the majority of the youth who could benefit from NEC training to serve as staff will not be engaged, because they are busy seeking admission to schools, as parents struggle to find money to pay tuition amid serious financial challenge.

"The NEC needs to recruit more locals to explain the voting processes both for the senatorial election and the referendum before polling day on Tuesday", Madam Toe said.

The only female candidate in the race, BotoeKanneh, said that the National Elections Commission should conduct adequate education for staff recruited and ensure they do the right thing to have a transparent and peaceful election.

"From the last election, I observed that some of the poll workers didn't know how to put ink on our fingers after voting so they almost mark our entire finger rather than the fingertip", candidate Kanneh noted.

Madam BotoeKanneh, only female candidate from the county

NEC is organizing a referendum that includes 8 propositions to amend the Constitutions, and Special Senatorial Elections for 15 out of the total 30 Senate seats on December 8. Two by-elections for the House of Representatives are also organized in the Montserrado district 9 and Sinoe district 2.