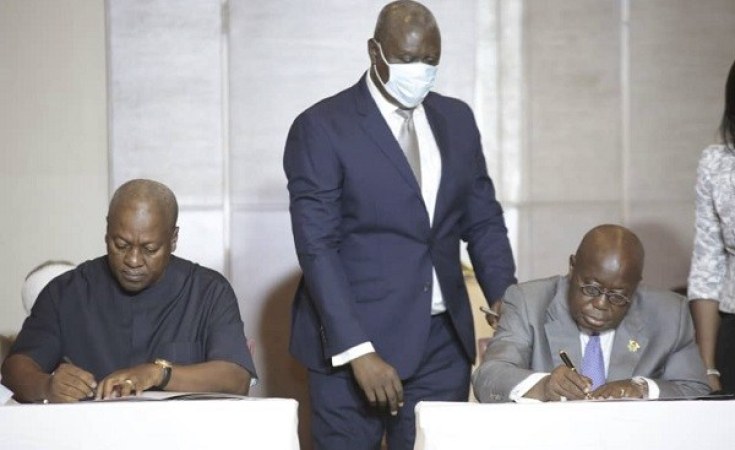 President Akufo-Addo who is contesting for re-election on the ticket of the New Patriotic Party (NPP), has been campaigning on the job performance of his government in the last four years, while the National Democratic Congress (NDC), Presidential candidate, former President John Mahama is promising of creating prosperity for all when he wins power.

The two presidential aspirants gave their commitments to a peaceful process in this year’s elections at the 3rd High-Level Meeting of the Presidential Elections Peace Pact 2020, organised by the National Peace Council in Accra Friday, December 4, 2020.

Speaking on the theme: “Eradicating Electoral Violence in Ghana’s Democracy: The Role of Political Leadership,” President Akufo-Addo said the peace pact, is the third he had signed to and on two occasions, he and the NPP had honoured their part of the peace pact.

He stressed that politicians, apart from the youth, women and children, stand to lose greatly if there is violence in the country.

President Akufo-Addo said the NPP had always been committed to a peaceful process in the country’s elections and tasked the security agencies to be vigilant and ensure a peaceful election, before, during and after.

On his part, former President John Mahama cited the Ayawaso by-elections blues, as well as the recent military personnel sent to guard and protect the country’s borders, including that of the Volta Region, as some of his and the NDC’s concerns going into this year’s elections.

Former President Mahama asked for a free, fair and transparent electoral process and asked that security personnel act professionally in the discharge of their duties to inspire confidence in the process.

Rev. Dr. Ernest Adu-Gyamfi, Chairperson of the National Peace Council in his introductory remarks said the NPP’s petition to challenge the 2012 elections at the Country’s Supreme Court alleging fraud was commendable.

Rev. Adu-Gyamfi said the ultimate decision to challenge the issues in Court by then-candidate Akufo-Addo and the NPP changed the course of elections in Ghana, “as resorting to violence is not the way to go.”

The Electoral Commission’s Chairperson, Jean Mensa, assured of a transparent process in this year’s elections while a representative of the Inspector-General of Police, COP George Akuffo Dampare assured that security personnel would conduct their activities professionally to protect the sanctity of the elections in the country.

Next Story
Tagged:
Copyright © 2020 GhanaToday. All rights reserved. Distributed by AllAfrica Global Media (allAfrica.com). To contact the copyright holder directly for corrections — or for permission to republish or make other authorized use of this material, click here.