What the Nomination of Ambassador Linda Thomas-Greenfield Means for U.S. Global Engagement and the U.S. Partnership with Africa 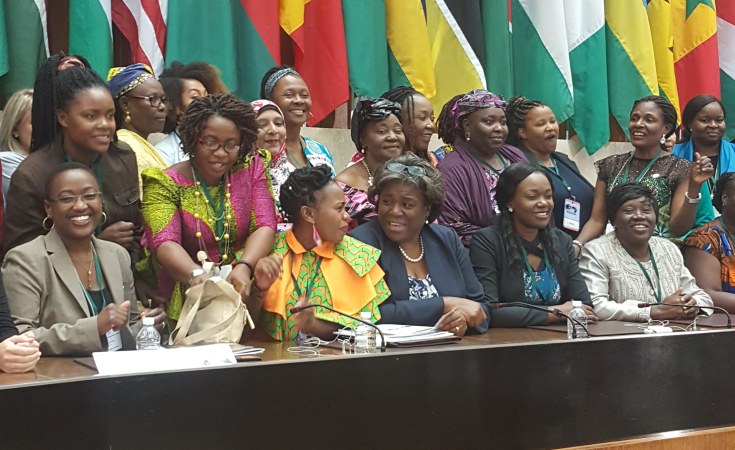 Washington, DC — President-elect Biden's nomination of Ambassador Linda Thomas-Greenfield sends a strong message that the incoming administration is serious about re-engaging the world not only with strong policy leadership and national security skills, but also ensuring that America acts in line with its core values when working with our partners.

Ambassador Thomas-Greenfield is the embodiment of the values that Americans hold dear, anchored in our Constitution, which calls upon us to return to robust world leadership; hold fast to our commitment to our allies; speak with one voice globally on behalf of the American people; and, equally as important -- do all of these things while remaining civil (even if we disagree with our friends).

Our bottom line as a modern nation has historically been to seek ways to make the world a better place by supporting democratic processes and principles.  Thomas-Greenfield will be our champion in working with every country in fairness and transparency all while ensuring that America's interest, and its national security always comes first. These are the skills she will bring to the position of U.S. Representative to the United Nations, if so, confirmed by the Senate.

The Ambassador is not only one of the best foreign service career diplomats - evident by her long stellar career at the Department of State - but she will also be the first African American female career foreign service officer to be nominated for a U.S. cabinet-level post.

At the State Department she held such key critical positions ranging from Director General of the Foreign and Civil Service – the number one personnel position with policy and implementation oversight of the 13,000-member Foreign Service, 11,000-member Civil Service, and the 45,000 local employees at our Embassies overseas, to Assistant Secretary of State for African Affairs -- on top of a lot of policy-tough and multilateral work in between from Pakistan to Geneva. For many, Thomas-Greenfield is seen as the best America has to offer to fill this august UN position as our next Global Ambassador.

It is her latter position as Assistant Secretary of State for African Affairs that should demonstrate to the continent that a return to global partnership and dialogue with the region is on its way back. There is not an African leader, or senior African diplomat - be they in Washington, D.C.  New York or in the region - that has not worked with her or know of her to be fair and inclusive, even when being tough.

But more importantly, it is the mutual respect that she will bring to the table that will be the most compelling to her African counterparts and the African people. Make no mistake that the top Africa-focused diplomatic job as Assistant Secretary of State has become a national security issue position as well given the number of challenges and conflicts in the region over the last decade. Thus, Thomas-Greenfield is ground-tested on these; knows the political and economic issues; has traveled extensively on the Continent, most notably to many of its towns and villages; and, is committed to addressing sustainable development issues from education to migration to food security. Hence, knowing the region on the macro and micro levels.

Linda will build mutual-respect and a return to global partnership and dialogue.

During her time as U.S. Ambassador to Liberia, Linda could be found often helping on these sustainable development issues and working with local leaders.  Her strength as a diplomat during the tragic 1994 Rwandan genocide is a  well-documented story reflective of a mixture of resolve, heroism, composure, courage, strength, toughness, negotiating skills and knowing how to manage a crisis – even when held at gunpoint.  The American people should expect this same mixture of unique skills from its top diplomat at the UN and we will get them with Thomas-Greenfield at the helm.

For Africa though, her presence at the UN world body represents an opportunity for the U.S.- Africa relationship to be both rebuilt and flourish, becoming a true deliberative process with the Continent on a global stage.

Linda is often quoted, in part, as saying "I'm not trying to change the world," but her time at the UN, if Senate confirmed, will be just that - an opportunity to change the world, and particularly the direction of the U.S. engagement with Africa. This includes, however, being tough on non-democratic governments and their leaders.

The IMF notes that Africa is on course over the next decades to host the world's largest working age population, on top of having the youngest population. It is the Continent of the future, despite the serious conflicts (e.g. Ethiopia), and myriad of political, social, and economic challenges it faces today (and there are many), on top of COVID-19.

That being said, it is a region that the U.S. needs to view and engage with differently (not only through the China geo-political lens), especially given how interconnected the world is and the impact Africa will play politically and economically in the future. Indeed, her nomination with all its uniqueness, represents an opportunity for the U.S. to build on the solid and goodwill relationship Linda already has in the region – with its democratic leaders and its people.

The Continent and the U.S. should look forward to it.

Author Note: Dr. Robin Renee Sanders, the CEO of FEEEDS, was formerly a U.S. career foreign service officer who served as ambassador to Nigeria, the Republic of Congo, U.S. representative to Ecowas, and Africa Director at the National Security Council.