Rwanda Seeks to Turn Around Manufacturing Amid Covid-19 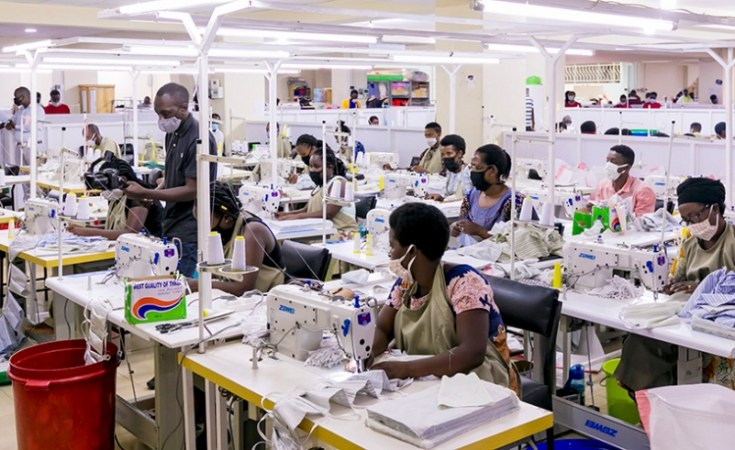 These are just but a few challenges among many that still limit the manufacturing growth fortunes, despite the sector considered key to driving economic growth and transformation.

When the Covid-19 pandemic hit, many industries closed temporarily while others with limited capacity, particularly emerging firms like small and medium enterprises, permanently shut down.

The pandemic had a huge toll on industry, with estimates showing that the sector contracted at the rate of 19 per cent in the first half of the year.

Yet, the manufacturing sector was estimated to grow from 17 per cent in 2014 to 37 per cent by 2024, driven mainly by demand from rapid growth and development.

That, however, manufacturers think will be achieved only if a series of existing challenges are addressed.

Andrew Kanyonya, the Business Development Manager at the New Kigali Designers and Outfitters, a local garment company, say the skills gap is one of the challenges.

"Where we are right now is at the level where we need technical transfer because there's a skills gap and it's a huge challenge to any manufacturing subsector," he said.

In a garment subsector, for instance, he proposed a need to establish a 'Textile College' from where individuals that offer skills and teach techniques of the industry.

In the meantime, he thinks, the government can collaborate with the industry to establish programmes that enable manufacturing factories to hire experts at subsidized rates.

At the moment, Kanyonya indicated that the industry doesn't have skilled middle managers - production managers - and hiring them can cost up to $4,000 per month on a two-year minimum contract.

"Only a few here can afford that," he noted during the meeting of domestic manufacturers in Kigali on Friday, December 4.

Rwanda's manufacturing sector is dominated by agro-processing such as staple food, meat, and dairy products, as well as light manufacturing which comprises soaps and detergents, pesticides, garments, wood and pharmaceuticals.

The industry is also driven by construction materials (cement and tiles, plastics, paints, and metals), and other cross-cutting enablers like paper and plastic packaging, as well as glass bottles and containers.

However, the country still faces a high supply deficit gap between the production of these products and imports, even though existing industries still have capacity to produce them.

Philip Lucky, the Head of Investment at the Rwanda Development Board, said for example the country still imports staple foods like rice, maize and daily products like meat and chicken.

He mentioned Africa Improved Foods, an agro-processing firm, which still imports most of their maize from Malawi and Tanzania, and rice that is still imported from Pakistan and Tanzania.

Sugar is dominated by imports from Brazil and Egypt.

"There are domestic supply gaps in garments and pesticides, and low utilization capacity in soaps and detergents, and many other industries," he noted.

Statistics from RDB show that local manufacturers only supply 11 per cent of the sugar market, 4 per cent of wood, 10 per cent of garments, and 18 per cent of plastics markets.

The maize and rice markets are supplied at 35 per cent and 45 per cent respectively.

Many domestic factories produce at 30-50 per cent on average of their capacity. Some even go below 30 per cent, take rice, with 25 factories across the country that produce at around 25 per cent.

Working capital, specifically for industries with low financial capacity, is hard to access. The current guarantee fund at the Business Development Fund (BDF) is not utilized.

Kanyonya believes this is because meeting the criteria is hard for many young industries. "If you are looking for Rwf100 million, the fund requires 120 per cent collateral. Not many startups can afford this."

But that's not all, the current investment code provides many incentives for investors.

Investors who invest more than $50 million get a 7-year corporate income tax (CIT) holiday, and those that export more than 50 per cent of their products outside the East African Community get a 15 per cent preferential CIT.

Moreover, businesses that add domestic value that is more than 30 per cent to their products and services enjoy lower import duties such a zero per cent tariff on raw materials.

Yet, businesses think only that helps large corporates and foreign companies that have the luxury of deploying massive investment capital for a long term, which renders small players at a competitive disadvantage.

"How can you compete at the market with someone who gets all that preferential treatment?" one local entrepreneur who's in the process of starting the production of pipes inquired.

The government, however, is working to revise the strategy to promote local manufacturing to enable it to drive economic recovery, according to RDB's chief executive Clare Akamanzi.

Led by Prime Minister Edouard Ngirente, the government initiated a 'manufacturing acceleration committee' that is going around on ground to assess the sector.

"We were tasked by our leadership led by the Prime Minister to assess the 'must-have' products, do whatever required to empower industries invested in making them available," she noted.

That result is expected to see change in policy actions that support local industries. Already, the new investment code establishes a financial scheme for SMEs.

It also seeks to attract angel investors to support early-stage companies, and provide for incentives such as a provision of 150 per cent deduction on expenses related to exports.

The pandemic had a huge toll on industry.