Africa: 'Skills, Technological Advancement, Will Give us the Africa We Want' - President Tells AU Assembly

Monrovia — The President of the Republic of Liberia, His Excellency Dr. George Manneh Weah, has called on African countries to focus efforts on crafting policies and programs that can create skills and technological advancement on the continent. Delivering a statement on behalf of His Excellency, Dr. George Manneh Weah, President of the Republic of Liberia, at the African Union (AU) 14th Extraordinary Session on Sunday, December 6, 2020, via virtual in Monrovia, the Liberian Foreign Minister reminded heads of state of the prime objective of the AU.

"It is a little over fifty-seven (57) years since independent African States converged in Ethiopia to establish the Organization of African Unity, now the African Union (AU); with the aim of defending the sovereignty, territorial integrity and independence of African states, and dedicated to the eradication of all forms of colonialism on the African continent," the Statement read.

President Weah said the assembly was an opportunity for the continent to reflect and build on collective efforts towards addressing and removing fundamental causes and drivers of conflicts.

"Excellencies, you will all agree that this session provides us with an opportunity to reflect and build on our collective efforts towards addressing and removing the fundamental causes and drivers of conflicts; particularly the proliferation of illicit weapons from the possession of civilians, which is expected to contribute to silencing the guns on our continent", the statement said.

The Liberian diplomat extended fraternal greetings and best wishes from His Excellency Dr. George Manneh Weah, President of the Republic of Liberia, who attended and spoke at Saturday's Session on the African Continental Free Trade Agreement (AfCFTA).

"I speak to you today in representation and on behalf of His Excellency President Weah, Mr. Kemayah further clarified.

The main purpose and objectives of the Organization were re-ordered in 2002 to focus on today's major challenges for Africa, which can be described as achievement of sustainable socio-economic development, which can only be attained through a peaceful environment.

According to Ambassador Kemayah, this year's assembly was held under the team theme: "Silencing The Guns"

"Excellencies, distinguished ladies and gentlemen, as we who lead the Continent meet virtually today under the theme: " Silencing The Guns", we cannot overemphasize the importance of working together as Africans to ensure that Africans live freely and happily, in peace and prosperity, thus meeting the objectives of this great body".

The Minister reaffirms Liberia's commitment to continue to work with other countries in the region and the rest of the continent to achieve Africa's goal of a conflict-free Africa. "We must strive to make peace a reality for all our people and to rid our continent of wars, civil conflicts, human rights violations and humanitarian disasters".

The Liberian Government said the stigma of a 'continent at war with itself' has long been attached to Africa; and this narrative we must change. "We can only achieve a united and prosperous Africa if the guns are silenced".

"To this end, we must do all in our power to work towards achieving the African Development Agenda 2063, which clearly projects the Africa we want, Minister Kemayah Said.

The Liberian government said, although safety measures are taken globally to put an end to the COVID-19 Pandemic which has engulfed the world, Africans must continue to exert collective efforts to end other ailments on our Continent

Minister Kemayah said rather than engaging in wars and civil conflicts, African countries must collaborate more effectively in devising policies and programs that can create skills and technological advancement. "In so doing, we will create the Africa we want. This is the time for unity - a time for silencing the guns, as in unity, success is sure".

The Minister concluded by calling on Africans from all walks of life to remain committed to the goals and aspirations of a united, peaceful and prosperous Africa, free of armed conflict. "The guns must therefore be silenced for good".

'Silencing the Guns in South Sudan is Not Enough' 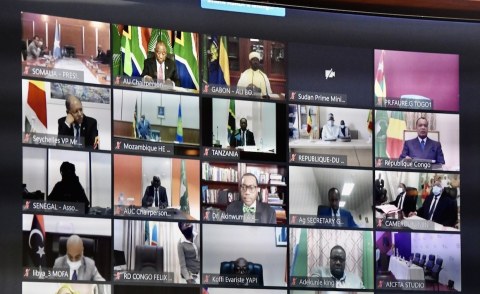 Covid-19, Conflict on the Agenda At AU Summit
Tagged:
Copyright © 2020 FrontPageAfrica. All rights reserved. Distributed by AllAfrica Global Media (allAfrica.com). To contact the copyright holder directly for corrections — or for permission to republish or make other authorized use of this material, click here.

Museveni Sworn In, Vows to Ensure Welfare of Ugandans
Entertainment