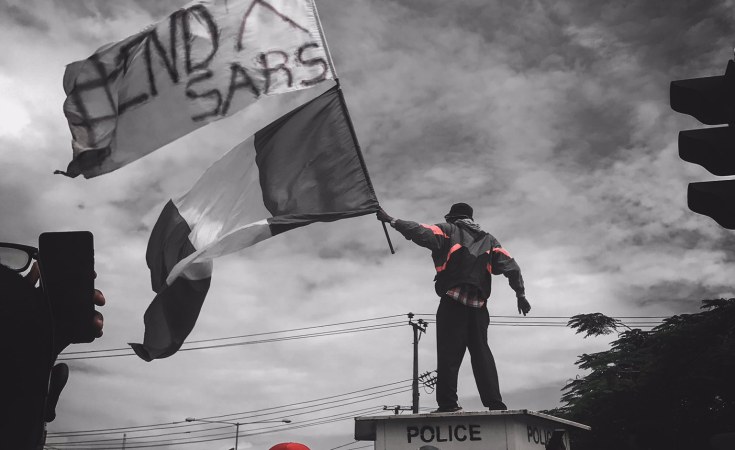 He said this as protests resurfaced in Oshogbo, Osun State Monday.

President Muhammadu Buhari Monday in Abuja warned that "any act of hooliganism hiding behind lawful and peaceful protests will be dealt with decisively to ensure peace and stability in the country."

Virtually declaring open the Chief of Army Staff's Annual Conference 2020, Mr Buhari commended the Nigerian Armed Forces for their efforts at restoring law and order in various states during the unrest that ensued in the wake of the #ENDSARS protests.

Mr Buhari said his government was committed to the rights of citizens to embark on peaceful protests responsibly and in accordance with the laws of the land.

He however said the #ENDSARS protests were "sadly hijacked by hooligans to cause wanton damage to lives and property in many cities across the country."

He said this as protests resurfaced in Oshogbo, Osun State Monday.

The president described the Year 2020 as a very challenging one, citing the outbreak of the COVID-19 pandemic and its negative impact on almost every aspect of national life.

"Despite this, I am pleased to note that the Army remained resolute in the discharge of its Constitutional roles and in keeping the wealth and welfare of our soldiers a priority.

"The Army's support of Civil Authorities in the management of the COVID - 19 Pandemic is a case in point.

"Also, the peaceful elections conducted in Edo and Ondo States would not have been achieved without the high level of professionalism displayed by all security agencies, including the Army," he said at the conference themed "Human Capacity Development in Sustaining Professionalism and Responsiveness of the Nigerian Army in the Discharge of its Constitutional Roles."

He commended the Army for its commitment towards curtailing the activities of insurgents, armed bandits, kidnappers, cattle rustlers and other violent criminals through ongoing exercises and operations in different parts of the country.

He said the Exercise SAHEL SANITY launched a few months ago in the North West states to rid the Katsina-Zamfara corridor of marauding bandits had recorded commendable progress.

"I have also been briefed about the tremendous successes that have been achieved by troops during the ongoing Operation FIRE BALL in the North East.

"I charge you all to sustain these efforts until the full restoration of peace and security in the nation is achieved," Mr Buhari told members of the armed forces at the conference which provides an avenue for the leadership of the Army to re-assess its preparedness and operational readiness in carrying out its Constitutional roles.

President Buhari also used the occasion to pay tribute to men and women in uniform who have paid the supreme sacrifice in the defence and security of the nation, commiserating with their families, comrades and friends.

"As we pray for the repose of their souls, we must strengthen our collective resolve to address those issues that will make every part of our country a safe and secure place to live and carry out our normal business," he said.

He pledged that his administration will not relent in its efforts to take adequate care of families of fallen heroes who had paid the supreme sacrifice in the fight against insurgency and other forms of crimes across the country.

At the conference, the president launched the Housing scheme for Next of Kin of personnel of the Nigerian Army killed in action.

"It is in line with this that the Army as part of its welfare initiative and in line with the Federal Government's housing programme is undertaking the Housing Scheme for families and next of kin of troops that were killed in action in the fight against insurgency and other criminalities in the country.

"I believe this initiative will act as a huge morale booster to the troops on the frontlines as well as project the Army in good light.

"On our part, I assure you that this administration will continue to do all within available resources to provide for your operational and welfare needs," he said.

President Buhari said he had been briefed that some of the major capabilities procured for the Army will soon be inducted into the various theatres of operations, urging personnel "to make judicious use of these capabilities, even as we await the arrival of others currently pending shipment to the country."

On the choice of the theme of the annual conference, President Buhari noted that it is only through human capacity development that any institution can attain the level of professionalism needed to effectively and efficiently carry out its Constitutional roles.

The president, therefore, congratulated the Army on holding this Conference at the magnificent edifice housing the Army's Cyber Warfare Command with its state-of-the-art Cyberwarfare Operations Centre, adding that this shows that the Army is alive to the changing nature of warfare which is gradually moving into the cyber domain.

"By the same token, I commend the visionary leadership that has worked assiduously to emplace this vital capability that will fill an existing gap in our nation's security and defence architecture.

"This and other numerous infrastructural projects that have been embarked upon in recent times by the leadership of the Army has shown good utilization of scarce national resources," he said.

Earlier, the Minister of Defence, Bashir Magashi, appreciated the president for always approving funds for operations of the military in the country, assuring that all resources will be judiciously utilised.

The Chief of Army Staff, Tukur Buratai, noted that the Nigerian Army was well poised to confront all security challenges, which includes cyber threats.

What I Told 36 Governors - Buhari 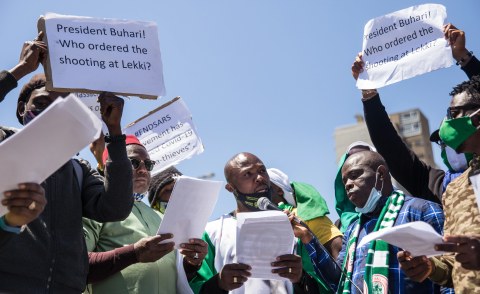 Buhari Vows to Prevent Repeat of Anti-Police Brutality Protests
Tagged:
Copyright © 2020 Premium Times. All rights reserved. Distributed by AllAfrica Global Media (allAfrica.com). To contact the copyright holder directly for corrections — or for permission to republish or make other authorized use of this material, click here.