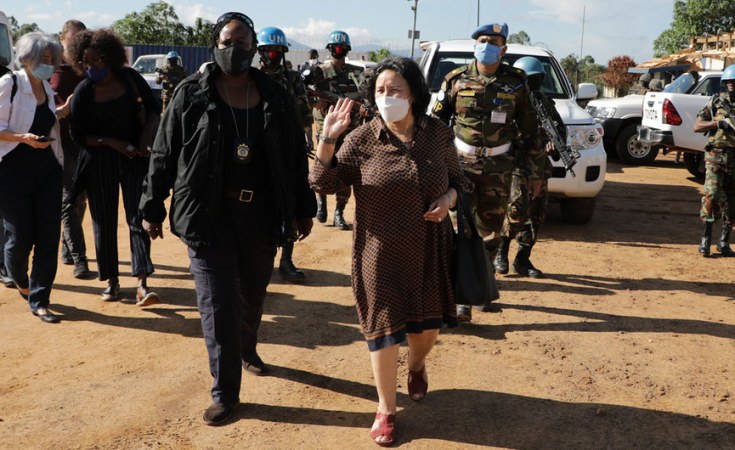 There is a critical need for State institutions in the Democratic Republic of the Congo (DRC) to provide more stability and safety for citizens facing multiple threats, the head of the UN mission there told the Security Council on Monday.

Leila Zerrougui, Special Representative and Head of the UN Stabilization Mission in DRC (MONUSCO), warned of heightened political tensions in the country, including fissures within the ruling coalition and a presidential threat to dissolve the national assembly.

Over the past month, the mission's leadership has met with numerous representatives, including civil society leaders, to diffuse "further provocations" that threaten security and economic stability, encouraging them to "resolve their differences through dialogue", she explained, assuring that the UN would continue "to facilitate an expeditious and peaceful resolution".

Noting the importance of accountability for perpetrators of atrocities, the Special Representative highlighted the recent trial and conviction of Ntabo Ntaberi Sheka for war crimes, including rape, sexual slavery and the recruitment of children, saying the resolution "represents an important step forward for the Congolese military justice in combating impunity".

The UN official expressed concern over the situation in Eastern Congo, where "insecurity, grave violations of human rights and displacements continue to affect civilians, notably women and children".

She updated that national and foreign armed group violence persists in the territories of Ituri, North Kivu and South Kivu, which serve to "highlight the crucial role" of the MONUSCO force in expanding state authority and "deterring violence against civilians".

Other severe challenges include the theft of natural resources by armed groups, which, according to Ms. Zerrougi, require "regional and international efforts" to tackle.

At the same time, she saluted Congolese authorities for their efforts to "engage constructively with the country's neighbours to resolve their differences, foster regional economic cooperation and consolidate regional peace and stability".

The UN envoy also upheld that MONUSCO would continue to liaise closely with the Secretary-General for the Great Lakes to support the Government and work closely with the African Union, the International Conference of the Great Lakes Region and the Southern African Development Community (SADC) "to ensure synergies and to make certain that our joint investment in supporting regional stability brings maximum results".

"Protection of civilians remains a central priority for MONUSCO", the Special Representative asserted.

Against the backdrop of a deteriorating humanitarian situation in conflict-affected provinces, she flagged that although MONUSCO continues to use a "whole-of-mission approach" - involving civilian, military and police components - protecting civilians is "heavily dependent on unimpeded access to those in need".

"The ability of humanitarian workers to support the Congolese authorities is absolutely essential to relieve the suffering of victims of conflict and was key to ending the 11th Ebola outbreak in Equateur Province", she stressed.

As the UN pledges to maintain support for its protection responsibilities, the impact of COVID-19 is making it increasingly more difficult.

In highlighting the coronavirus' impact on MONUSCO, the mission chief revealed that 173 personnel had tested positive for COVID-19, six of whom have died after contracting it.

She attested that all possible measures to minimize the spread and manage cases have been put into place.

To date, MONUSCO operates in the capital Kinshasa and six other provinces.

The Special Representative informed the Council of fresh discussions with the DRC Government to facilitate the phased drawdown of the mission, envisioning tailored "province-specific strategies" to consolidate its footprint in the most conflict-affected territories of North Kivu, South Kivu and Ituri.

As State authorities are ultimately responsible for civilian protection, she concluded by saying that MONUSCO is supporting the Government's national police reform plan; advocating for new disarmament, demobilization and community reintegration frameworks for ex-combatants; and stands ready to step up international support coordination efforts for security sector reform.

It's Back to Old Rivalry As Kabila-Tshisekedi Coalition Ends

President Tshisekedi Wants 'Sacred Union' for DR Congo
Tagged:
Copyright © 2020 UN News Service. All rights reserved. Distributed by AllAfrica Global Media (allAfrica.com). To contact the copyright holder directly for corrections — or for permission to republish or make other authorized use of this material, click here.