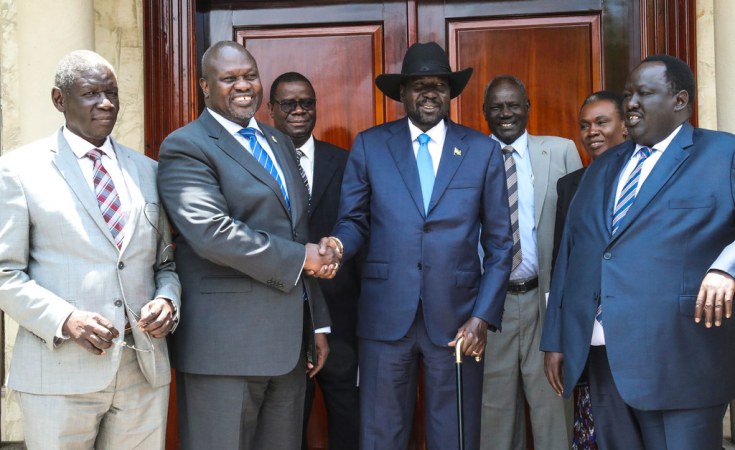 British and American diplomats have asked President Museveni to leverage on South Sudan leaders to hold election after the Ugandan leader proposed that only a vote can resolve the political and security impasse in Juba.

Mr Museveni broached the idea of fast-tracking polls in South Sudan with the London and Washington DC envoys during a meeting in the eastern Jinja Town at the wekend, a State House statement indicated.

"Me, I want to push them (South Sudan) to elections... elections will force them to make alliances and this problem will be history," the President was quoted as saying, citing how Kenya resolved its past political conundrum.

At the meeting were the UK High Commissioner to Uganda, Ms Kate Airey, and Ms Natalie Brown, the US ambassador to Uganda, both diplomats have just taken their post in Kampala.

They were accompanied to the meeting by Stuart Symington IV and Robert Fairweather, the American and British especial envoys for South Sudan, respectively.

The role of ambassador Fairweather, a career diplomat, is to support "international efforts to secure a durable and peaceful resolution to conflict between Sudan and South Sudan, as well as ending internal conflicts and encouraging sustainable development throughout both countries", according to information on UK government website.

The Trump administration has detailed ambassador Symington IV to "lead US efforts to support the peace process and a successful political transition in South Sudan."

According to State House, Amb Symington IV, in a rejoinder to President Museveni's proposal for urgent elections in South Sudan, "asked the President to encourage them (South Sudan leaders) to do so and move forward".

"If you (Museveni) could advise President Salva Kiir and Riek Machar to take the direction of elections, this problem will be history. You are the person who can give them confidence," he reportedly said.

The US, UK and Norway under the Troika arrangement are international guarantors of the peace process in Juba and their consultations with President Museveni was, according to officials, in line with Uganda being a neighbour and having played a key role in the security situation in South Sudan.

"We have seen and appreciate the work Uganda and the neighbours are [d]oing in South Sudan," Ambassador Symington IV said, ahead of the diplomats' scheduled trip to Juba for a maiden meeting with President Salva Kiir and his Vice and political rival Riek Machar.

South Sudan Opens Door for Kiir Second Term
Tagged:
Copyright © 2020 The Monitor. All rights reserved. Distributed by AllAfrica Global Media (allAfrica.com). To contact the copyright holder directly for corrections — or for permission to republish or make other authorized use of this material, click here.