South Africa: In South Africa, It's Full-Scale Battle for Heart and Soul of ANC 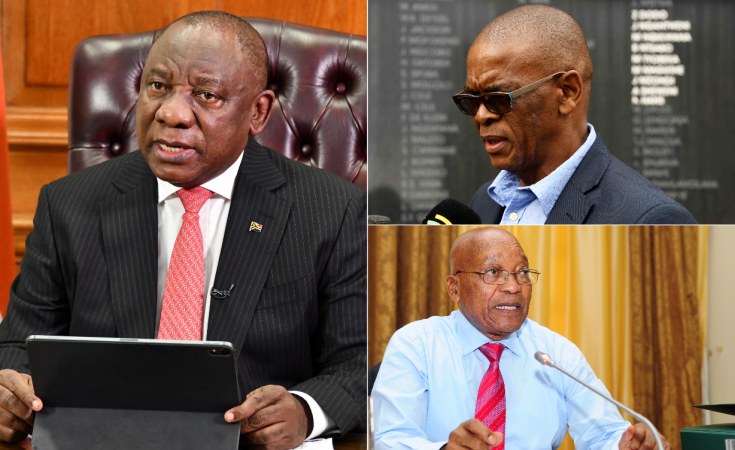 The African National Congress (ANC), the oldest liberation movement on the continent and the party of Nelson Mandela, is currently "at battle" within itself as factions face each other down over the fate of its high-flying figures accused of corruption.

The party's national executive committee has been meeting since Sunday night in what amounts to a proxy battle between former president Jacob Zuma - who tomorrow (Tuesday, December 8) returns to court to face 783 counts of fraud, racketeering and money-laundering - and current SA President Cyril Ramaphosa.

When Ramaphosa beat Zuma's ex-wife in December 2017 to take helm of South Africa's ruling party, a sharp division became apparent in what had been a largely united anti-apartheid movement, and subsequently the country's first democratic administration under Mandela.

That division has deepened dramatically since Ramaphosa's win, and the ANC is now split from top to bottom, including in its national executive, currently in session to determine whether Zuma ally, party secretary-general and top administrator -- Ace Magashule -- must stand aside as had already been decided by the party he should - having been charged with corruption.

But Magashule, aware that out of position he is out of power and likely to go to jail - or at least, be fighting jail-time from a weak position and without the powerful ruling party at his beck and call - has sworn that he will not step down, taking instructions, he has insisted, "only from the (ANC) branches".

This last-ditch bid to remain at the helm of party power is what is under debate as Ramaphosa manoeuvres to avoid direct involvement in what has become a fight "for the heart and soul" of the ruling party, Magashule being the last of Zuma's party allies still to hold a senior position.

Ramaphosa's problem has been that from the moment he took over the ANC, he has been dealing with a "fight-back" campaign by the pro-Zuma lobby.

The Zuma-ists want, in the first instance, to avoid jail-time, Ramaphosa now having begun to fulfil his promise of action against corrupt elements in the ruling party and government, no matter what their rank or power.

Although Zuma's supporters have been looking for opportunities to effectively slow or roll back Ramaphosa's reforms of, among other institutions, the national prosecuting authority, leading investigative bodies and senior policing ranks, they have been losing ground steadily.

That means the outcome of the party's national executive committee (NEC) of 80 members - plus the "top six" functionaries, of which Magashule is one - will decide, in effect, which direction the party and the country will go.

Ramaphosa enjoys substantially more support within the national executive of his party than when he took over, but there are still loud voices from the Zuma era attempting to put Ramaphosa in a "no-win" position.

They point to some around Ramaphosa, even Ramaphosa himself, as somehow being implicated in corruption, Ramaphosa's former spokesperson having been tainted through a familiar relationship.

The pro-Zuma faction has focused special attention on one of Ramaphosa's closest supporters in government, State-Owned Enterprises Minister Pravin Gordhan, including during the critical national executive meeting still under way.

This has been done in part to weaken Ramaphosa and in part out of personal animus against Gordhan in the Zuma camp.

Gordhan has effectively fought back in the courts against smears and attacks on him from Zuma-aligned elements, including the Public Protector (PP), who issued a report on a so-called special "rogue" tax collecting unit to which Gordhan gave the green light.

It was this unit that was closing in on Zuma's "friends", allegedly involved in illegal cigarette sales, when it was disbanded amid fake stories planted in local media that it was somehow "illegal".

The report by the PP required Ramaphosa to immediately fire or suspend Gordhan.

Neither Ramaphosa nor Gordhan accepted it, both launching successful challenges in court.

Gordhan has, meanwhile, continued to root out corrupt or incompetent elements within SA's 200 state-owned entities, almost everyone one of which is broke, and drawing further ire from Zuma-aligned elements.

Ramaphosa and Gordhan, having won in repeated court clashes over the Public Protector's report on Gordhan and his alleged "rogue unit", have today (Monday 7 Dec) received a major boost from the Constitutional Court, which has closed out that matter with a full vindication of both.

In timing that could have come from a Hollywood movie script, the Constitutional Court issued a damning final ruling on PP Busisiwe Mkhwebane's findings against Gordhan, even as they were being used against Ramaphosa in the NEC 'battle'.

The apex court found her to have "failed at every point" in making what it said was a series of "irrational" findings in conduct that was "egregious" and not befitting the post of PP, which is meant to be that of the protector of the public against government abuses.

The extremely severe adverse findings against the PP, worse even than prior adverse and harsh judgments against her, included a punitive requirement to personally pay 15 per cent of the cost of the action - the second time she has personally received so severe a rebuke from the highest court.

This has much strengthened Ramaphosa's hand as he deals with what is a full-scale effort to undermine his position and eventually to oust him.

Those aligned with Zuma, who had been loudly calling for Gordhan to go, based on the PP's report, have been left red-faced and wrong-footed by the devastating Constitutional Court judgment.

It comes as a heavy blow to the pro-Zuma faction, signalling that their use of the courts as a delaying tactic, for which Zuma is infamous, is backfiring badly.

Reflecting the seriousness of the situation was the unexpected appearance of former president Thabo Mbeki in the ANC's national executive proceedings.

Mbeki was unceremoniously tossed from the ANC's top post by Zuma and his allies in 2007.

His return to the arena of contestation within the party was considered a mark of the seriousness of what is going on within the ANC as it struggles to find its way through its crippling factionalism.

It was also considered possible that Mbeki was seeking pay-back for his humiliating ouster, bringing his voice to bear at the critical moment in the hope of decisively defeating the pro-Zuma faction in the party's top decision-making body.

With conflicting legal opinions to assess, the meeting is scheduled to continue into Tuesday.

Previous Story
Dealing With Ace - a Postponement Wrapped in a Delay Inside a Deferment of Possible Action, Maybe
Next Story
Ace Vs Cyril - Crumble in the Jungle

Dealing With Ace - a Postponement Wrapped in a Delay Inside a Deferment of Possible Action, Maybe

Ace Vs Cyril - Crumble in the Jungle