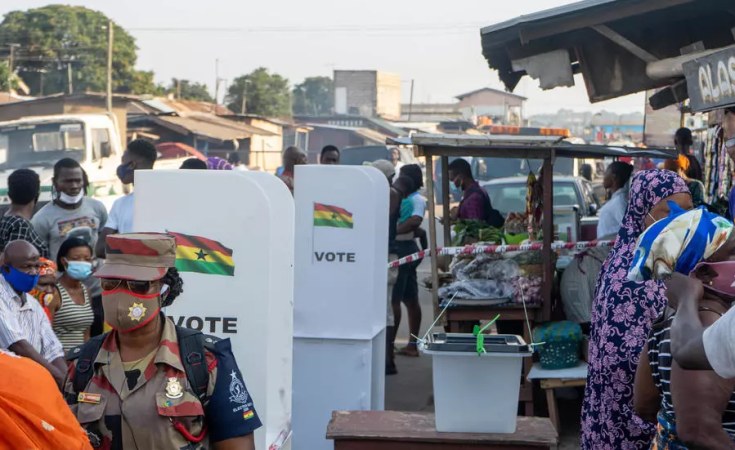 As of 6 a.m. Wednesday, the results in more than 250 constituencies have been announced and President Nana Akufo-Addo has maintained his narrow lead, polling 6,375,560, against former president John Mahama, who has 5,879,737

The electoral commission of Ghana early Wednesday apologised to citizens over its inability to declare the results of the presidential election at the 5 p.m. it earlier promised but assured that the collation process has been transparent, fair, and participatory.

Addressing the media at around 2 a.m., Eric Bossman, the deputy chairperson, corporate services at the commission, said they had received collated results from 14 regions and were working to finalise the remaining two.

Mr Bossman, however, said the results would be declared if they find that the outcome in the two regions, which have a combined total of 29 constituencies, will not affect the overall outcome of the election.

"As a commission, we will come back and revise the numbers once we have them available."

The commission further said in a statement that it had involved political party agents at all levels: at the polling station, constituency collation centres, and the national collation centre.

As of 6 a.m. Wednesday, the results in more than 250 constituencies have been announced and President Nana Akufo-Addo of the New Patriotic Party has maintained his narrow lead, polling 6,375,560, against his closest challenger and former president John Mahama, a candidate of the National Democratic Congress, who has 5,879,737.

At the end of collation, the candidate who secures over 50 per cent votes will be declared the winner.

The NPC has also won 132 parliamentary seats against the NDC's 125.

Earlier on Tuesday, both the ruling party and the opposition claimed victory at the polls.

The NDC addressed journalists Tuesday morning claiming it had won over 140 parliamentary seats.

Later in the evening, Mr Mahama followed up with another press conference thanking the electorate for giving the party a majority in parliament.

"140 seats is a majority and no attempt should be made to subvert that," Mr Mahama said.

"I have looked at the results collated so far, and I am excited because we won in 10 regions out of 16. And the Ghanaian people have expressed their confidence in us. We will resist any attempt to subvert the will of the people."

But the ruling NPP described the opposition's claims as naive, saying that there are overwhelming examples of regions, in the election, where the NPP lost the parliamentary election but won the presidential.

"I shudder to understand the standing of the NDC that still believe that the fact that if I won parliamentary I must necessarily win presidential," said John Boadu, the party's general secretary.

"At least, if for nothing at all, for starters, you are aware of what happened in 2008 when Nana Akufo-Addo won overwhelmingly the presidential election with a margin of close to 100,000 but lost the parliamentary. It was on that basis that the Ghanaian people decided to, in order not to have a hung parliament, decided to give it to the NDC. I think that is too glaring for even a neophyte in politics not to understand this.

"It is all part of a grand desperation we have seen with them right from the inception of this year's campaign. They didn't want this election to come on, they disrupted the new register, a register that has been proven beyond doubt that is has the most credible register and a register with integrity, they were stampeding it. So I'm not surprised that they are in this position."