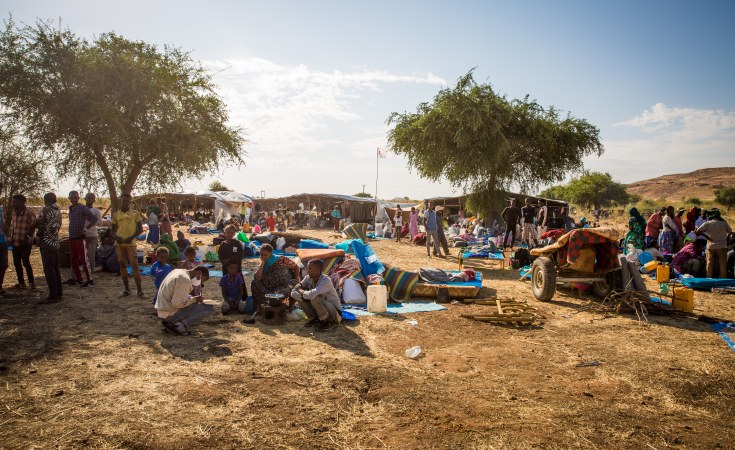 Ingebjørg Kårstad / Norwegian Refugee Council
New arrivals to Um Rakuba camp, which is 70 kilometres from the Ethiopian border inside eastern Sudan. It currently hosts some 10,000 Ethiopian refugees, who have fled fighting in Ethiopia’s Tigray region over the past month.
Deutsche Welle (Bonn)

The UN has called the situation in Tigray "worrying and volatile" amid reports of continued fighting in the region. The Ethiopian government has rejected appeals for outside groups to investigate the conflict.

UN High Commissioner for Human Rights Michelle Bachelet on Wednesday called the situation in Tigray "worrying and volatile" amid reports of continued fighting between federal and Tigrayan forces and the ethnic profiling of Tigrayans.

"There is an urgent need for independent monitoring of the human rights situation in the Tigray region, all necessary measures to protect civilians, and accountability for violations," she said.

Ethiopia's government, meanwhile, has insisted it "doesn't need a babysitter."

Redwan Hussein, spokesman for the Ethiopian government's task force in Tigray, told reporters Tuesday evening that Ethiopia would only invite outside groups to assist if it feels it has "failed to investigate."

"Ethiopia is being run by a strong functional government," he said. "It doesn't need a babysitter."

The remarks come after the Ethiopian government said it had shot at and detained UN staffers on Sunday, alleging that they were trying to break through checkpoints and reach an unauthorized area.

Ethiopia's military has been engaged in a month-long conflict with forces from the Tigray regional government. Thousands of people, including civilians, are believed to have been killed and at least one large-scale massacre has been documented by a human rights group.

Most communications links in Tigray have been shut down and access to the area is highly restricted, making reports difficult to verify.

"There are a few remnants of the militia or special forces not yet controlled ... kind of hooligans, outlaws," Redwan said.

The UN estimates nearly 1 million people have been displaced in the fighting, with most fleeing to neighboring Sudan.

With Tigray largely cut off from the outside world, many of its more than 5 million people are in desperate need of food and medicine. The UN and aid agencies are calling for better access to the region.

"Children, women and men in Tigray have now borne the brunt of this conflict for more than a month without any emergency assistance from outside the region," the Norwegian Refugee Council said. "These people can no longer be made to wait. Aid must not be left at a standstill."