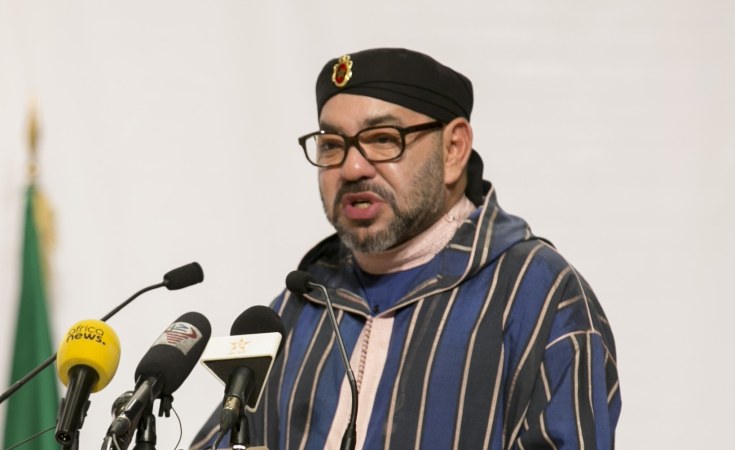 Paul Kagame/Flickr
HM King Mohammed VI of Morocco addresses the audience at the Heads of State and Government Summit of the Congo Basin Commission in 2018.
Deutsche Welle (Bonn)

Morocco will become the fourth Arab state to resume relations with Israel in the back-end of the Trump presidency — after the US granted a key concession on disputed territory. Israel's PM hailed a "joyous" development.

Moroccan King Mohammed VI on Thursday said his country would "resume official contacts... and diplomatic relations with minimal delay" with Israel, according to a statement from the royal palace.

Israeli Prime Minister Benjamin Netanyahu hailed the agreement as "historic," calling it "another great light of peace" in the region. Israel recently penned similar deals with the Sunni Arab states of the United Arab Emirates, Sudan and Bahrain.

"I've always believed that this historic day would come," Netanyahu said, before lighting a candle for the Jewish Festival of Lights, Hanukkah, which began Thursday.

Netanyahu and Mohammed VI both raised the prospect of resuming direct flights between the countries and the opening of diplomatic missions.

The normalization of ties between Arab states and Israel has been a feat long considered impossible due to the political impasse of the Israeli-Palestinian conflict.

Indeed, not all welcomed Thursday's announcement. Bassam as-Salhi, a member of the Palestine Liberation Organization's Executive Committee, condemned the pact.

"Any Arab retreat from the [2002] Arab peace initiative, which stipulates that normalization comes only after Israel ends its occupation of Palestinian and Arab lands, is unacceptable and increases Israel's belligerence and its denial of the Palestinian people's rights," Salhi told news agency Reuters.

US President Donald Trump was the first to announce on Thursday that Morocco and Israel had agreed to normalize relations, following a call with Moroccan King Mohammed VI.

"Another HISTORIC breakthrough today! Our two GREAT friends Israel and the Kingdom of Morocco have agreed to full diplomatic relations — a massive breakthrough for peace in the Middle East!" Trump tweeted.

President-elect Joe Biden, who is set to succeed Trump on January 20, will now face a dilemma over how to handle the freshly-inked deals on taking office.

While Biden is expected to at least change the tone of US foreign policy, quite how much more he will alter is very much up for debate. The Democrat has suggested he will continue the pursuit of what Trump calls "the Abraham Accords" between Israel and Arab and Muslim nations.

After initially announcing the deal between Morocco and Israel, Trump later tweeted: "Morocco recognized the United States in 1777. It is thus fitting we recognize their sovereignty over the Western Sahara."

The disputed region of Western Sahara is a former Spanish colony, mostly under Moroccan control, and it has also been claimed by an Algerian-backed independence movement. A representative of the Polisario Front independence movement for Western Sahara said it "regrets highly" the US decision although it found the move "strange but not surprising."

A United Nations spokesman responded that its position on the region was "unchanged."

The UN brokered a ceasefire in 1991 on the condition that an independence referendum be arranged in 1992. Morocco later blocked that vote and subsequent attempts to set up replacement polls. UN peacekeepers still monitor the fragile truce in the region.

U.S. Criticized for Backing Morocco Over W. Sahara Dispute
Tagged:
Copyright © 2020 Deutsche Welle. All rights reserved. Distributed by AllAfrica Global Media (allAfrica.com). To contact the copyright holder directly for corrections — or for permission to republish or make other authorized use of this material, click here.