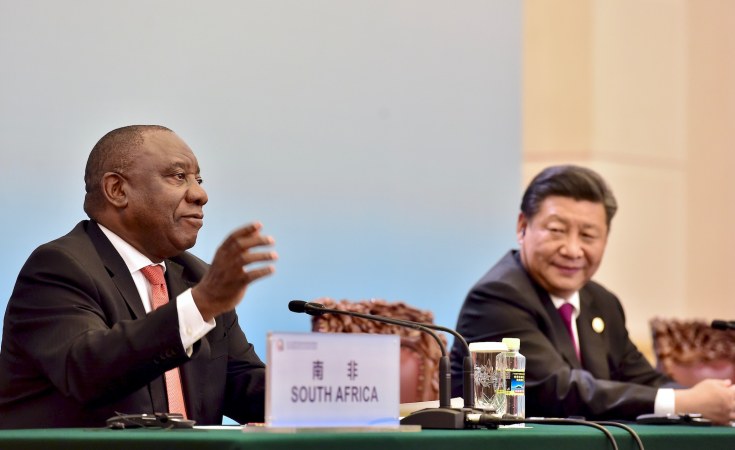 The health impact of the pandemic is still playing out in southern Africa, but the severity of economic disruption is clear with recession in most countries.

Africa is experiencing its first continent-wide recession in 25 years due to the impact of the COVID-19, but many southern African states were already in economic distress prior to the pandemic - with Angola, Mozambique, Zambia and Zimbabwe partly because of unsustainable debt burdens they owe to China.

The COVID-19 crisis propelled African debt - and repayment and forgiveness - to the top of the international agenda once again, although this time much of the debt is bilateral, non-concessionary, or commercial in origin.

In April, the World Bank's Development Committee and G20 finance ministers endorsed the Debt Service Suspension Initiative (DSSI) which includes 40 African Least Developed Countries (LDCs). This G20 initiative, backed also by the IMF and G7, does not provide any reduction in the net present value of debt, but it suspended repayment to no earlier than June 30, 2021.

Although the DSSI is not offering debt relief, only postponement, the G20 and the Paris Club of creditors have now endorsed a new common framework for debt relief, which aims to allow indebted poor nations to apply for debt relief - including write-offs - while ensuring all creditors negotiate on the same level playing field.

The Paris Club has also agreed to a Memorandum of Understanding supporting the DSSI principle, and is advising how these can be translated into revised lending agreements as well as trying to co-ordinate with non-Paris Club creditors such as China - but with mixed results.

There is no doubt the DSSI will provide significant savings to those participating in it, allowing these states to concentrate resources on fighting the pandemic if they so choose.

According to the IMF, nine states within the Southern African Development Community (SADC) will benefit, but not all SADC states are eligible for DSSI, either because they are not UN-recognized LDCs - Botswana, Eswatini, Seychelles, Mauritius, Namibia, and South Africa - or they have refused to accept LDC status - Zimbabwe.

Two SADC states currently have debt levels larger than the size of their economies - Angola and Mozambique - while four others are paying more than ten per cent of the value of their total debt in debt service payments - Mauritius, Angola, South Africa and Botswana.

Several owe the equivalent of more than one-third of their debt to private creditors - such as Mauritius and Zambia which both owe above 40 per cent. And three countries are classed as being in 'high risk' or 'debt distress' with Chinese lending to them already being significant - Mozambique, 18 per cent; Zambia, 26 per cent; and Zimbabwe, 25 per cent.

In 2019, Zambia's debt reached $11.2 billion, or 48 per cent of GDP, with the IMF predicting a rise to nearly 70 per cent of GDP by the end of 2020. And it has now become Africa's first pandemic-era sovereign default after failing to pay a $42.5 million Eurobond coupon. But Zambia's $3 billion in outstanding Eurobonds is not its only debt as it owes $3.5 billion in bilateral debt, $2.1 billion to multilaterals and $2.9 billion to other commercial lenders.

China is also exposed to significant Zambian debt with $3 billion owed by Lusaka to China and Chinese entities. The lion's share of this is the $2.6 billion owed to China's Exim Bank, which agreed to suspend interest and principal payments worth $110 million in 2020 in concert with the DSSI.

Zambia is also engaging in consultations with other 'private' Chinese lenders, although these negotiations seem to be spearheaded by China's ambassador to Lusaka. This has resulted in private Eurobond debt holders suggesting Zambia will prioritize Chinese debt repayment first.

China's debt diplomacy with Angola is illuminating about how Beijing is responding, given Angola is particularly strategic for Beijing for now as the fourth largest exporter of oil to China, making up 72 per cent of all Angola's oil exports, although this is likely to significantly decline over the next decade as China reduces its demand on fossil fuels.

With 34 per cent of all Chinese debt for all 72 LDCs being with Angola at $20.1 billion - and Pakistan at $16 billion - Angola's total government debt-to-GDP ratio is currently around 120 per cent and servicing it eats up $9 billion per year.

Half of all the debt service is to China and Chinese lenders, according to data from the central bank, accounting for 45 per cent of the nation's external debt. Of the $20.1 billion, about 75 per cent - $14.5 billion - is owed to the China Development Bank with $5 billion to the China Exim Bank. It has also borrowed from China's largest lender, ICBC.

However, Angola could potentially save $3.4 billion according to the IMF and the World Bank, which led to its president João Lourenço joining a group of 19 African and European leaders including Germany, France, Italy, Kenya, and South Africa in April to sign a document calling for a moratorium on debt and the granting of programmes of economic and health assistance due to the pandemic.

China's debt exposure to Angola - and Pakistan - was a prime reason why Beijing is not opposing the DSSI and, in fact, actively lobbied for Angola to be signed up to it, as well as why LDC status was accepted as the participation criteria, as the World Bank actually classifies Angola as a Lower Middle Income state.

Angola officially asked to be part of DSSI and engaged with key creditor countries on adjusting its debt financing facilities, but Angola's renegotiation over the terms of its oil-backed loan repayments to China - especially the duration of a payment moratorium - is opaque.

China lobbied hard for Angola to be part of the DSSI but has not provided details of the two countries' own bilateral negotiations which seem to have reached an agreement for a three-year moratorium on interest payment instalments.

China seems also to have wanted compensation in return for this, suggesting a long-term concession on the strategic Benguela railway or port facilities, but this was rejected by the Angola government which instead offered extra oil equity in offshore blocks. It remains unclear if this was of interest to Beijing and what the final arrangements are but, over the last month, there has been more foreign exchange liquidity in Angola and seems to have been a halt to some Angolan oil cargoes to China.

Angola's Chinese debt burden has resulted in the Lourenço administration moving closer to Beijing again, and the negotiations also demonstrate Beijing's official ambiguity over how to respond to the growing LDC debt owed, as the Angola situation shows China seeking maximum advantage through bilateral and often opaque negotiations.

Following a virtual meeting of G20 finance and central bank governors on 18 July, World Bank group president David Malpass stated: 'For DSSI to be fully effective, there should be a standard minimum set of debt-structuring information. This will avoid the secretive rescheduling that are underway in some countries, such as Angola and Laos, often with undisclosed grace periods and terms. This fragmentation disfavors other creditors and the people in the debtor country'.

At the Extraordinary China-Africa Summit on Solidarity against COVID-19 in June, Chinese president Xi Jinping said Chinese financial institutions should support the DSSI and consult African countries 'according to market principles to work out arrangements for commercial loans with sovereign guarantees'.

Five per cent of current Chinese lending to LDCs is interest-free and China already signalled its intention in 2020 to provide debt forgiveness to African countries with zero-interest loans under the existing Forum on China-Africa Cooperation (FOCAC) commitments.

China is also preparing for the next FOCAC summit scheduled for Dakar in 2021 and wants this to be a showcase about post-COVID-19 recovery and to show China is the preferred Africa partner.

Throughout southern Africa, Chinese diplomats are aggressively promoting Beijing's COVID-19 recovery response, talking up donations of medical equipment and that China has joined COVAX to supply vaccines and promising additional support and investment.

Despite the impact of such geopolitics worsening relations with Western countries, pressure is growing for China to engage more consistently with DSSI - especially by providing more disclosure about the terms of renegotiation of its loans in countries such as Angola and Zambia.

Africa's creditor landscape is changing with new entrants, such as China and private creditors, in addition to the more traditional multilateral and bilateral creditors. The COVID-19 crisis has shown why the current international debt architecture must be restructured - the DSSI and how it performs in southern Africa could be a step in the right direction.

This article draws from Afrika Süd - Dossier published in August 2020.

Tagged:
Copyright © 2020 Chatham House. All rights reserved. Distributed by AllAfrica Global Media (allAfrica.com). To contact the copyright holder directly for corrections — or for permission to republish or make other authorized use of this material, click here.