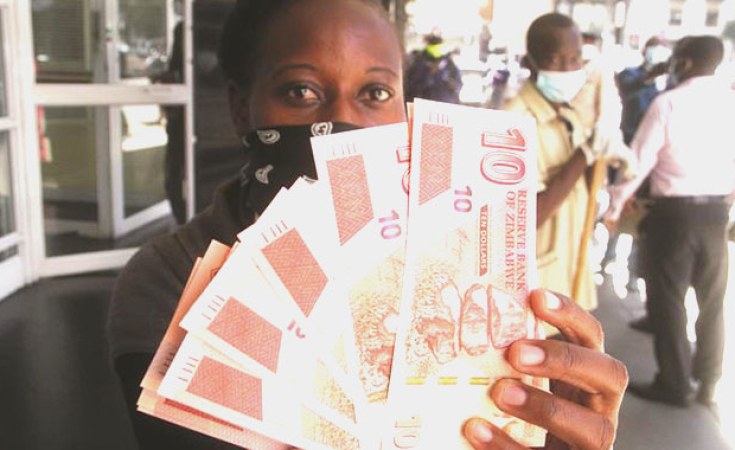 Kudakwashe Hunda/The Herald
A woman displays the new $10 banknotes on her way out of a bank in Harare.
263Chat (Harare)
By Kudzanai Gerede

Zimbabweans will face yet another gloomy festive holiday this year as price of basic goods continue to soar well beyond the reach of many at a time authorities predict that inflation will continue to scale up in the New Year.

Prices of food and beverages- key components of the year-end festivities, are increasing therefore dampening consumer power in the run-up to Christmas day, the consumer lobby body, Consumer Council of Zimbabwe (CCZ) says.

"I think consumer power is at its lowest ebb. We know when festive season comes people will try to get to mingle with friends and family but it is still very difficult. If you are to buy 10 kg of mealie-meal at ZWL$ 400 plus and you have a family of say five members it's really a tough call especially when you then consider the price of beef, pork and chicken it's going to be a tight Christmas," said CCZ executive director, Rosemary Siyachitema in an interview with 263Chat Business.

According to the consumer body, the low income urban earner's monthly basket for a family of six increased to ZWL$20 985 by end-September from ZWL$14 438 in August.

The monthly basket could be even higher for December given that month-on-month inflation for November reached 3.15 percent and year-on-year inflation stood at 401.66 percent, according to Zimbabwe National Statistics Agency (Zimstat) data.

"We understand there have been some wage increments lately but wage never catch up. People are cautious that after the festive season come January expenditures will also increase so there is a general awareness to that and consumers will shy from spending this Christmas," said Siyachitema.

A snap survey conducted by this publication revealed a rather melancholic festive season spending in most retail shops.

Retailers in particular, the small to medium sized clothing boutiques say there have not witnessed any surge in sales to reflect meaningful festive spending.

Perhaps it points to the fact that consumers are yet to recover from the COVID-19 pandemic, one clothing shop employee said in an interview.

"We are yet to witness a surge in sales this Christmas. Maybe it's because the lockdowns affected many livelihoods and they haven't recovered," she said.

Confederation of Zimbabwe Retailers president, Denford Mutashu was not available for comment at the time of publishing.

Yet some consumers are already preparing for an even bleaker January.

"I cannot afford to spend the little in have when I know January is around the corner. I have a daughter doing form two next year and I have just been informed that tuition fee will be US$ 130 for next term so tell me how can I enjoy Christmas with this?," said one Tekla Mukonori, a sales assistant at a food store in downtown Harare central business district.

Nevertheless, there are some sub-sectors in Zimbabwean society that seldom disappoint during the festive season such as the alcoholic beverages segment.

Some bottle stores have already put in place exciting promotions for the festive season with price of beer slashed at various discounts.

But whether imbibers will flock to quench their ever dry throats or not, it remains to be seen as Christmas draws closer but for now, a generally depressed Christmas shopping is sweeping across the country.