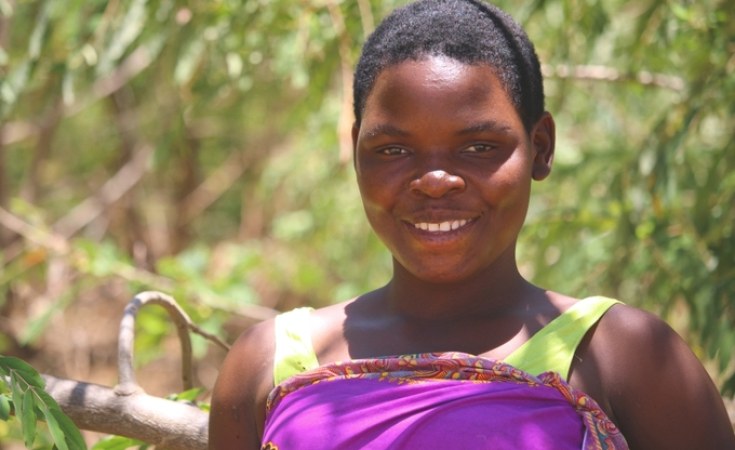 Luis Tato/UNFPA
Flora Francisco, a member of the Kachindamoto Youth Network, is one of the young people advocating for action on the climate crisis as well as championing sexual and reproductive health and rights, with support from UNFPA.
UNFPA East and Southern Africa (Johannesburg)

Dedza, Malawi — Just 85 kilometres south of Malawi's capital, the impact of global warming is abundantly clear. Hunger is becoming increasingly common due to famine caused by unfavourable rainfalls and poor harvests, thanks to changing weather patterns.

Adding to the problem is the mushrooming population of a nation that holds land as paramount, as it is the main source of livelihoods. In the past decade alone, the population has grown from 13 million to 18 million people. As land size per person has reduced, virgin land has been annexed.

In Dedza, trees have been cut down to make way for the new inhabitants, exposing the land to soil erosion. Almost 80 per cent of the district's land now lies bare and prone to degradation, making it unfavourable for cultivation.

The problem has not gone unnoticed by the young people who stand to inherit it. They have been galvanized to act.

"It is imperative that as young people we should be at the forefront to help save the planet from being uninhabitable, as the future belongs to us," says Charles Chingwalu.

In Senior Chief Kachindamoto's area in Dedza district, young people have formed the Kachindamoto Youth Network made up of 51 youth advocacy groups that aim to tackle the climate crisis as well as the unprecedented population boom. Mr. Chingwalu is the network chairman.

"We discuss how the population boom puts enormous pressure on resources such as land and the environment, as many people are forced to cut down trees as they look for new land to cultivate and feed their families," he says.

Because the network members understand how a population boom puts pressure on the environment and exacerbates the existing problem, they are taking a two-pronged approach - advocating for action on the climate crisis as well as championing sexual and reproductive health and rights, with support from UNFPA under the Safeguard Young People Programme.

Luis Tato/UNFPA
As the population rises in Dedza, trees have been cut down to make way for the new inhabitants, exposing the land to soil erosion. Most of the district’s land is now bare and unfavourable for cultivation, says Charles Chingwalu, chairman of the Kachindamoto Youth Network.

Network members share accurate information on climate change and they are taking action. In 2019 they planted almost 22,000 trees. This year, they have germinated 1,500 trees - a lower figure due to COVID-19-related movement restrictions - in readiness for the 2020-2021 rainy season.

They also share information on how access to sexual and reproductive health services, such as family planning, is essential to managing population growth trajectories to reduce the pressure that human beings exerts on the environment.

"We encourage each other, as young people, to access sexual and reproductive health services such as condoms and contraceptive methods to prevent teen pregnancy, as well as the spread of HIV and other sexually transmitted infections," says Mr. Chingwalu. Fighting child marriage and encouraging adolescents to focus on their education are critical elements of their campaign.

"With the right information on sexual and reproductive health issues, a lot of adolescent girls and boys appreciate the need to stay in school and not get married at an early age or have unplanned children," says Flora Francisco, a member of the Kachindamoto Youth Network.

As more young people gain access to the right information, the majority will make informed choices about their future - to complete their education, marry and bear children when they are ready, while also understanding how their actions have an impact on climate change, the network members believe.

"The more young people engage in early marriage and have unplanned children, the more we put pressure on our scarce resources," says Ms. Francisco.

Luis Tato/UNFPA
The extensive youth network fights child marriage and encourages adolescents to focus on their education, as critical elements of their campaign to reduce the burden that overpopulation places on land.

"Many parts of Mangochi district were submerged in water. We had to use the services of a helicopter to reach areas that were not accessible by road to provide sexual and reproductive health services, such as condoms, as a family planning method and for prevention of HIV and STIs, as well as peer education and HIV-related services," says Treazer Masauli, Senior Health Surveillance Assistant at Mangochi district hospital.

His health surveillance team discusses the dangers of teenage pregnancy, early marriage and the population boom with young people.

"Due to poverty, adolescent girls might be forced to get married but we advise them that getting married is not a solution, as they might face challenges not only while giving birth but also in terms of raising the child."

However, community members need a well-coordinated approach to fully understand the interlinkages around climate change and access to sexual and reproductive health and rights.

"To ensure that community members are reached with holistic and streamlined messages around climate change, sexual and reproductive health and rights, and agriculture, there is a need for development actors within the communities to work together and ensure good coordination," says Boyd Nkonjera, Senior Health Surveillance Assistant at Mangochi district hospital.

"At least many community members are aware of the dangers of a population boom, and can attest to how hard it is for them to acquire resources, such as land," he says.

Next Story
Tagged:
Copyright © 2020 UNFPA East and Southern Africa. All rights reserved. Distributed by AllAfrica Global Media (allAfrica.com). To contact the copyright holder directly for corrections — or for permission to republish or make other authorized use of this material, click here.