Nigeria: The Nigerian Govt Is Burying Its Atrocities By Attacking Free Press 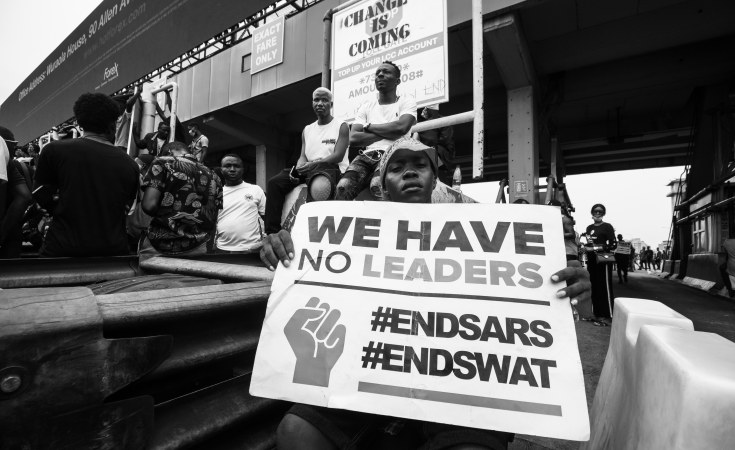 Nengi Nelson/Unsplash
We have no leaders. The situation in Nigeria with the police brutality is dire. Youths finally speak up and request the change they speak by situating their bodies in public spaces.
African Arguments
analysis By Adewumi Emoruwa

The press has remained resilient during the #EndSARS protests, but these hostilities have to end for the sake of the country's democracy.

For two weeks in October 2020, young Nigerians exercised their constitutional right and embarked on the historic #ENDSARS protests against police brutality. As the demonstrations intensified, the government responded by proclaiming a hasty curfew and sending the military to enforce it, leading to the deaths of at least 12 peaceful protesters.

The world paid attention and global condemnation was swift. To cover its actions and instead of responding to protesters' demands, the Nigerian government chose their de facto strategy of forceful compliance and suppression of the press.

Regulators compelled traditional broadcast media to ignore protest coverage, with those like Arise TV that defied the orders punished with exorbitant fines. Pelumi Onifade, a 20-year-old journalist covering an attempted robbery incident, was shot, taken away in a police van and eventually killed. The Corporate Affairs Commission attempted to deregister the human rights organisation Enough is Enough due to the co-founder's links with the protests. Twenty accounts affiliated with the #ENDSARS protests were frozen, of which my company Gatefield's was one. The account was created to provide aid to independent journalists and media outlets reporting the protests and documenting the stories of victims of police brutality. The Central Bank justified their actions under the guise of investigating terrorist financing and money laundering acts.

Through a combination of regulatory sanctions, weaponisation of the Cybercrime Act, and harmful legislative proposals, the government has created an air of hostility towards journalists. But for all their force, they could not beat the power of social media. All over the world, Nigerians organised via platforms like Twitter and Instagram to document, raise money and spread awareness. In addition, young digital media organisations like Stears, People's Gazette and The Republic provided quality press coverage. On 20 October, Nigerian performance artist Obianuju Catherine Udeh, popularly known as DJ Switch, live-streamed the killing of peaceful protesters by the Nigerian military at the Lekki toll gate.

However, it is clearer than ever that the Nigerian government is systematically trying to diminish and evade responsibilities for its atrocities. None of this is new.

Under the current administration headed by former dictator Muhammad Buhari, Nigeria has become one of West Africa's most dangerous and difficult places for journalists. Jones Abiri, an independent journalist was imprisoned on the pretext of terrorism for two years for exercising free speech.

As Nigerians push back against these restrictions and disseminate information through creative means, the global community needs to rally too. The EU and incoming US administration need to contribute more than words in condemnation. There are some flashes of progress. The UK parliament has voted in favour of sanctions against Nigerian officials over their brutal response to peaceful protesters. But at the same time, the current US administration's proposed cuts to democracy assistance would severely hinder the work of Nigerian organisations promoting democracy and freedoms even though investments in security and economic development may increase.

What good is economic development where there is no freedom? It is time to curtail these hostilities.

The Nigerian press has displayed remarkable resilience throughout the country's history, helping to uphold democracy and promote critical discourse and free speech. If this last guard is left to break, Nigeria's fragile democracy may be permanently compromised.

Adewunmi Emoruwa is the Lead Strategist at Gatefield, a public strategy firm and initiator of the People Journalism Prize for Africa.