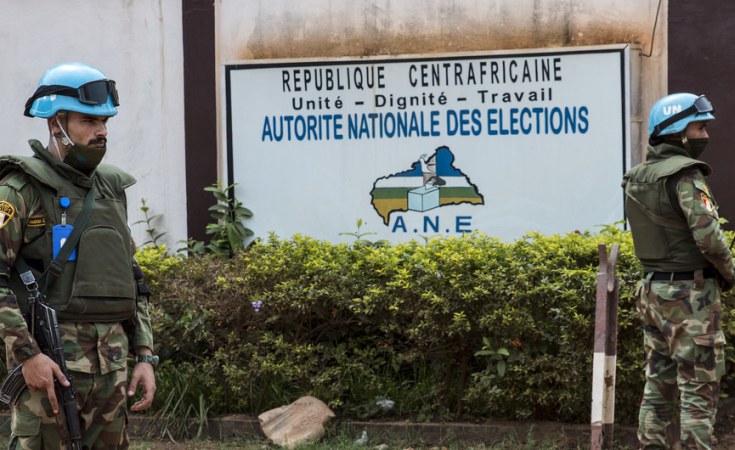 Francis Yanbedji/MINUSCA
MINUSCA peacekeepers securing the Headquarters of the National Elections Authority, the Central African institution in charge of the organisation of the 2020-2021 elections.
Deutsche Welle (Bonn)

Rebel militants have threatened to attack the capital of the Central African Republic ahead of the December 27 presidential and legislative elections. The government claims ex-leader Francois Bozize is plotting a coup.

The government of the Central African Republic said Saturday that the country's former president, Francois Bozize, is planning a coup in the lead-up to the December 27 presidential and legislative elections.

The government, which has little control outside of the capital, Bangui, said Bozize was intending on marching on the capital with his men. Bozize was banned by the country's top court from running in the upcoming election.

At the same time, the leaders of the three main rebel groups which control large swaths of the country announced an alliance on Saturday.

UN Secretary-General Antonio Guterres has called on all sides to work together and ensure credible elections. UN peacekeeping forces have also been deployed following recent outbreaks of violence.

Fear of destabilization and fraud

Bozize, 74, came to power in 2013 following a coup and was later ousted in 2013 after a different group of fighters took control of the capital.

The court rejected the former president's request to run in the election citing the international arrest warrant filed by the Central African Republic for charges of murder, arbitrary arrest and torture.

Bozize was said to have accepted the decision. However, the government in Bangui has claimed he is trying to "destabilize the country."

"This is clearly an attempted coup d'etat that the government denounces during this electoral period," said government spokesman Ange Maxime-Kaagui.

For their part, the opposition was concerned about possible large-scale fraud in the electoral process.

The UN mission in the country, MINUSCA, has deployed troops to disperse rebel militants who had taken control of roads leading to the capital.

The rebel groups that hold sway in much of the country have decided "to combine all of our movements into a single entity, called the Coalition of Patriots for Change or CPC, under a unified command," they said in a statement.

Militant groups have been prevalent in the country since the overthrow of Bozize and have often carried out ethnic violence after groups from the country's Muslim minority took over major cities.

Reprisals by Christian militant groups plunged the country into a years-long civil war.

UN peacekeeping forces, as well as French military forces, were deployed to the country in 2014. France pulled out of its former colony after setting the stage for the 2016 presidential election which were won by the current president, Faustin-Archange Touadera.