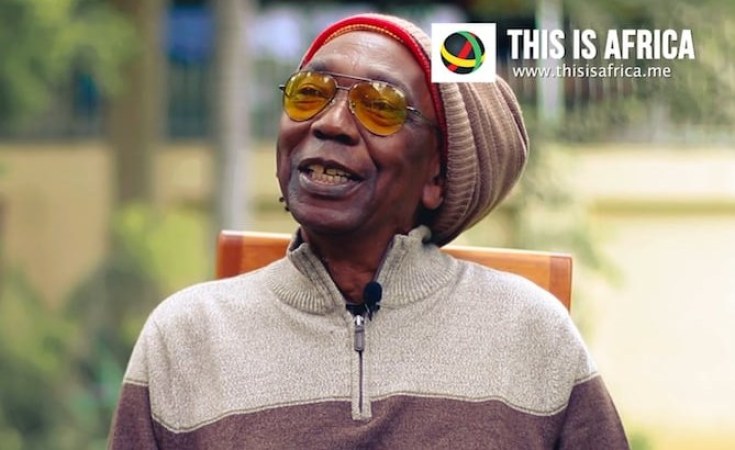 This is Africa
Thomas “Mukanya” Mapfumo, influential Zimbabwean Chimurenga musician and songwriter.
This is Africa (Hilversum)
By Onai Stanely Mushava

Zimbabwean music maestro Thomas Mapfumo channeled his revolutionary rasp and talked tough about Africa at the third edition of African Crossroads. The Chimurenga music legend was the headline performer and guest of honour at the event which was screened from seven hubs on December 10 and 11. His prerecorded set included liberation-era songs while his interview ranged from decolonial sonics and African unity to clueless leaders and new-school protest artists.

Africa can only survive as one unit because foreigners are currently coming to Africa with vested interests to get a piece of the continent's vast resources, Mapfumo noted, adding that regional intergovernmental bodies did not quite capture the dream of one Africa. The intergovernmental organisations such as the Southern African Development Community (SADC) seek among others to achieve economic development, enhance peace and security, stimulate growth, alleviate poverty, enhance the standard and quality of life of the people of the region. However, critics such as Mapfumo have pointed out the evident failures of regional bodies and the continental organisation in meeting expectations of African people. "I don't see any use of these small groups like SADC, the African Union and things like that," he said. "Africa is a divided continent. They are not thinking right, and they are not moving in the right direction."

The Lion of Zimbabwe is not new to speaking his mind on matters Pan-African and speaking truth to power. Some of the biggest hits, "Africa", "Vanhu Vatema", "Zimbabwe-Mozambique" and "Tongosienda" urge bonds of solidarity on the continent. Economically themed "Vanhu Vatema" is as relevant than ever as African countries continue to record inordinate trade deficits, rank poorly on resource wealth despite being among the most naturally endowed, and fail to account for mineral and oil resources with better living standards for citizens. "Tongosienda", strongly worded against Apartheid and insurgency, has been overtaken by xenophobia, Afrophobia, homophobia, terrorism and state violence.

Drawing inspiration and moving towards a youth-driven Pan-African dream

Mapfumo is attuned to the aspirations of the youths and remains an engaged, conscientious and inspirational voice from exile. While his early message was tied to state policy, revolutionary parties and the regional bodies they control represent a state-led Pan-Africanism that is often seen as the brotherhood of the elites against the citizens. Music and youth-driven people power movements are creating new, organic space for the Pan-African dream. During the interview, conducted by John Mambira and screened in the Sound Exhibition segment of Africa Crossroads, Mapfumo urged young artists to be led by their own courage and conscience.

"Every one of us was born a politician," said Mapfumo, widely regarded as a role model for protest artists. "When you see wrong things being done by the leaderships, you are supposed to point at those things and say this is wrong... 'Emancipate yourself from mental slavery'... You must be someone who can speak up, someone who is not afraid, someone who is able to point injustices and say this not good. You must always stand with the people because people are the power," said the Chimurenga legend.

Mapfumo's December 11 performance coincided with the reissue of Take One, his genre-defining first group Hallelujah Chicken Run Band's retrospective compilation. He revisited this phase in an interview with Mambira, retelling the story of how he became the influential folk-rock innovator. As a young member of a rock band, Mapfumo was immersed in Elvis Presley, Frank Sinatra, Rolling Stones, the Beatles and others. During a Texan Rock Band Contest, Mapfumo's band had to endure the taunts of a Rhodesian racist: "Shut up you, kaffirs! Shut up you, kaffirs!" as they played the Rolling Stones' "Last Time."

"Then this young man called Passmore was from Zambia - Zambia was already independent. He was offended so he jumped at the white man and grabbed his neck. He had to be unfastened by the police," Mapfumo recalled. "That incident pained me - I don't want to lie. I started thinking, don't we have our own music identity as blacks? These people are now telling us not to sing in their languages. That is how I conceived Chimurenga music. I told myself that I had to find myself."

Mukanya yodeled and growled his struggle message for more than an hour at Africa Crossroads, drawing his set from 1970s and 1980s, the first two decades of his mbira-driven canon. His Blacks Unlimited band was a symbolic mix of long-time pillars and youthful energy, featuring lead guitarist Gilbert Zvamaida, Christopher Muchabaiwa on bass, Lancelot Mapfumo playing congas, with John Hambira on drums, backing vocalist and dancer Ratidzo Dangarembga, mbira player Eric Miller, and others.

His one-hour set, "Shumba", "Ngoma Yekwedu", "Munhu Mutema", "Nyoka Musango", "Tozvireva Kupiko", "Chirizevha Chapera", "Bhutsu Mutandarika" and other songs, drew from his high-octane early years. Musical longevity is usually marked by vocal phases, smooth to deep to hoarse, but a key Chimurenga trick has enabled 75-year old Mapfumo to avoid this. Even as a young revivalist, back in the early 1970s, Mapfumo already personified sekuru, the elder connoisseur of tradition, expressing his folksy repertoire in a gravelly voice. As he ages, nature is blending into initiative.

Mapfumo's revivalist legacy is best captured by Mokoomba, Nobuntu and Jah Prayzah, young Zimbabwean artists who have made international inroads by foregrounding their respective Tonga, Ndebele and Shona identities. "Thinking about where you are coming from is very important. If people hear that you are Zimbabwean, they will expect you to sing the Zimbabwean way. That's cultural exchange. We were accepted in America we brought our own music. All the big names in Africa, Salif Keita, Kela Kuti, Franco of Congo did not succeed from playing other countries' music," he said.

His position on Zimdancehall, a genre he has previously called bubblegum although it has since risen to be the biggest in the country, is still uncompromising. "Actually these kids, they are destroying our culture because Zimdancehall doesn't belong to Zimbabwe; that's Jamaican style of music," he said. "Why should we adopt Jamaican culture. We are Zimbabweans. We got our own music. We promote our own culture rather than promoting Jamaican culture."

Zimdancehall, in fact, best represents the protest side of Mapfumo's legacy in the current setting. The foremost dancehall artists of the past decade did a lot to Zimbabweanise the borrowed genre by blending home influences and heavy local language use. On the other hand, the breakout stars of 2020, Poptain and Nutty O, are good examples of artists who have heeded Mapfumo's advice of doing it in English or patois to compete internationally. Winky D released a culturally themed 2019 album. Winky D, whom Mapfumo previously criticised, before warming up to recently received a regional award and is widely regarded as one of the best dancehall artists in Africa.

Mapfumo's performance at Africa Crossroads shows that he is far from done, despite announcing retirement earlier this year. Music remains his running meditation. "Even the drop of a spoon, that sound I can change it into music," he said, revealing that he has recorded more than a 100 tunes on his phone for his band to catch up with.

This article is written as part of a collection commissioned in partnership with African Crossroads under the theme "Re-imagining the pan-African dream -- reflecting on the past, experiencing the present and imagining the future". The contents of the series are the sole responsibility of This Is Africa Trust, and cannot be regarded as reflecting the official position of Hivos Foundation.