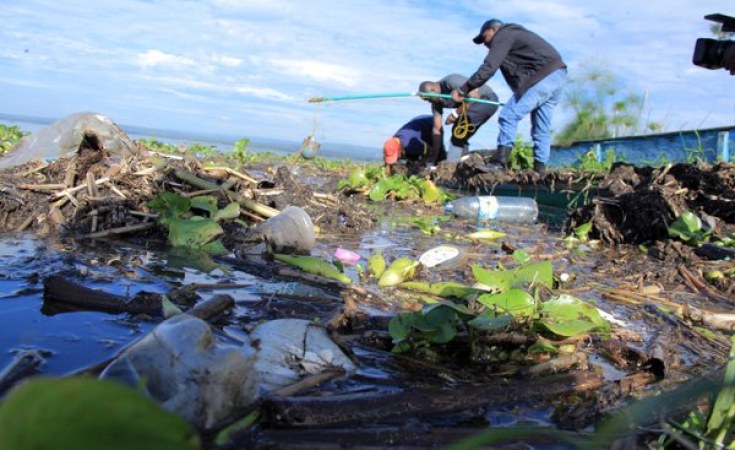 Kenya has been a beacon for global efforts to reduce plastics. The country’s 2017 plastic bag ban reduced environmental degradation that comes from plastic waste and demonstrated decisive government action against plastic pollution. Now, Kenya finds itself again in the spotlight as the primary line of defense to protect Africans from an unprecedented explosion of toxic plastic waste across the continent. New research exposing that toxic chemicals from plastics are poisoning Africa’s food chain, covered in The East African, should strengthen governmental resolve to protect the collective health of Kenyans and all Africans.

In 2020, Kenya joined 183 other countries in giving developing countries a simple tool to resist the dumping of waste from the global north. Kenya signed the sensible Basel Convention Plastic Waste Amendment , which requires importers to declare the contents of their shipments and secure prior informed contest from importing countries before shipping plastic waste.

Governments and advocates have joined forces and worked to repatriate unwanted waste from the Philippines , Indonesia , Malaysia , and Thailand .  Interpol documented a dramatic upswing in criminal plastic waste dumping, further underscoring that plastic waste is a burden that no one wants.

Yet despite the growing global movement against plastic pollution, the chemical industry is moving to create MORE plastics, aiming to triple the supply by 2030 . Why? Over 99% of plastic is made from chemicals sourced from oil and gas. As prices drop for fossil fuel energy, the industry is increasing plastic production.  Skyrocketing plastic production means an even larger colossus of plastic waste, waste that is riven with toxic chemicals that are hazardous to human health and the environment.

What will the world do with its unwanted mountains of toxic plastic waste?

Kenya is the target of a scheme by the America Chemistry Council, the lobbying arm of the chemical industry that represents the world’s biggest fossil fuel and chemical companies, to be made the new global destination for plastic and plastic waste.  A letter from the American Chemistry Council to US trade negotiators exposes that the industry is working hard to influence US trade policy with Kenya that will result in a surge of plastic and chemical waste dumping in Kenya and throughout Africa.

New research demonstrates that plastics contain hazardous chemicals that lead to toxic exposures. An important report from UN chemicals conventions and chemical experts demonstrates that toxic chemical additives are widespread in plastics creating dangerous contamination at every stage of production, use, disposal (including landfill, incineration, open dumping), and recycling of plastic. The report reveals that “chemicals of concern” are omnipresent in children’s toys, food packaging, textiles, and electronics.

The plastic industry continues to deny the dangers intrinsic to their products and insists their products are safe. But new research has upended that claim. Cancers, birth defects, immune system suppression, impaired intellectual function, developmental delays, are some of the health impacts associated with exposures to the known chemicals in plastics.

Moreover, research shows that there are no safe methods to dispose of plastics that do not create toxic exposures.

Recycling is more of a myth than a solution. Only a fraction of all the world’s plastic waste has been recycled — 9% to be exact — because most plastics are not recyclable. The industry argues that it will make more plastic that can be recycled. But recycling plastics with toxic chemicals cause further toxic exposures. Some toxic additives in plastics are so dangerous they have been banned, yet research demonstrates they are still recycled and re-circulated in children's toys . A peer-reviewed study from July proved, for example, that children’s toys made from black recycled plastics, which are sourced primarily from e-waste, are toxic to human cells.

What happens to the staggering amounts of plastic waste that does not go into the recycling stream? It ends up in landfills that can leach toxic plastic additives into surrounding soils and groundwater, in incinerators that release toxic chemicals in the air and produce massive amounts of highly toxic dioxin laden ash ; or into the environment through open lots, canyons, waterways, and oceans .

Chemicals in plastics and e-waste can poison local food chains

Recent studies conducted in Ghana, Indonesia, and new data from Tanzania and Kenya, reveal shocking evidence of the hidden hazards of plastic waste. Free-range chicken eggs sampled in communities where plastic waste and e-waste are dumped in Ghana and Indonesia were found to contain dangerously high levels of dioxin and flame retardants. The eggs in Ghana had over 200 times the European Food Standard limit for dioxin. Some of the eggs sampled in Indonesia contained levels of dioxin that were comparable to sites contaminated by Agent Orange in Vietnam.

Significant levels of very hazardous chemicals, many of which are globally regulated under the UN Stockholm Convention, were measured in free-range chicken eggs sampled from the community around the municipal waste dump of Pugu Kinyamwezi in Tanzania, including dioxins, the industrial chemical SCCPs, and globally banned PCBs. In Nairobi, sampling near a school that uses plastic waste to fuel a community cooker, found high levels of dioxin, at five times the daily EU tolerable limit, and high levels of the globally banned flame retardant HCBD in the eggs.

These dramatic findings should set off alarm bells for Kenya’s policymakers.

In addition, governments must be wary of the plastics industry’s claims that “waste to energy” incinerators are an environmentally friendly solution to eliminate waste while simultaneously creating energy.  Dow Chemical, for example, has gone so far as to re-caste plastic waste incineration, a process that creates massive amounts of some of the most toxic substances on the planet as well as greenhouse gases, as a green energy source with a campaign to brand plastic trash bags as energy bags . Research demonstrates that incinerator technologies do not eliminate waste but leave large amounts of highly toxic residual ash that become a dangerous source of contamination and dashes hopes for a clean circular economy.

It is widely agreed that countries creating nuclear waste are “ethically and legally” responsible for managing that radioactive waste. The harms are so well understood, that virtually no one would argue that developing countries should accept shipments of hazardous nuclear waste. It is time to establish similar global safeguards acknowledging that plastic waste is hazardous waste .

As long as plastics are toxic, any circular economy can only be a toxic economy. We hope that Kenya will continue to be a world leader for health and the environment and hold the line against the incursion of toxic plastics in Africa.

Griffins Ochieng is the Director of CEJAD, Kenya, and a Steering Committee member of IPEN (International Pollutants Elimination Network). Yuyun Ismawati is a winner of the Goldman Environmental Prize, a co-founder of Nexus3 Foundation, Indonesia, and an Advisor to IPEN.