Central African Republic: 'We Must Fight for a Credible Election' 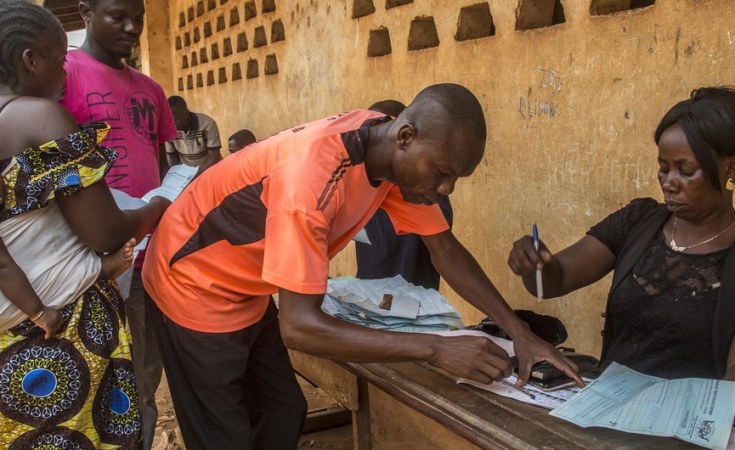 Despite threats against voting offices and polling places, the Central African Republic's election authority has said Sunday's vote will go ahead. DW spoke with Mankeur Ndiaye, the UN's special envoy for CAR.

Despite a series of attacks in the run-up to the Central African Republic's presidential and legislative elections -- the first since a fragile peace deal was reached between the government and rebels in February 2019 -- as well as threats against the centers where voter cards are distributed, the possibility of assaults on polling places and the killings of three UN peacekeepers on Saturday, the national elections authority, ANE, has reported that the vote will go on.

Francois Bozize, president of the Central African Republic from 2003 to 2013 and a participant in two previous attempted coups d'etat, returned from exile in 2019 to run for his old job. In December, just three weeks ahead of the election, Bozize was barred by the Constitutional Court from running again. The court ruled that he had failed to meet the "good morality" requirement for candidates because of an international warrant for his arrest and UN sanctions on charges of assassination and torture. He has since been accused of plotting a new coup.

Ahead of Sunday's election, DW spoke with Mankeur Ndiaye, the UN's special representative for the Central African Republic.

DW: What is the security situation ahead of Sunday's election?

Mankeur Ndiaye: Overall, I can say that the situation is under the control of the [UN] Blue Helmets, together with the Central African armed forces and the Central African domestic security forces, such as gendarmes and police. We are on the scene to react to any attacks or strategies of harassment by certain armed groups in alliance with Francois Bozize, the goal of which is to obstruct the election process by preventing Central African citizens from receiving their voting cards and going to polling places on December 27. We face attacks every day, but our response has been overwhelming.

It has been reported that 11% of the voter card distribution centers could not open because of the security situation. As a result, many voters still have not been able to pick up their cards. With this in mind, do you believe the election will be valid?

But, when we add everything up, 87% of the distribution centers are working as of today. Eight-seven percent -- that is noteworthy. And we are working so that the other four centers are able to get up and running, as well. The distribution of cards has been extended through election day. Any Central African who has not been able to pick up their card yet can get their card on Saturday or Sunday, election day, and then go vote.

The fear that armed groups will try to stir up tensions on voting day is widespread. In this context, why not encourage the government to postpone the election until the security situation is improved and citizens are able to vote in peace?

I understand your question, and I understand the concerns of people who are threatened. However, at the same time, they are also victims of rumors. I understand their concerns. But there is no indication that the security conditions will be better in two or three months than they are today. Those who do not want people to vote will create the same situation in three months so that once again there will be no vote. And they will create the same situation in six months.

Bozize cannot accept that his candidacy was not permitted. As long as he cannot run, he has threatened that there will be no election. Because of the court's decision, he will also not be a candidate in six months. It would be exactly the same if the election were postponed for three months or six months. The armed groups would use the same strategies. Nothing would be different.

We will do everything so that the election can take place. We know that there is insecurity in some parts of the country. However, we are in a country that has been in conflict for years. Still, we must also acknowledge that when today's situation is compared with the situation from two years ago, things are better. Today, it is troublemakers such as Bozize who want to sabotage the elections process, because he is not permitted to be elected. They foment fear in the population. To postpone the election would mean, however, to give up on it. And we cannot give up.

We must fight for a credible election. And that means that as many Central Africans as possible must vote on Sunday. We continue to work toward that. Our position is completely clear: There must be an election on December 27.

This interview has been adapted from French.