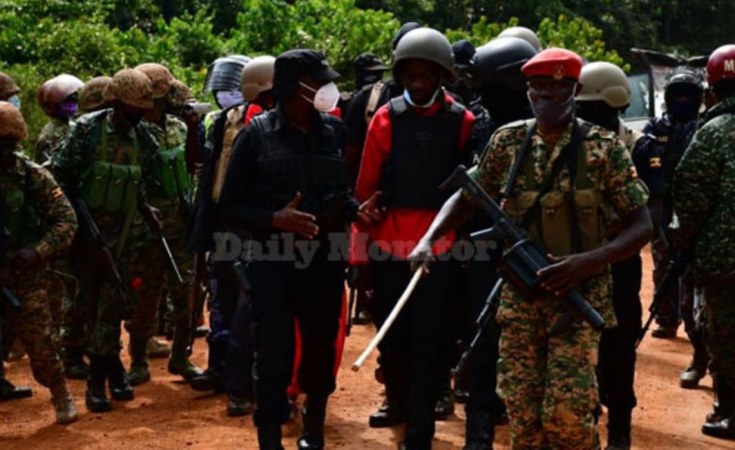 https://www.monitor.co.ug
NUP presidential candidate Robert Kyagulanyi aka Bobi Wine being led to a waiting army chopper in Kalangala town, December 30, 2020. Police say they intended to escort him to his home in Magere, Wakiso district.
The Monitor (Kampala)
By David Vosh Ajuna

Police say they have “restrained” National Unity Platform (NUP) presidential candidate Robert Kyagulanyi, aka Bobi Wine for continuously holding massive rallies on Kalangala island amidst the increased threats of coronavirus, in total disregard of the Electoral Commission and Ministry of health guidelines.
Earlier on, a tweet on Bobi Wine’s Twitter timeline said, “Bobi Wine and his entire campaign team arrested in Kalangala! Media blocked. – Admin.” Pictures and videos showed Bobi Wine and supporters of NUP being led away by Police.

However, police spokesperson, Fred Enanga said he's being transferred to his home in Magere, Wakiso district.
“Part of his advance team, captured on Cctv cameras and several video footages, while deflating tyres of police motor vehicles , inciting violence, obstructing police officers on duty, violating the health and safety protocols and various traffic offences, have been arrested for further statement recording,” it further stated.

Bobi Wine had travelled to Kalangala Islands for his electoral campaign visit to the area. Earlier in the day, Police paddy wagons were seen being loaded onto the MV Ssese headed for areas around Kalangala. Reports coming through state that he is to be airlifted from the island.

Bobi Wine’s arrest comes barely 15 days from January 14, 2021, the day when voters go to the poll to vote for who will be Uganda’s next President.

The election pits Bobi Wine and nine other opposition candidates against ruling National Resistance Movement (NRM) presidential candidate and incumbent president Yoweri Kaguta Museveni who has been in power for close to four decades.

On November 18, Bobi Wine was arrested in Luuka District, sparking a wave of protests in several parts of the country. Police at that time accused him of having more than 200 supporters recommended by the EC to contain further spread of Covid-19.
Official figures from authorities showed that over 58 people died during the November 18/19 protests that ushered the country into a violent start to its electoral period.