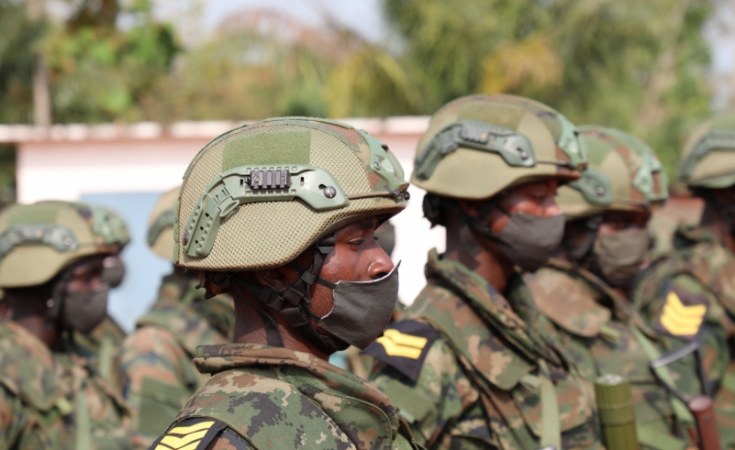 A brawny officer was busy briefing a dozen armed-to-the-teeth troops carrying backpacks when The New Times on Saturday, January 2, visited a Rwanda Defence Force (RDF) special forces' base in Bimbo, a locality in the Ombella-M'poko prefecture of the Central African Republic.

The military base is located 12 kilometers southwest of the capital, Bangui. All around, inside the compound, soldiers were busy in other activities.

Moments later, a young-looking soldier with a solemn demeanor welcomed this reporter with a smile. But he was unsmiling whilst explaining that taking pictures is restricted, in most zones of the compound. The sweat on his forehead, early that morning, due to the near oppressive CAR heat did not seem to bother him.

The troops in Bimbo are not part of Rwanda's larger peacekeeping contingent serving under the United Nations Multidimensional Integrated Stabilization Mission in the Central African Republic (MINUSCA).

They are part of the "force protection troops" - trained to conduct special operations - that Kigali deployed to the country on December 20, 2020, under a bilateral agreement on defense.

Their deployment also came after the targeting of the Rwandan contingent under the UN peacekeeping mission by militia factions supported by former CAR leader François Bozize, 74, who is now leading a coalition of rebels fermenting trouble in the country.

Ever since they set foot on the ground, these special forces contributed to ensuring that peaceful and secure elections were held on December 27. Initial election results are expected on January 4.

Besides Bimbo, these forces are now deployed in different locations around the country. And they are very mobile.

In addition, from the look of things, the soldiers in Bimbo and elsewhere are well equipped and ready for anything.

They have, among others, boosted the CAR armed forces - Forces armées centrafricaines (FACA) - and helped protect the capital city, which is now a beehive of activity as residents move around unperturbed. The protection of civilians in Bangui and those in IDP camps, among others, is high on their agenda.

Besides securing the recent poll and the capital, they deployed in Damara, a town located about an hour from the national capital, Bangui, in the prefecture of Ombella-M'Poko. Their assignment in Damara includes securing President Faustin Archange Touadéra's rural home.

When rebels struck at Burundian peacekeepers' and CAR troops in Dekoa, central Kemo prefecture, in the morning of December 25, 2020, the special forces - who were then heading north, from Sibut - swung into action. They quickly moved in, outgunned and repulsed the assailants.

The special forces were not able to save the lives of three Burundian peacekeepers already shot and killed, and a few others injured. But they saved the entire Burundian unit from annihilation.

They recovered a lorry earlier captured by rebels as well as the bodies of the fallen Burundians. Three rebels were killed and scores were wounded in the quickfire exchange before they fled.

After securing Dekoa, the special forces escorted the UN peacekeepers back to their base in Dekoa and continued their northern journey by road to Batangafo, through Kaga-Bandoro, a market town in the Nana-Grébizi prefecture.

They later established a defence outpost at Batangafo aimed at thwarting any other rebel activity in the area.

Rebels have not caused trouble in the area ever since the troops got there.

Besides the special forces, Rwanda is one of the largest troop contributors to MINUSCA, since 2014. And, Lt Gen Daniel Sidiki Traoré, Force Commander of the UN Mission on December 31, 2020, told reporters that he is proud of Rwandan units.

Rebels Reportedly Use Children in Reign of Terror