Africa: The Western Gaze - Why Should the West Validate African Realities? 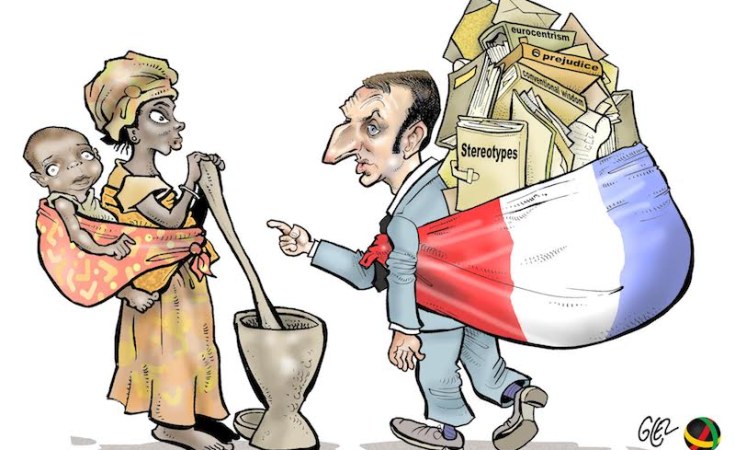 Damien Glez/ThisIsAfrica
This is Africa (Hilversum)
By Socrates Mbamalu

Africa, since the colonial period has always gazed to the West, with Western countries assuming the saviour role, an attitude, approach and mentality that has refused to be shaken off. Unsurprisingly, traditional postcolonial reports or accounts on the relationship between Africa and the West from the perspective of Westerners confirm that the West has always imagined itself as superior to Africa. When African countries began to claim and win their independence in the late 1950s and 1960s, when the Union Jack and other colonial flags were lowered, neocolonisation was sealed by the various flags that went up, and the national anthems sang. What did it mean to various people and ethnic groups across these individual African countries to be brought under these foreign concepts of church, flag, nation state, government, parliament, and army? From independence, the systems that we adopted and inherited without question gazed to the West, and venerated all things Western. Thus, through the Western lens, we judged everything else we did, our own cultures, languages, identities, traditional customs, religion, history, art, heroes and heroines. It is apt to invoke Chinua Achebe's proverb in Things Fall Apart: "Those who do not know where the rain began to beat them cannot say where they dried their bodies." We need to acknowledge where the rains began to beat us if we are to confront a myriad of biases about our continent and our people. Part of the problem why many of the Western biases and negative attitudes about Africa continue to find a place in the mainstream media and public discourse is because continue looking to the West for affirmation. We haven't created and revived our own African institutions and acknowledged the ones our forefathers created. Rather, we have continued to turn to the institutions of the West for validation in many aspects of society including the arts, politics, sciences, literature, music, and even film.

There are interesting and important questions which can be raised in the conversation on the relationship between Africa and the West. Why are Africans always judged based on Western standards, rules and norms and why do Africans themselves continue to judge themselves using the Western benchmarks? Musical awards like the Grammy in America, even though prestigious in its own way, have a different category for African musicians. For African artists, receiving such validation and recognition carries with it much prestige, a feeling that I have arrived.

Several questions arise; are Africans incapable of building their own institutions which they can grow to match global standards? Why should Africans seek validation from the West and why is such validation important? Why do we wait year in and year out for iconic Kenyan author Ngũgĩ wa Thiong'o to be awarded the Nobel Prize for Literature? Does this speak to our collective colonial mentality or it speaks to something much deeper, not being able to create robust institutions that can last decades without failing? Ngũgĩ has been tipped to win the prestigious prize since 2010. Over the years, there have been calls by many Africans to acknowledge Thiongo's major contribution to literature by awarding him the Nobel Prize in Literature but others argue that it is not essential. In an interview with the Financial Times in 2016 Ngũgĩ himself said, "a Nobel would be validating but not essential". The question to ponder on is why do Africans continue to seek such validation and are our achievements incomplete without the Western affirmation?

No, Trump did not behave like an African leader, he behaved as an American

In recent times, America's democracy has been in distress and the system has undergone rigorous testing, exposing some failures. Some of the failures, though in the personification of Donald Trump, is an accumulation of what American democracy really is. The flawed democracy and failure of democracy is not something Americans ever anticipated. Americans have often associated flawed democracy with foreign countries, and Africa as a continent has been mostly associated with dysfunctional democracy. The refusal by President Trump to concede electoral defeat in the 2020 election and his behaviour during his tenure has been compared to that of an African leader. While many African countries have indeed grappled with problematic leaders, America has been accused of meddling in the internal affairs of several countries, and thus its moral authority is heavily compromised. American leaders have in the past helped topple legitimate governments, just like their French and British counterparts have done in the past. Morality, one learns, is wielded by who controls power. While America sells the notion of human rights to the world, and the French sell their civilisation to the world as ways of conquering and controlling African countries, these are not seen through the lens of being undemocratic. Why do elections mean so much to the West to test true democracy? The push back from many Africans on social media against the narrative that President Trump behaved like an African leader when he refused to concede defeat highlights that over the years, America's problem has always been its hypocrisy and imagined superiority. Western countries have their own problems and African problems should never be the yardstick to compare social and political issues elsewhere across the world. The frequent murder of young African American men and women has never been restricted to Trump, it has always been part of the bigger American social crisis.

If President Trump has done any good for the world, and for Africans in particular, it is to remove the mask from America's face, revealing various systemic flaws. For once, many are questioning America's institutions, and its democracy. Are there things one can learn from the West? Of course there are things we should emulate, but there are many more things Africans can learn from each other.

Read: The white gaze: Why is Western documentation the measure of African reality?

The need for an intra-African conversation needs to be highlighted. The African dream can only be validated by Africans. The dependency on the West to also help in our struggles is more naive than we want to accept. It is more telling on our lack of contextual understanding of our history, that our lives must first matter to us before it'll matter to the West.

Why do we have to turn to the West for validation and to define our icons, heroes and heroines? It is no surprising that the concept of founding fathers, despite the evil many of them have done on this continent continues to be celebrated during each independence day. Many of our national heroes and heroines are not really ours, but they were given to us by the West, and judged through the lens of Western standards.

This article is written as part of a collection commissioned in partnership with African Crossroads under the theme "Re-imagining the pan-African dream -- reflecting on the past, experiencing the present and imagining the future". The contents of the series are the sole responsibility of This Is Africa Trust, and cannot be regarded as reflecting the official position of Hivos Foundation.

Tagged:
Copyright © 2021 This is Africa. All rights reserved. Distributed by AllAfrica Global Media (allAfrica.com). To contact the copyright holder directly for corrections — or for permission to republish or make other authorized use of this material, click here.