Africa: Grid or Solar - Looking for the Best Energy Solution for the Rural Poor 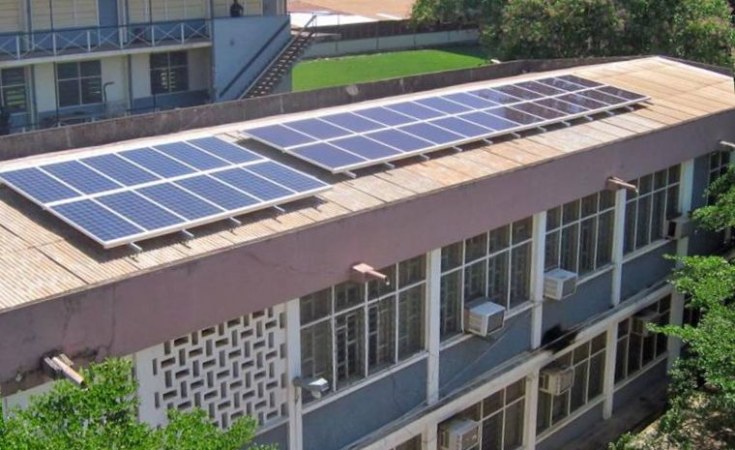 ZSM/Wikimedia Commons
Solar panels on the roof of one of the buildings of the College of Engineering, KNUST, Kumasi, Ghana in 2009.
The Conversation Africa (Johannesburg)
analysis By Jörg Peters and Maximiliane Sievert

South Asia has made tremendous progress in connecting rural areas to the electricity grid but the number of people in Africa without access has scarcely changed since 2010. More than half a billion people in Africa don't have access to electricity, meaning the continent hosts 72% of the world's non-electrified population. The UN Sustainable Development Goals have set a universal goal of ensuring access to affordable, reliable, sustainable and modern energy for all by 2030. To achieve this, the continent will require a big electrification push.

But what kind of electricity makes sense in rural Africa to make the most of available budgets? Over the past decade or so, a range of new off-grid solar products have emerged. They don't run machinery, but they light rooms, power radios or TVs and charge mobile phones. They're substantially cheaper than expanding the national electricity grid.

Grid electricity is often said to be critical for long-term human development because it provides sufficient power for appliances and small industries. But are the substantially higher investment costs justified by the economic impact?

Empirical studies of the impact of grid electricity on economic development in the Global South show mixed results. But it increasingly looks like evidence from Asia and Latin America doesn't apply to rural Africa.

This is in line with our own field work in Rwanda, Tanzania, and other countries. We found low consumption patterns in newly electrified areas, and electricity mainly being used for lighting and entertainment. We saw very little productive use.

In two more recent studies, we tried to understand what people in rural areas really want. How much do they prefer the grid over off-grid? For this purpose, we used two different willingness to pay techniques in rural Burkina Faso, Senegal, and Rwanda to estimate how much people are willing to pay for electricity.

In a stated willingness to pay approach, we asked people in the three countries how much they'd be willing to pay for a solar lamp, a solar home system, and a grid connection. Of course, such hypothetical statements cannot simply be taken at face value.

The second study in Rwanda uses a real purchase offer. People were invited to bid on three different sizes of solar kits. They could actually buy them - yet only if their bid exceeded a randomly drawn price. This was explained to them before making the bid, thereby creating incentives to submit a bid that reflected how much they were willing to pay.

The study in Rwanda revealed that households were willing to invest 20% of their monthly income to buy a very small solar lamp, a share that goes up to almost 70% once the solar kit also enables phones charging. It increases to more than 300% for a large 20-watt device offering lighting, charging and small entertainment services.

This is a lot relative to households' low income levels, but it's way too little to cover the cost of the solar devices or the deployment costs for a grid connection. The gap between what people are willing to pay and costs is substantial. For the three solar products in Rwanda, households were willing to pay between 30% and 40% of the market price.

Cost estimates for grid connection vary by context but are usually several thousand US dollars. Taking the hypothetical monthly connection fees people stated in Rwanda, Senegal and Burkina Faso, it would take five to 18 years to recover grid investment costs from users - assuming a very modest cost per connection of US$1,100.

What does this willingness to pay and the gap to investment costs mean? Many economists use it to guide policy decisions because it's interpreted as valuation. So a welfare-maximising government official would prefer a policy for which its constituency has a high willingness to pay. This is compelling but would inherently lead to very unequal decisions in favour of those with a high ability to pay.

Rather, our results confirm that electricity is highly appreciated by the rural poor, but universal access won't be reached soon without subsidisation - even for off-grid solar.

These subsidies for off-grid solar might well be justified, though, if important social benefits covered the gap, like better education for children or environmental benefits from less e-waste or kerosene usage. In fact, we found a range of such benefits from small solar kits in an earlier study in Rwanda.

The consumption patterns of households using solar were also similar to those in grid connected villages. More studies need to be done in other settings, but for now, subsidisation of off-grid solar seems to be a reasonable way forward to reach mass electrification, also recalling the modest impacts and high costs of on-grid electrification.