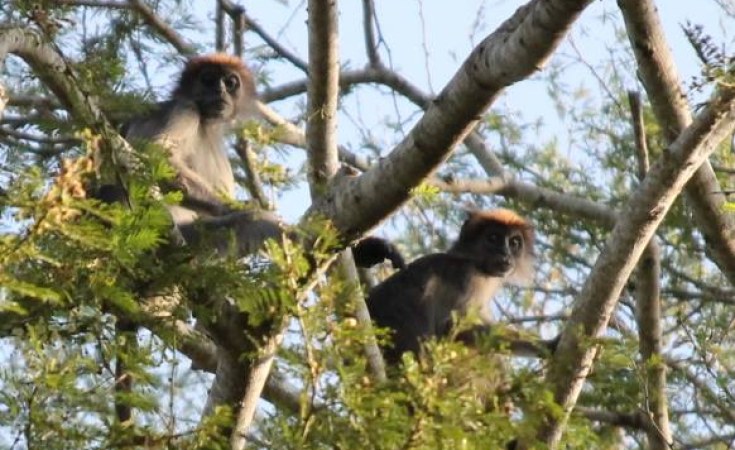 Human activities at the Mchelelo Primate Reserve in Tana River County have driven two rare monkey species to the brink of extinction.

The Kenya Wildlife Service (KWS) is now struggling to save the few remaining Tana River red colobus and Tana River crested mangabey monkeys, which are only extant on the Kenyan coast and nowhere else in the world.

Felling of indigenous trees that are key to the survival of species has left them with no habitats and severely affected their feeding patterns.

A visit by the Nation to Mchelelo revealed only 50 red colobus monkeys, down from more than 800 some 15 years ago, while the population of the crested variety has dropped from 600 to below 50.

"When the government decided to secure this area as a reserve, the locals opposed the plans. Even efforts to resettle them elsewhere were unfruitful as they argued that they could not give all that land to monkeys," he said

Mr Waciuri said the locals have been farming along River Tana, destroying the monkeys' survival corridor.

With the ficus trees were felled, whose flowers they feasted on, the primates shifted their interest to mango-tree flowers, leading to a serious conflict with the locals, who in turn rely on the mangoes for their livelihood.

Mr Wachiuri said the dwindling monkey population has seen the number of researchers who used to flock the reserve decline over the past five years.

He says the reserve used to be a renowned centre for medical research. Today, the only reminder of that glorious past are decrepit buildings that housed thriving restaurants.

The camp that manages the primate reserve is also as desolate as the reserve. From more than Sh200,000 a month in the 90s, the reserve barely gets Sh2,000 a month lately.

Efforts by the government to save the reserve have met stiff public resistance. In 1997, the World Bank funded the KWS to the tune of Sh500 million for the conservation of the reserve.

Residents of Mchelelo were to be relocated to Witu and others to Wenje and Mnazini, but the move was politicised by local leaders, who termed it a ploy to grab their land.

"It has been very difficult handling the locals here. It gets to a point where the river even dries up and one can cross on foot due to extensive farming along the river," said Mr Wachiuri.

Tana River Governor Dhadho Godhana noted that the interest of the national government in the reserve has diminished.

He, however, holds onto the hope that locals can be relocated and the area conserved for the primates to reproduce.

"The river is not drying up today, and some of the ficus trees are still there, so we only need to move the people from the reserve and give the environment room to regenerate," he said.

In the meantime, the face of Mchelelo Primates Reserve gets gloomier by the day.