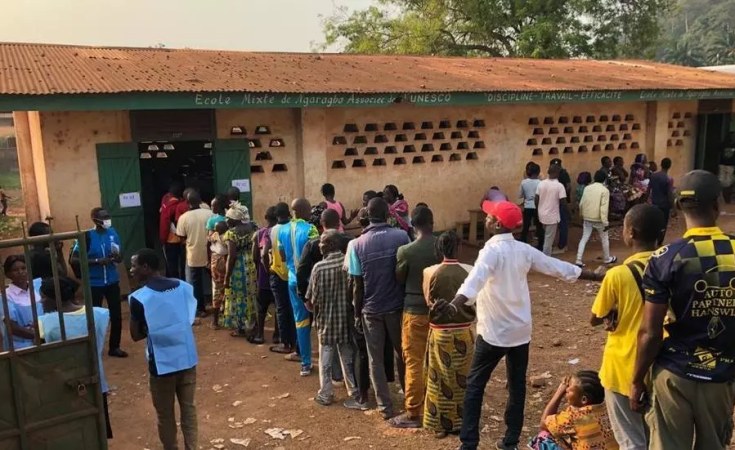 The Geneva-based UNHCR said "violence and insecurity" plaguing the Central African Republic's December 27 election had prompted thousands of refugees to seek haven in the neighboring Democratic Republic of Congo.

The more than 24,000 new arrivals had "placed a massive strain on resources," especially in the village of Ndu -- usually home to just 3,500 inhabitants, the UN refugee agency said.

Another 8,000 refugees had arrived mainly in border regions of Cameroon, Chad and the Republic of Congo, said the UNHCR, adding that it was concerned about reported "human rights violations taking place inside CAR." That's the acronym for the Central African Republic.

The former French colony is ranked among the world's poorest nations -- roiled since the 2013 overthrow of then-president Francois Bozize, who was barred from running in December's poll.

The government and the UN have accused him of inciting rebel groups in the leadup to the election -- a charge he denies.

A UNCHR spokesman said Friday a further 185,000 people were internally displaced after fleeing "at least 25 localities ... mostly as a preventative measure" since December 15.

Despite a 2019 UN-African Union-backed peace deal, large parts of the country remain in the control of armed groups.

But on Tuesday, 10 of the 17 candidates in a joint statement said voting for president and parliament had been "littered with numerous irregularities."

They called for a "straightforward annulment," asserting that only 695,000 of the 1.8 million registered voters had actually been able to cast their ballots.

CAR's constitutional court has until January 19 to rule on the result.

The elections had been seen as a key test of stability for the landlocked nation, wracked by conflict since 2013 and overseen by a 12,800-strong UN peacekeeping mission, MINUSCA -- alongside Russian and Rwandan units under bilateral pacts.

International bodies, including the EU and African Union, had provided funding to help organize the elections.

Russia, a strong ally of Touadera, said on Tuesday it hoped that the elections would "contribute to normalization in the country."

But Thierry Vircoulon of the French Institute of International Relations, a think tank, described December's ballot as "a giant step backward" compared with 2016, the previous election that was won by Touadera.

Although impoverished, CAR is rich in diamonds, uranium, timber and gold -- resources coveted by warring groups.

At 623,000 square kilometers (240,530 square miles), CAR is nearly twice the size of Germany and is comparable in area with Ukraine.

Of the former French colony's 4.7-million population, the UNHCR says a quarter has long been internally displaced or has fled abroad, seeking to escape violence.