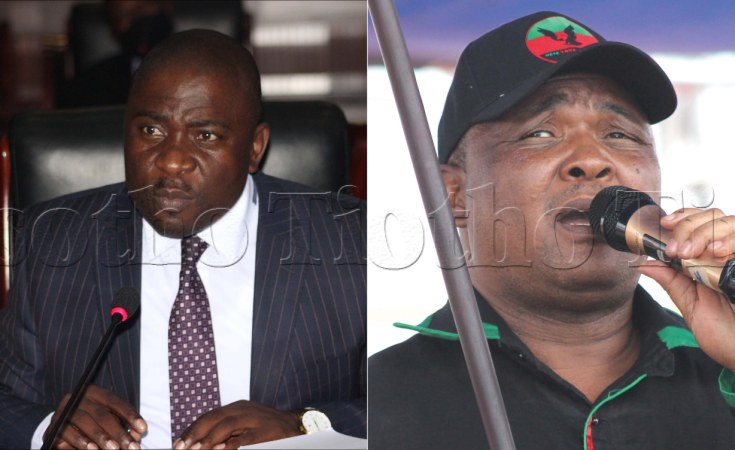 The ruling All Basotho Convention (ABC) and Democratic Congress (DC) parties yesterday agreed to stop attacking each other in public.

They also agreed on talks aimed at resolving their differences and ensuring that their governing coalition lasts the distance. The talks have been slated for 30 December 2020.

The two parties agreed to a cessation of hostilities at yesterday's meeting of their national executive committees (NECs) in Maseru.

According to well-placed sources from both parties, the meeting was held at the behest of the ABC. This after the DC had allegedly stopped attending their joint weekly meetings in October 2020 out of anger with the manner it said the ABC was conducting government business without its input.

One of the major bones of contention between the two parties was the judiciary's decision to prosecute former Deputy Prime Minister Mothetjoa Metsing and current Development Planning Minister Selibe Mochoboroane for treason. The Southern African Development Community (SADC) had urged Lesotho to suspend the prosecutions until after the completion of multi-sector reforms expected to bring lasting peace and stability to the Kingdom. The DC does not think the ABC has done enough to try and implement SADC's recommendations and rein-in the judiciary from proceeding with the prosecutions which threaten to stall the reforms process.

Mr Metsing, who leads the opposition Lesotho Congress for Democracy (LCD), was deputy prime minister at the time of the attempted coup while Mr Mochoboroane was Communications Minister and LCD secretary general.

Last month, the DC held a press conference where it accused the ABC of instigating the prosecution of Messrs Metsing and Mochoboroane. The prosecution followed a November 2020 Constitutional Court ruling which dismissed Messrs Metsing and Mochoboroane's bid to stop their prosecution on the grounds that a November 2018 agreement between the government and the opposition brokered by SADC bound Lesotho to stop all trials of politicians until after the implementation of the multi-sector reforms recommended by the regional body.

In its November 2020 judgment, the court ruled that for any international agreement to be binding on Lesotho, it must first be domesticated into local law through an act of parliament.

The trial was supposed to have commenced last month but it was postponed after a fresh application by Messrs Metsing and Mochoboroane to stop the Director of Public Prosecutions (DPP) from joining them to the case.

The whole issue has driven a wedge between the two key parties who had appeared to enjoy a solid working relationship. The DC is adamant the ABC could have done better to halt the trials and allow the crunch reforms process to be completed. The faction riven ABC on the other hand appears to hardly achieve consensus on any issue.

The two parties have since been trading blows in public. Just last week, the ABC held a press conference of its own where it said it would not shield DC leader and Deputy Prime Minister Mathibeli Mokhothu from prosecution for alleged human trafficking activities. Addressing the media, ABC secretary general Lebohang Hlaele and spokesperson Montoeli Masoetsa said Mr Mokhothu should step down from his post as deputy prime minister if he is charged with human trafficking.

They said stepping down would be an "honourable thing" for Mr Mokhothu to do as that is exactly what their leader, Mr Thabane, did in May 2020 when he stepped down from the post of prime minister after being hauled to court over the 14 June 2017 murder of his ex-wife, Lipolelo Thabane.

The ABC press conference was held in the wake of allegations of Mr Mokhothu and other senior DC officials' alleged complicity in human trafficking activities alongside a Pakistani, Rana Qamar.

The allegations are contained in a High Court application by an immigration officer, Mapeete Jonathan, challenging her transfer from Moshoeshoe I Airport to the head office of the immigration department in Maseru.

The ABC's press conference provoked a furious response from the normally soft-spoken Mr Mokhothu who over the weekend called on the ABC to rein in what he described as the Hlaele-led "Satanist" faction of the party which he said was bent on tarnishing his good name and that of the DC. Failure to rein in Mr Hlaele would mean that the ABC was in full agreement with the sentiments of its secretary general and his allies, Mr Mokhothu said.

The escalating tensions between the two parties prompted yesterday's meeting to stop their differences from spiraling out of control and collapsing the seven-month-old governing coalition which replaced the previous Thabane led four party administration in May this year.

According to sources from both parties, yesterday's crisis meeting was co-chaired by ABC deputy leader, Professor Nqosa Mahao, and his DC counterpart Motlalentoa Letsosa. Mr Mokhothu did not attend the meeting.

Mr Hlaele, who had this week told the Lesotho Times that his party was more than ready for a fight with the DC, attended the meeting.

Authoritative ABC and DC sources who attended the meeting told this publication that the two parties agreed to a cessation of hostilities ahead of talks aimed at saving the coalition from collapse.

"It was agreed that our two parties' spokespersons (Serialong Qoo for the DC and Masoetsa for the ABC) will release a joint statement on yesterday's meeting.

"The main question was whether the two parties are still committed to working together given the recent fallout and events that have been unfolding in the media. Both parties indicated that they were committed to this coalition and we agreed that we should therefore cease fire.

"Our two parties have committed to talking to their supporters to cease fire because we cannot have peaceful talks while we are exchanging words," said a DC source.

Asked if the two parties had apologised to each other for their spats, the source said the meeting did not interrogate the issues which had caused the fallout but it agreed to prioritise the cessation of hostilities to ensure that the 30 December 2020 talks are held under a conducive environment.

"The 30 December meeting will discuss the real issues because our members would have calmed down to allow us to interrogate the issues with sober minds," said the source.

An ABC source also confirmed that the two parties had tasked Messrs Qoo and Masoetsa to jointly communicate the decisions of yesterday's meeting.

"Talk to Masoetsa and Qoo, they are responsible for communicating today's (yesterday's) decisions with the media. The mood was cordial at today's talks. Officials from both parties were very calm and respectful to each other.

"We agreed to meet again on 30 December to discuss the thorny issues that have been playing out in the media. It was also agreed that those at the forefront of the fights should immediately stop to give us a chance to iron out the issues. The meeting was co-chaired by Mahao and Letsosa. Mokhothu didn't attend the meeting and from our side, Phori and Kabi were absent," the ABC source said.

Mr Letsosa refused to comment on yesterday's meeting, saying, "the meeting agreed that its decisions must be communicated by the DC and ABC spokespersons.

"The national executive committees of the ABC and DC met today (Wednesday) and the following decisions were made: the two parties and their other partners supporting this coalition government are still committed to this current coalition government, steadily holding hands together to ensure that they stabilise and lead this government to 2022.

"The two committees are cognisant of the fact that there are issues negatively affecting their relationship and the two committees agreed to engage in talks aimed at ironing out these issues and bringing the situation to normalcy. The two committees appeal to all their membership, both in different leadership structures and ordinary members, to ceasefire and stop engaging in war of words on different media platforms to give talks a chance to take place under peaceful and calm environment.

"It is your responsibility, as ABC and DC, to ensure that these talks are fruitful. The next meeting between the two national executive committees will take place on 30 December 2020 to discuss issues and mend fences," the statement reads.

Mr Qoo could not be reached for comment as his mobile phone rang unanswered.

High-Profile Trials in Danger of Collapsing

Masoetsa Hits Back At 'Desperate' Moleleki