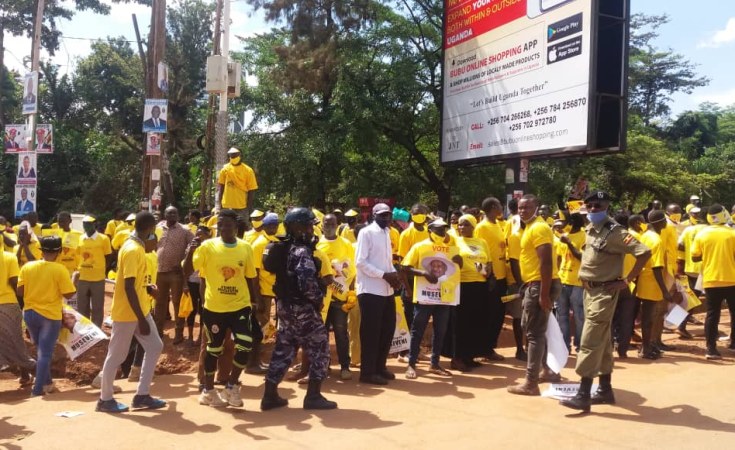 Kelvin Atuhaire/Daily Monitor
NRM supporters staged along the Nakawa Road to celebrate the nomination of their presidential candidate Yoweri Kaguta Museveni. This is in spite of the EC's ban of gatherings during the exercise.
The Monitor (Kampala)
By Juliet Kigongo

High Court Judge Musa Ssekaana on Monday dismissed an application, with no orders to costs, filed by Kampala Lord Mayor, Mr Erias Lukwago earlier this month challenging EC's decision to suspended campaign meetings in 12 districts which he said was irrational, illegal and that was never accorded a fair hearing as the political head of Kampala.

Justice Ssekaana reasoned that there was no justification for dispensing with the right to be heard due to the urgency and emergency in order to stop the spread of the coronavirus.

"In the present case the respondent (EC) was trying to stop the spread of deadly Covid-19 and this is justifiable reason not to accord a hearing since it was acting in an emergency, otherwise the intended purpose would have been defeated if the respondent was to delay the decision. Secondly it was impractical to give a hearing to all affected parties like in this case a right to be heard maybe suspended," Justice Ssekaana held.

"The decision of EC is premised on the increased numbers of infections of Covid-19 and this is uncontested as the same could still be taken judicial notice supported by the current worldwide spike of a new wave of corona infection which has seen other countries getting in the second lockdown," he added.

The judge further explained that EC is given special powers in case of any emergency under section 50 of the Electoral Commission Act which cannot be said to be unfettered and non-reviewable.

In his lawsuit Mr Lukwago had contended that the press release issued by EC on December 26 , 2020 violated his right to a fair hearing. However, court ruled that though the right to be treated fairly and justly is provided under the constitution, it can be restricted in certain instances like emergency situations.

He had also sought a declaration that the suspension was illegal, irrational, ultra vires and constitutes an egregious affront to his right to associate and interface with the electorate and the entire citizenry which is a cornerstone of a free and fair election.

Mr Lukwago had argued that the EC's decision amounted to a deprivation and violation of candidates' rights to disseminate ideas, political platforms or agenda to the electorate which is a vital tenet of electoral democracy.

During hearing EC through its lawyer, Mr Eric Sabiiti told court that the electoral activities during this election period were supposed to be conducted in accordance with guidelines aligned to Ministry of Health Standard Operating Procedures (SOPs) aimed at preventing of the spread of the coronavirus.

Court further heard that candidates were allowed to hold campaign meetings in a regulated manner with limited attendance of a maximum of 70 person to enable the observance of the 2-meters social distancing, however, the number was later revised to a maximum of 200 persons.

"When the campaigns kicked off, we noted with concern the noncompliance by some candidates with the same guidelines while conducting campaigns. Several engagements were made with some candidates and their agents but there was no improvement," Mr Sabiiti explained.