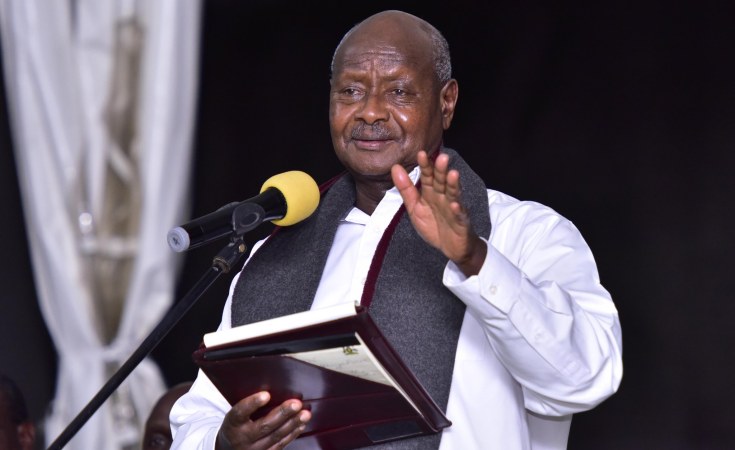 Kampala — Ugandan President Yoweri Museveni holds a nearly 3-to-1 lead over challenger Bobi Wine among registered voters willing to declare their voting intentions ahead of Thursday's election, a new Afrobarometer survey shows, but many respondents would not say how they intended to vote, so the final outcome may be much closer. The nation could also be headed toward electing a more closely divided Parliament.

As of late December and early January, more than half (53%) of survey respondents who self-identified as registered to vote said they would cast their ballots for the long-time incumbent, who won 60.75% of the vote in claiming his fifth term in 2016. About one in five respondents (18%) favoured the pop star-turned-politician Bobi Wine, whose real name is Robert Kyagulanyi Sentamu. But about one-fourth of respondents did not disclose how they intend to vote.

The expected parliamentary vote mirrored the presidential vote fairly closely in terms of party preferences. Depending on how those who would not reveal their preference break, the Uganda Parliament could be quite closely divided after the upcoming election.

- However, about one in four registered voters refused to answer the question (22%) or said they did not know how they would vote (2%).

- When asked who they thought would win the election, regardless of their own intentions, a larger majority (57%) predicted victory for Museveni, compared to 21% for Bobi Wine.

- Support for the challenger was stronger in urban areas (26% of registered voters, vs. only 15% in rural areas) and among younger Ugandans (24% of 18- to 35-year-olds). Even among these groups, Museveni outpaced his challenger (35% in urban areas, 45% of younger voters), though undeclared voters add a degree of uncertainty.

- The parliamentary outlook was quite similar. Among registered voters, 52% said they planned to vote for the NRM candidate, while 29% identified another party. But 18% did not voice their preference (16% refused, 2% said they "don't know"). While this suggests that the NRM is likely to retain control of Parliament, if these "quiet voters" break more strongly for the opposition, as one might expect in the current campaign environment, the NRM could end up with at best a slim margin of control (compared to its two-thirds majority in the current Parliament).

Afrobarometer is a pan-African, nonpartisan survey research network that has provided reliable data on experiences and evaluations of democracy, governance, and quality of life in 38 African countries since 1999.

Afrobarometer conducts face-to-face interviews in the language of the respondent's choice with nationally representative samples.

With financial support from the Embassy of the Kingdom of the Netherlands in Uganda, the Afrobarometer team in Uganda, led by Hatchile Consult Limited, interviewed 2,400 adult Ugandans between 22 December 2020 and 7 January 2021 in 300 enumeration areas across 110 districts. A sample of this size yields country-level results with a margin of error of +/-2 percentage points at a 95% confidence level. This was the 11th Afrobarometer survey in Uganda since 1999.

Tagged:
Copyright © 2021 Afrobarometer. All rights reserved. Distributed by AllAfrica Global Media (allAfrica.com). To contact the copyright holder directly for corrections — or for permission to republish or make other authorized use of this material, click here.