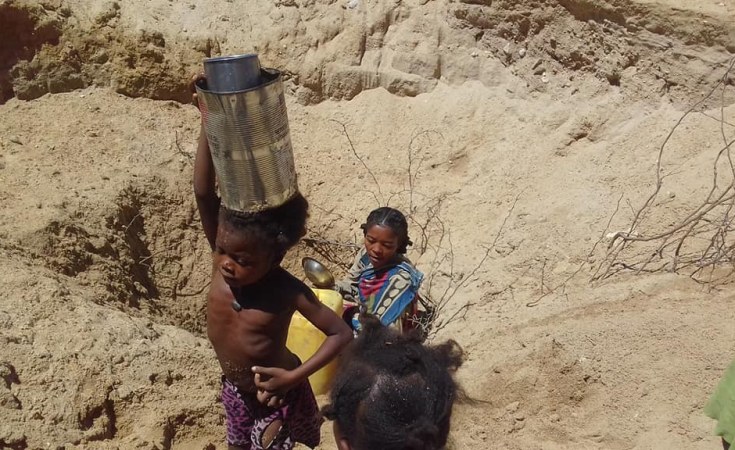 WFP/Volana Rarivoson
Kalea has to wake up at 3 AM to fetch water. But the dry spells have turned the Laniry River into a vast desert.
allAfrica.com
By Peter Kenny

Geneva — Five years of drought have bludgeoned a "breadbasket" region of Madagascar and, along with the coronavirus, have disrupted local labour patterns in the south, resulting in a looming food crisis.

Lola Castro, the regional head of the United Nations World Food Programme, told journalists based at the UN in Geneva on Tuesday that the situation in the country's south has gradually deteriorated over the past month. Added to the drought, Covid-19 has resulted in famine-like conditions in the area.

"We have seen a doubling of the numbers of food insecure between the data we have in July 2020 and November 2020," Castro said in a virtual news conference.

"We move from 700,000 people made insecure in the south... of Madagascar to 1.3 million people," she added. Castro is the WFP's director for Southern Africa and the Indian Ocean.

"In September 2020, WFP was called to action to go to areas where we have never been, providing food assistance, [in an area which had been] the breadbasket of the grand South," said Castro.

There had not been a "real, proper harvest" as a result of the five-year drought.

"We were called in because people were dying. And there were such numbers, of severe, acute malnutrition among children, that we had to intervene."

Castro explained that southern Madagascar's population relies on providing casual labour in urban areas or rural fields for income to tide them over during the lean season, generally between November and April every year.

"But this year, there was no labour. They moved around without finding any work anywhere,  neither in urban areas nor in the rural areas, due to the drought and Covid lockdowns."

With drought conditions persisting into 2021 and a poor recent harvest, weary communities have few resources to fall back on, and many people have had to leave their homes in search of food and work, she said. There is no rain, only thunderstorms that have blasted the region, destroying crops.

The 1.35 million people who are projected to be food insecure at present make up 35 percent of the region's population, Castro said, and 135,000 children are severely or acutely malnourished.

"What are we seeing is that children have abandoned school and 75 percent of the children in this area are either begging or foraging for food." People eat whatever is available, including cactus mixed with roots and other seeds.

"The situation is even more dramatic, because this year, enough funds have not arrived on time to really be able to procure food or provide cash transfers to these people."

The WFP said it currently provides food assistance for almost 500,000 severely food-insecure people in the nine hardest-hit districts in the south. By June it wants to scale up its help to reach almost 900,000 of those most vulnerable, but support will be needed for struggling families well beyond the current lean season.

The WFP – winner of the Nobel Peace Prize in 2020 – urgently needs $35 million to fund lifesaving food and cash distributions and malnutrition treatment programmes, including emergency school feeding for 150,000 children.