Ethiopia: As a Tigrayan, My Bond With Ethiopia Feels Beyond Repair 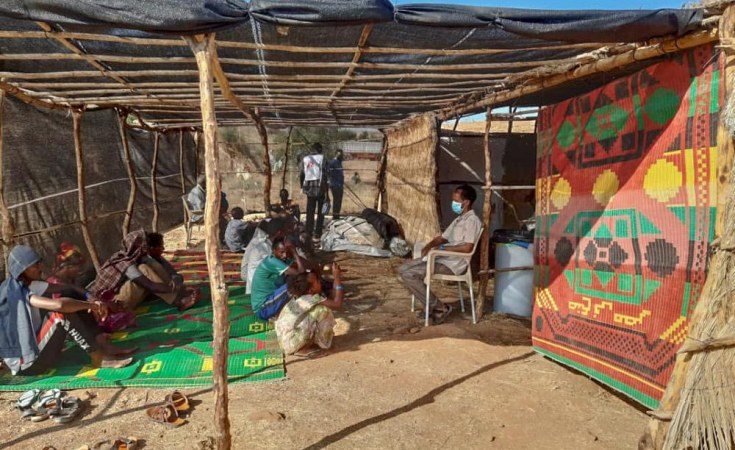 MSF
On 10 November 2020, the first wave of people from Ethiopia started to arrive Sudan. As of 25 November, UNHCR has registered 42,000 arrivals but the number is likely higher, as many have not been registered.
African Arguments
opinion By Temesgen Kahsay

We're told the war is not with ordinary Tigrayans. Yet as thousands suffer and our compatriots remain silent, that's how it feels.

As a child growing up in the then Ethiopian city of Asmara in the 1980s, my parents used to ask me what I wanted to be when I was older. My answer was always that I either wanted to be a fighter pilot or army general. The reason was simple. My father was a soldier in the Ethiopian army under the Derg regime and I too wanted to kill the nation's "enemies".

Growing up at that time of war, the sounds of rockets and bullets supplied the soundtrack of life and the state-controlled media provided the script for making sense of the world. I was taught to see the conflict in black and white, with good Ethiopian patriots on one side and the hateful rebels on the other. I memorised war songs and wrote poems to honour war heroes. In the last days of the brutal Derg regime in 1991, I vividly remember crying as I held aloft the green, yellow and red flag of Ethiopia.

What I didn't know then is that the "enemies" my father had been fighting including his cousins and the children of our neighbours. The civil war cut deep into the social and cultural ties of Ethiopia's many ethnic groups, often pitting members of the same families against each other. My father, from the Tigray region, had been battling members of his own ethnic group in the rebel Tigrayan People's Liberation Front (TPLF) and Eritrean People's Liberation Front (EPLF).

For my family, it was a precarious time to be Tigrayan and Ethiopian. Among supporters of the Derg regime, we were mistrusted because of our ethnicity and suspected of being agents of the TPLF. Among Tigrayans, we were seen as having betrayed our people by siding with the government. Like thousands of other families, we received abuse from different sides as we tried to juggle our ethnic and national identities.

In 1991, the repressive Derg regime was defeated. The TPLF effectively became the leaders of Ethiopia and the EPLF took control in Eritrea, which became an independent country. My family left Asmara for Addis Ababa where we lived in a refugee camp for the next ten years. The new government was not in any hurry to help the families of soldiers that had fought against it.

Everything in Ethiopia had changed, but our questions of belonging remained as complex as ever. As refugees from Eritrea, we were regarded as outsiders. But as Tigrayans, we were seen as beneficiaries of the new Tigrayan-dominated government.

For the next 27 years, the TPLF-led ruling coalition governed the country. It pursued a form of ethnic federalism that has led to growing ethnic consciousness and a weakening of pan-Ethiopian identity. Over time, however, popular resistance to Tigrayan domination and its undemocratic rule led to its demise amid huge protests. In 2018, the ruling coalition selected a new leader. Abiy Ahmed, from the Oromia region, came to office promising hope, peace and unity. This did not last long. His relations broke down with the formerly powerful TPLF officials, who retreated to their home region. On 4 November 2020, Abiy declared war in Tigray.

The ongoing conflict has brought about another reckoning on what it means to Tigrayan in the larger body politic of Ethiopia. The war is happening in a context of resurging pan-Ethiopianism that has framed the TPLF as its archenemy. The government has portrayed its actions as a "law enforcement operation" against the TPLF and not a war against the people of Tigray, and yet this is how many people have experienced it.

Many Tigrayans support the TPLF, as seen in the result of the regional election in September 2020 which was seen as illegal by the federal government. Moreover, under the current "law enforcement operation" launched to capture the party's top leaders, thousands of ordinary people have been killed or displaced. Meanwhile, many non-Tigrayans celebrated the capture of Tigray's capital Mekelle and remained silent when the government obstructed aid reaching their compatriots. Ethnic profiling and harassment of Tigrayans is on the rise.

Some friends and family members whom I've known for a long time have come out supporting the war, despite the untold devastation and misery of countless families it has caused. My social ties have become thinner and thinner. In the face of emerging humanitarian crisis affecting ordinary Tigrayans, the deliberate attempt of the government to deny aid and the silence and the support of the majority of Ethiopians have eroded the sense of belonging to and identification I once had with Ethiopia.

One of the most painful aspects for me is that my father, who has always been a proud Ethiopian, has once again been condemned to suffering and isolation by the country for which he had sacrificed 28 years of his life. Personally, it feels impossible to be both Tigrayan and Ethiopian in the current situation. Because of the war and the responses of so many of my compatriots to the suffering of Tigrayans, the bond I had with Ethiopia feels broken beyond repair.

Temesgen Kahsay is an Assistant Professor at the Norwegian School of Leadership and Theology.