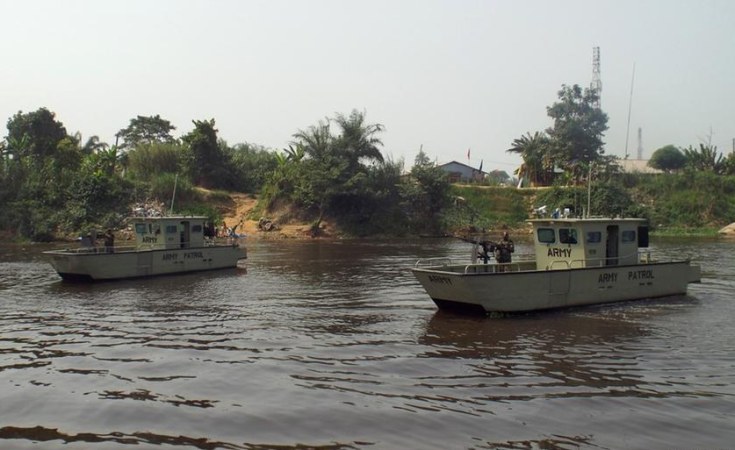 The Nigerian Navy has warned Niger Delta militants, who last week threatened to resume attacks on oil facilities over alleged Federal Government lackadaisical attitude to the development of the zone to have a rethink and toe the path of dialogue or be dealt with decisively.

This came as South-South leader, Chief Edwin Clark, asked the Minister of Niger Delta Affairs, Chief Godswill Akpabio, to stop his constant interference with the activities of Niger Delta Development Commission, NDDC, for effective performance and service delivery to the people of the zone.

He argued that the decision negates the provision of the Act setting up the commission.

It would be recalled that some former militant groups had in recent times threatened to attack oil and gas installations in Niger Delta over Federal Government's alleged interference in the management of NDDC and Presidential Amnesty Programmed, PAP.

Garba, who represented the special guest of honour, Chief of Naval Staff, Vice Admiral Ibokette Ibas, on the occasion said: "The Nigerian Navy and indeed the Nigerian military is poised to deal decisively with any person who in any way undermines the unity of this country. Specifically, the destruction of oil and gas infrastructure is economy sabotage.

"I will advise that whoever is thinking of that should please heed the way of dialogue, discuss with government as to what their grievances are and I am sure the government will find a way to solve such problem.

"I am aware that components of the government are already in touch with the relevant bodies in Niger Delta and other places to ensure that the problem (threats) does not rear its ugly head.

"I want to assure that we are ready to tackle any problem in line with our statutory responsibility."

Osifo wants the court to declare that the Federal Government cannot appoint Akwa or any other single individual to head the commission in the absence of a properly constituted board to run the affairs of the NDDC.

He also wants the court to declare that "the act of the Federal Government in appointing Akwa as sole administrator of the NDDC is illegal, unconstitutional, null and void.

"A declaration that the Senate cannot lawfully and constitutionally approve any budget for NDDC or appropriate any money to the NDDC in the absence of a properly constituted governing board."

Osifo also wants the court to restrain the NDDC and National Assembly from appropriating funds or approving budgets for the commission until the board of the NDDC is properly constituted,

He also wants "An order restraining Akwa from parading himself as the Administrator of the NDDC, which position is unknown to the laws setting up the NDDC."

Clark also called on President Muhammadu Buhari to immediately constitute the board of the NDDC in consonance with the act establishing the commission.

Speaking, yesterday, at his Abuja residence when he received the Interim Administrator of NDDC, Effiong Akwa, and his Interim Management Committee, IMC, Clark called on President Buhari to set aside a special fund to complete the East West Road started by the administration of former President Olusegun Obasanjo.

Clark said: "There is a law governing NDDC, which we all participate in producing and no one should bypass that law or bridge it. Even Mr President has no power to bypass the law establishing NDDC except he has to go back to National Assembly for an amendment. So, any attempt to bridge the law will become illegal, null and void.

"There has been many arguments about sole administrator or the legality and illegality, which have been discussed. The NDDC was under the presidency and we know how it was used. But many of us never thought removing NDDC to Niger Delta Ministry was the best thing to do because it would be misused.

"Niger Delta Ministry is our ministry, therefore, NDDC going to the ministry would not have been a bad idea, so we supported it. But what we are opposed to is that NDDC is an independent agency like any other one, like NPA. Other agencies, the ministers did not abandon their ministries to concentrate on these agencies. That is the problem we have.

"The problem we have, therefore, is the constant interference with the affairs of NDDC by the Minister of Niger Delta. So, I do hope that in your performance of duties, you should have a free hand.

"So, we have been protesting that the Federal Government should make available special funds for that very important economic road. In the recent budget, Kano State alone has three roads within Kano, costing about N60 billion to be constructed with our oil money.

"What is being done for us? Do we have to go and beg for money to build roads? So, whoever is the minister should live above his personal interest and put the interest of Niger Delta first.

"So, Mr. President should provide enough for the completion of the East West Road."

We'll appeal to our boys to give peace a chance

Clark, who appealed to the youths of the zone to give peace a chance to allow for development, said: "Nobody will leave this world with what they stole or what you acquired illegally, but the good name you leave behind, your children will benefit from. Let's love ourselves. I wish you all the best of luck. We appeal to our boys to give peace a chance. Thank you for coming to visit me."

Road to be completed in 6 months -- Akwa

Earlier in his remarks, the Interim Administrator of NDDC, Effiong Akwa, who assured the people of the zone that the East-West Road would be completed and commissioned in six months, appealed to Delta youths, who last week blocked the Delta State axis of the East-West Road, protesting his appointment by President Buhari, to allow peace to reign for the benefit of the zone.

Speaking further, the NDDC boss noted that the abandoned 750-bed hotels in the universities in Delta, Ondo and Rivers states would be completed and commissioned in the next three months.

He commended the National Assembly for approving the 2020 budget of N453.2 billion for NDDC, last December after 12 months of not having a budget to work with, even as he assured that verified contracts that have not been attended to for years, would also be paid in phases.