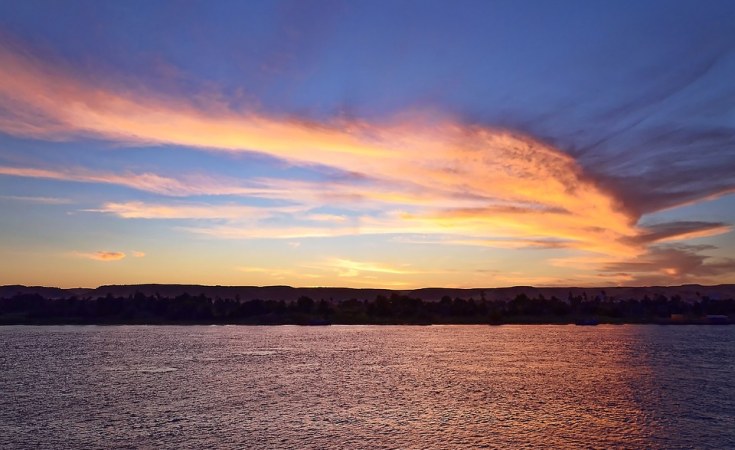 Fifty years after Nile River flooding was brought under control by the Aswan High Dam, the billion-dollar project is still revered as a fountain of life - generating huge amounts of electricity and bringing water to both Egypt and Sudan.

Soviet funding and ingenuity were key to building the rock-fill dam - a feat that took more than a decade - with Egyptian towns and villages finding themselves with electricity for the first time, largely thanks to Soviet assistance in building the transmission networks.

Heavy machinery was sent in from the USSR to move the enormous amounts of stone and clay - 43 million cubic metres - used to erect the dam, designed by the Moscow-based Hydroproject Institute.

Then, on 15 January, 1971, at a ribbon-cutting ceremony to officially open the dam, the flags of both Egypt and the Soviet Union were proudly flown.

January 9, 1960, building of the Aswan dam in Egypt, begins. The dam is made primarily from crushed hornblende granite from the adjacent valley cliffs. The resulting Lake Nasser of is one of the largest man-made lakes in the world, inundated archaeological sites & displaced many pic.twitter.com/nQNfCq8KRV

The inauguration was attended by the Soviet head of state, Nikolai Podgorny, and Egypt's then president Anwar Sadat - who had taken over the top job following the unexpected death of nationalist leader Gamal Abdel Nasser months earlier.

Located at the border between Egypt and Sudan, the Aswan Dam is fed by the River Nile. The build-up of water formed Lake Nasser, one of the largest man-made lakes in the world.

By solving a centuries-old problem of flooding and drought, the damming of the Nile gave Egyptian agriculture a massive boost - allowing farmers to protect their crops by regulating the amount of water allowed into their fields.

Of course the legendary Nile River had long sustained Egypt and its neighbouring countries, offering a source of transport, commerce and irrigation.

However the Aswan project massively modernised Egyptian political traditions and, when it reached its peak output of 2.1 gigawatts, the hydroelectric triumph produced about half of Egypt's entire energy needs.

The dam's clean, sustainable and environmentally friendly power has in turn enhanced tourism, paved the way for export crops, increased fishery production, and saved Nile water from being wasted in the Mediterranean Sea.

Egypt had initially looked to the United States for funding and scientific expertise in building the dam but, when international conflict following the nationalisation of the Suez Canal ruled out the possibility of a US-Egypt partnership, the Egyptians turned to Soviet Russia.

The move paid off, with the USSR's billion-dollar financing of Aswan far eclipsing the $270 million proposed by the US before that collaboration fell through.

When former Soviet leader Nikita Khrushchev was hosted by his new ally Nasser in Cairo in 1964, his visit marked the first time a Soviet of his rank had set foot in an Arab country.

While Aswan is only half as powerful as the colossal Grand Ethiopian Renaissance Dam, which is nearing completion on Ethiopia's stretch of the Nile, it nonetheless plays a critical role in assuring the livelihoods of the 95 percent of Egyptians who live along the Nile or its delta.