Tunisia: Wounded of the Revolution Still Struggle 10 Years On

Cernavoda/Flickr
Government buildings in Tunis, the capital city of Tunisia.
JusticeInfo.net (Lausanne)
By Olfa Belhassine, Our Correspondent in Tunis

Ten years after the victory of the Tunisian Revolution on January 14, 2011, the authorities still have not published the official list of wounded and martyrs of this event. About a dozen of them have been organizing a sit-in in Tunis since December 26. They have alerted the media, attempted a hunger strike and sewn up their lips. So far in vain.

Kram, a pretty little coastal town in the northern suburbs of Tunis, hides behind the railway line its most deprived area: the 5-December district in Kram West. Its inhabitants like to compare the railway line to the Berlin Wall which, before the fall of the Communist bloc, separated prosperous West Germany from austere East Germany. This reflects a gap that has widened over the years between the poor Tunisia of the interior and the rich Tunisia of the coast. And this divide is considered to be one of the factors that sparked the revolution in December 2010.

For it was to Kram West on January 13, 2011, that President Ben Ali's security forces, sent mass reinforcements, fearing the presidential palace would be stormed. They pursued and attacked the young demonstrators who, like others across the country, had gone out to say they had had enough of a tyrannical and corrupt regime. Walid Kassraoui, 30, is one of the 40 people injured in the 5-December district during these events. He is now sitting-in, along with a dozen wounded of the revolution, at the vast, luxurious office of Dean Abderrazak Kilani, recently appointed president of the Authority on Resistance Fighters, Martyrs and Wounded of the Revolution and Terrorist Operations.

This building has been transformed into the "HQ" of the crisis. Mattresses, blankets, and bottles of mineral water fill the place. Banners call on Kilani to "Enforce the Law. Publish the list." The protesters want publication of the final list of martyrs and wounded of the revolution in the Official Gazette of the Tunisian Republic, according to Article 6 of Decree No. 1515 of 2013 on the functioning of the Authority.

"I was shot in the leg by Ben Ali's death squads. The security guard's bullet hit my knee and instantly ripped it out," says Kassraoui. He now has a prosthetic leg. Following his threat at the end of last summer to go on a hunger strike in the Kasbah in protest at the deterioration of his health, the office of the president covered the costs of his treatment.

"The wounded of the revolution should all be treated equally. Their care should not be linked to persons or circumstances. This is why we have been on hunger strike since December 21," explains Kassraoui, who is unemployed after working for four years at the communication unit of the Truth and Dignity Commission. "The wounded, most of whom are disabled for life, are living in a situation of social, economic, physical and psychological distress, to which the political leaders of these ten transition years have been indifferent."

Haydar Chawali was training to join the army when the revolution broke out. The young man was shot in the head as he accompanied demonstrators in the streets of Zahrouni, an underprivileged neighbourhood of the capital, on January 13, 2011. After that, his fate was like all those wounded in the revolution: a shattered future, reduced physical capacities and dreams of a better life gone up in smoke.

Recruited as a high school janitor under the general amnesty law of February 2011, he suffered from continuous dizziness and became exhausted after a few hours. He ended up being fired. On December 17, 2020, he protested with a group of wounded on Kasbah Square, opposite the seat of government, against the authorities' failure in 10 years to do anything for these young revolutionaries. But the police clamped down fiercely on the protesters.

"They insulted us, insulted our mothers, insulted the revolution, took us to the station, beat us up and threw us in jail for several hours, before making us sign a commitment that we would not return to the Kasbah Square. Enough is enough! That's when we decided to go on hunger strike inside the Authority on Resistance Fighters, Martyrs and Wounded of the Revolution to demand that our names finally be published in the Official Journal and that official recognition be given to us," says Haydar Chawali, now aged 34.

The wounded set their mattresses down in the entrance hall of the Authority, in downtown Tunis, in the drafts and cold of early 2021. "This was in the heart of an institution that is supposed to protect and take care of them!" exclaims Olfa Lamloum, director of the Tunis office of the NGO Alert International. On January 5, they held a press conference in the presence of several national associations, including the General Union of Tunisian Workers (UGTT), an influential trade union federation which supports them.

All those who spoke during this meeting with the journalists insisted on the symbolic dimension of publishing the list. "This would embody rehabilitation for us," said one of the protesters. "It's a way of saying our sacrifices have not been in vain. It's also an argument against denial of the revolution, which continues to flourish."

Four wounded people, including Wael Karafi who lost his leg on January 8, 2011 in Kasserine, came to the press conference their mouths sewn up with thread and their lips bloody. On January 8, ten years to the day after his injury, the young Karafi climbed seven floors to Kilani's office. "When we went after the press conference to see the head of the Authority and ask him once again to apply the law and publish the list, he said he couldn't do anything. So we asked him to quit because of incompetence."

Battle of the lists

This list is one of the most controversial issues of the last ten years, reflecting a lack of political will in a context where supporters of the former regime have come back to power. The wounded of the revolution, tossed between civil and military courts and then the slow specialized chambers, have also been the subject of commissions and inquiries. Meanwhile, their living conditions continue to deteriorate.

After the revolution, a commission was set up to investigate abuses by the security forces. It was chaired by lawyer Taoufik Bouderbala. In its report, this commission estimated the number of dead at 337 people and the number of injured at 3,000. The military courts in the various regions also compiled lists of the injured. In 2012, parliament passed a law setting up a commission within the High Commission on Human Rights to establish a list of the wounded and martyrs of the revolution.

This was again chaired by Bouderbala. In October 2019, after more than six years of research, the commission published on its website the names of people identified as victims. It speaks of 129 "martyrs" and 634 wounded. However, some of the wounded who have since 2013 had military tribunal judgments in their favour were not on this new list. As for the Truth and Dignity Commission, it collected the files of 111 martyrs and 892 wounded, without having the time to investigate them.

The authorities are now accused of exploiting disputes between victims over the October 2019 list. Those staging the sit-in at the Authority want it published immediately, even if it means attacking it in court over the names that do not appear, but other wounded people not on the list are threatening to kill themselves if it is published in the Official Journal.

Lawyer Lamia Farhani, president of the Awfiya association that defends the victims of the revolution, regrets that nothing has been done to coordinate the work on these various lists. "All that was needed was to cross-reference the various lists, not forgetting the minutes of the military courts. But when there is a lack of political will to resolve the problem, everything becomes so complicated. It's a real injustice to those who have made our freedoms possible," says the lawyer and sister of Anis Farhani, who died under a hail of police bullets on January 13, 2011, in Tunis.

Olfa Lamloum refuses to believe it is just technical and bureaucratic incompetence, especially since there have been eleven governments facing this issue over the past ten years. "I can find no other explanation for this refusal to publish the list than the various 'reconciliation' projects we have seen in the past two years. They all seek to close the chapter of the revolution.

The political elites seek to eclipse the role played by these young people, all of whom come from working class neighbourhoods and the interior regions. It's class discrimination!" says the Alert International director. Meanwhile, the wounded say they will not leave the premises of the Authority until their demand is met. "Otherwise, you will take us out of here in our coffins!" promises Walid Kassraoui. 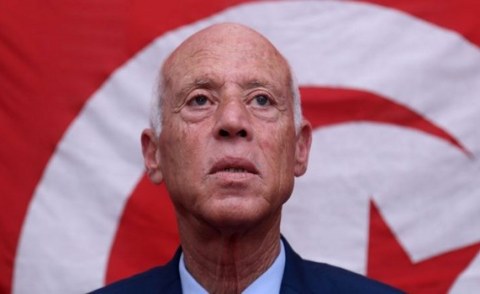 The Revolution Continues - Tunisian Youth Are Back on the Streets
Tagged:
Copyright © 2021 JusticeInfo.net. All rights reserved. Distributed by AllAfrica Global Media (allAfrica.com). To contact the copyright holder directly for corrections — or for permission to republish or make other authorized use of this material, click here.