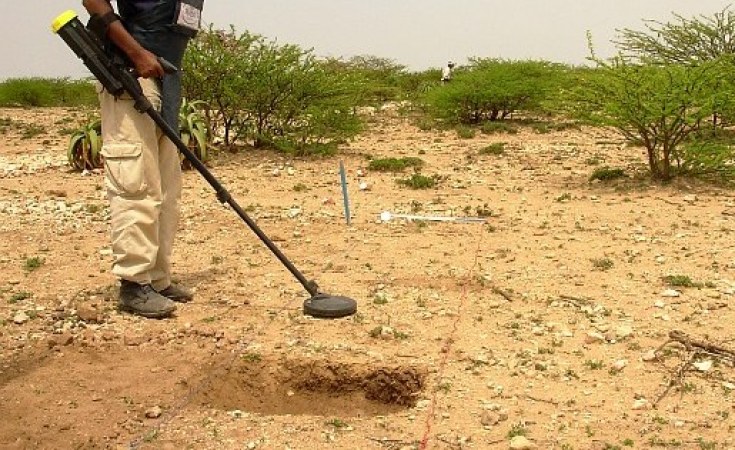 Villagers in Buhera South are living in fear as landmines and other explosives buried by freedom fighters at different former bases during the liberation war, are being picked up by innocent children herding cattle, more than 40 years after independence.

This comes barely three months after two boys (aged five) were killed in a mortar bomb explosion at Murove Village.

One girl sustained a fractured leg, while two others had injuries of varying degree.

One of the children picked up the bomb while herding cattle and took it home thinking it would be a nice toy for her.

She left it outside the house and her brother and cousin (both aged five) tampered with the bomb until it exploded.

Another explosive was picked up by children whose parents used it as a "hammer" for close to two years not knowing it was dangerous.

Different types of explosives including, 81 mm mortar bombs, 60mm mortar bombs, RPG7 rocket and RPG2 rocket have since been found by villagers who called the Zimbabwe National Army to collect them.

After the explosion that killed and injured children at Murove Village, the Zimbabwe National Army experts rolled out awareness campaigns, distributing charts and flyers showing pictures of the dangerous explosives.

They also took the campaign to schools.

More discoveries, according to the villagers, are attributed to the heavy rains that are washing away soils and exposing the explosives and weapons buried decades ago.

Since then, more explosives and war weapons are now being discovered but the ZNA section responsible for explosives is reportedly taking long to remove them.

When The Herald visited the constituency, a number of objects believed to be explosives were covered by leaves and tree branches at different points pending removal by soldiers.

Some villagers had gone for close to a month waiting for the explosives' experts to come and remove the objects.

Buhera South legislator Cde Joseph Chinotimba said he had called the army bosses in Mutare several times but they were still to deploy soldiers to remove the suspected explosives.

"We called the bomb experts from the military to come and remove the explosives but they are taking long. It is not safe to live with explosives in the villages where children play and herd cattle.

"On Monday, I had to personally call the Commander 3 Brigade (Herbert Chitepo Barracks) telling him of the fear gripping my constituency over uncollected explosives found in a number of villages in my constituency and he promised to send a team. We are still waiting but we do not feel safe with the explosives," he said.

Cde Chinotimba said during the war, freedom fighters operating from bases in the constituency, would hide their explosives and weapons and collect them when the need arose.

"During the war, Buhera South was a liberated zone where guerrillas would safely hide their weapons and explosives and take them when the need arose.

"Some of the soldiers died and no one had information on where they would have hidden their explosives.

"When we were called to Dzapasi Assembly Point at the end of the war, some fighters were absorbed into the army while others got some positions in Government. They never went back to the bases to retrieve their explosives and other weapons. Those are the weapons we are seeing today in the villages," said Cde Chinotimba.

A number of war veterans at Murove and Neshumba villages in Buhera concurred with Cde Chinotimba's narration of the war.

The Herald team was taken to two different points at Murove Village where some recovered explosives were kept pending removal by experts.

One of the items looked like a propeller attached to mortar bombs, which experts said can also explode.

The other one appeared like an explosive that is labelled T46 on the charts left in the villages by ZNA explosives' experts.

Mr Simbarashe Chipadza, whose son (Ozil) died in the bomb explosion, asked the Government to quickly deploy experts with detectors to clear the community of the bombs and other explosives.

"I appeal to the Government to send a team of experts with detectors and remove all the dangerous objects from our community," said Mr Chipadza.

He almost broke down while narrating the incident that led to his son's death.

"Ozil and my brother's son Tivakudzeishe were playing outside the house with the object that later turned out to be a bomb.

"They started unscrewing the object until it exploded. The two were killed on the sport and the bomb threw them some meters away.

"We had to pick up their limbs, arms, intestines and other parts some meters away, packing them in a 10kg packet of mealie meal.

"The girls who were meters away were also injured," he said.

The two boys were buried on the same day and their graves are next to each other at the family cemetery.

Mr Custon Chipadza, father of the other boy (Tivakudzeishe), said he had to be called when the accident happened and he assisted in picking up the body parts and taking the three survivors to hospital.

"I was not at home but I had to be called when it happened. It was an unfortunate incident but I had to be strong and also help in taking the injured girls to the hospital," he said.

Tivakudzeishe's father said he had kept another bomb at his house for two years, using it as a hammer until the soldiers visited the village with charts and flyers showing pictures of dangerous explosives.

"I had to surrender it to the soldiers upon realising it was a bomb. For two years it was one of my tools. We were using it as a hammer," he said.

Ms Gladys Mawere, mother of one of the explosion survivors Listen Mufowo, said he rushed to the scene after hearing a blast.

"Upon arrival, I saw my daughter lying on the ground holding his bleeding leg. We rushed her and other injured girls to Mutiusinazita Clinic where they got some first aid and we were referred to Birchenough Bridge hospital where they were admitted.

"The others recovered faster but Listen spent two months in hospital until her discharge a few weeks ago. Her left leg fractured and she is currently using clutches," said Ms Mawere.

At Neshumba area, the village head Mr Luke Zvawanda managed to secure another explosive that looks like mortar bomb after it was discovered by a herdsboy.

"Some four days after soldiers raised awareness on the dangerous weapons and gave us some pictures, my nephew who was herding cattle saw the explosive and rushed to tell us.

"My brother, who is a war veteran, recognised the explosive as a rifle grenade, although part of it is still buried in the soil.

"I protected it with tree branches and leaves while waiting for the military team to come. It has been like that for the past three weeks and we now fear that some children may tamper with it.

"We also fear that our cattle may step on the explosive and it causes destruction. We urge the soldiers responsible for explosives to quickly come and remove the explosive before we lose lives," said Mr Zvawanda.

Other explosives are still to be removed at Mutero and Bhegedhe areas after being found some weeks ago.

The Herald could not visit the two areas due to bad roads.