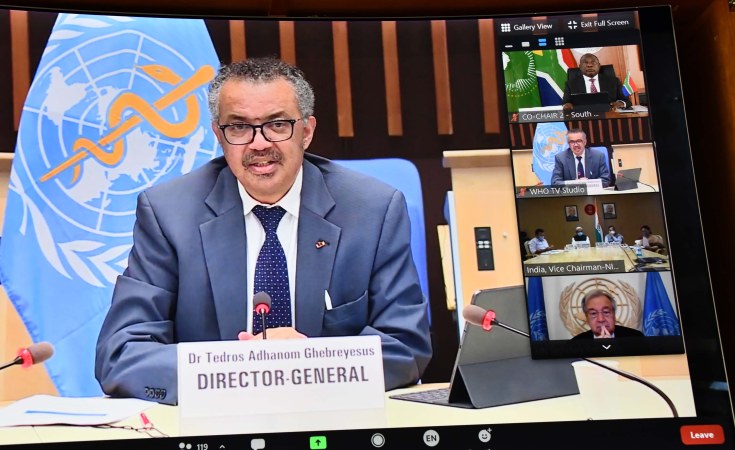 GCIS/Flickr
Dr Tedros Adhanom, director-general of the World Health Organisation,chairs the organisation’s first high-level meeting of the Facilitation Council of the Access to COVID-19 Tools Accelerator on September 10, 2020. The council which is an international collaboration to accelerate the development, production and equitable deployment of vaccines, therapeutics and diagnostics for Covid-19.
Deutsche Welle (Bonn)
By Cristina Krippahl

Officials say 60% of Africa's 1.3 billion people will need to be vaccinated against COVID-19 in order to achieve continentwide herd immunity. But, with cases surging, governments are scrambling to secure enough supplies.

More than 5,400 deaths from COVID-19 have been recorded across the continent over the past week, an increase of 21%, according to the Africa Centres for Disease Control and Prevention.

The surge in deaths and case numbers is worrying governments and international stakeholders, especially after a more infectious variant of the virus was identified in South Africa.

To date, Africa has recorded more than 3.3 million COVID-19 cases and over 80,000 deaths. Experts warn that the lack of testing and the difficulty in obtaining reliable data from many African countries probably means that the case numbers and death toll is much higher. South Africa, for example, is carrying out ten times more tests per capita than Nigeria.

Zimbabwe is among several countries on the continent seeing a significant increase in cases.

More than half the country's 28,675 total and 825 deaths were recorded since the start of January.

On Wednesday, Zimbabwe's the government announced that Foreign Minister Sibusiso Moyo had died after contracting COVID-19.

How are African nations reacting to the surge in cases?

Malawi has declared a state of disaster. President Lazarus Chakwera announced new lockdown measures, including the shutting of schools for the next three weeks and a nightly curfew.

The government of South Africa, one of the continent's wealthiest nations, has come under heavy domestic criticism for failing to start vaccinating yet.

The country has recorded more than 37,000 virus-related deaths and 1.3 million infections. So far, it has secured about 30 million vaccines to be delivered in coming months.

Preparations to counter the surge are under way in Nigeria, where state governors have been holding meetings to coordinate COVID-19 vaccine distribution.

The continent's most populous country of 200 million inhabitants has over 110,000 officially confirmed cases with 1,435 deaths -- although these figures should be treated with caution as Nigeria is carrying out relatively few tests per capita.

Efforts by African countries to launch vaccination programs are being hampered by the hoarding of available vaccines by industrialized nations, WHO secretary-general Tedros Ghebreyesus warned on Monday.

"The promise of equitable access is at serious risk," he said at a WHO executive board session.

"More than 39 million doses of vaccine have now been administered in at least 49 higher-income countries. Just 25 doses have been given in one lowest-income country. The world is on the brink of a catastrophic moral failure. The price of this failure will be paid with lives and livelihoods in the world's poorest countries," he said.

Vaccines secured so far by the WHO's COVAX program for poor countries will not be made available before the end of March, while large deliveries are scheduled only for June.

By the end of 2021, it aims to have supplied two billion doses globally.

'Foolish' to depend on the West

African leaders are openly showing their disillusionment with the lack of international solidarity.

"It's very important to come to the realization that depending on the Western nations for our well-being as far as medical issues are concerned is foolish," Kagwe said.

Ellen Johnson Sirleaf, former president of Liberia and co-chair of the WHO's Independent Panel for Pandemic Preparedness and Response, agrees.

But in an interview with DW, Sirleaf said that the pandemic could have potentially been avoided in the first place if "China had given information on some of the earlier findings about a breakout" and "if WHO had had the effectiveness of a timely and effective alarm system."

What is the African Union doing about vaccines?

This is not enough to reach the task team's aim of inoculating 60% of Africa's 1.3 billion people in the hope of reaching herd immunity.

"Volumes to be released between February and June may not extend beyond the needs of front-line health care workers," the AU warned in a statement, conceding that they "may thus not be enough to contain the ever-increasing toll of the pandemic in Africa."

According to a draft briefing prepared by the African Export-Import Bank, African countries will pay between $3 (€2.48) and $10 per dose for these AU organized vaccines, Reuters news agency reported.

While this is less than the $19.50 to $37 that wealthier nations are paying, it is still a considerable financial burden for countries already struggling to manage the economic fallout of the pandemic.

It means to fight the virus, poor African nations risk having to incur greater debt.

Mariel Müller and Marula Kauffmann contributed to this article.