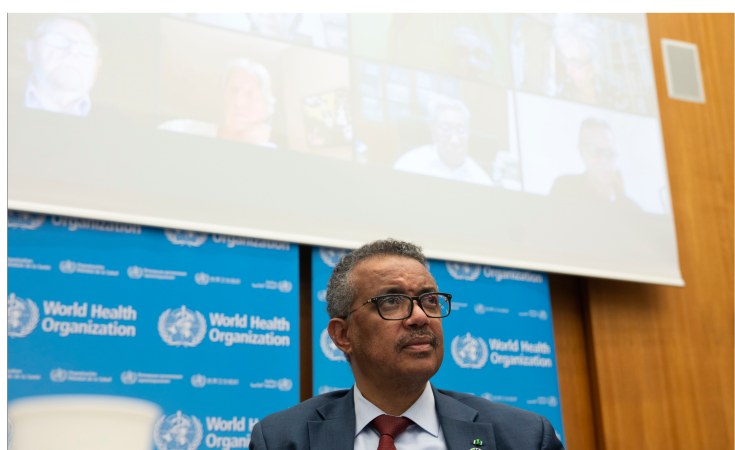 African countries say the US' return to the World Health Organization will be crucial to the global fight against the Covid-19 pandemic and other future infections.

On Wednesday, President Joe Biden signed a series of executive orders, among them halting Washington's initial withdrawal from the WHO, as sanctioned by former President Donald Trump.

Moussa Faki Mahamat, chair of the African Union Commission, said on Thursday that the US presence on the WHO table will provide crucial synergy against the pandemic.

"I am delighted that President Biden [has] made the return of the USA to the WHO one of his first decisions, including joining Covax," Mr Faki said

He was referring to the global initiative of 69 developed countries that is meant to bring together governments and manufacturers, and ensure Covid-19 vaccines reach everyone around the world.

"All countries, big and small, must work together to ensure vaccine equity for everyone everywhere as part of our global response to the pandemic," he said.

The US had been a member of the UN's global health organisation since 1948, rising to be its biggest donor with an annual contribution of about $400 million.

But Trump withdrew membership in July last year after accusing the organisation of lack of transparency, especially in investigating China's role in the spread of Covid-19.

The WHO says the US funded it to the tune of $945.6 million between 2016 and 2017, 76 percent of which was voluntary funding for programmes such as health security, polio, primary health care and maternal child health, which are prevalent in Africa and other developing countries.

"The WHO is a family of nations. We are all glad that the United States of America is staying in the family," said Tedros Adhanom, the Ethiopian who heads the WHO.

"We must work together as one family to ensure all countries can start vaccinating health workers and other high-risk groups in the first 100 days of 2021. With your commitment, we are one step closer," Tedros said, during the WHO's Executive Board Meeting on Thursday.

The US was represented by Anthony Fauci, the Director of the National Institute of Allergy and Infectious Diseases.

Trump's return to the WHO was part of his pre-election pledge, which he argued the US would be safer in the organisation, not outside of it.

As the formal withdrawal would have taken effect this July, the cancellation means the US need not apply to rejoin and will continue to be allowed immediate participation in WHO meetings.

In his inauguration speech on Wednesday, President Biden also vowed to repair broken relations with allies and push for common solutions to problems.

"Here is my message to those beyond our borders: America has been tested and we have come out stronger," he said in Washington in a ceremony televised globally.

"We will repair our alliances and engage with the world once again., not to meet yesterday's challenges, but today's and tomorrow's. We will lead not merely by the example of our power but by the power of our example."

Biden also cancelled the US' withdrawal from the Paris Agreement, a 2015 document reached by UN members to progressively adopt green energy.

Trump, a non-believer in climate change, had withdrawn in November 2019, citing the treaty's potential to kill domestic industries and cause joblessness.

"Biden is at work to address the climate crisis and has taken steps to bring America back into the Paris Agreement," tweeted Ted price, the State Department Spokesperson on Thursday.

"By rejoining the crucial [Paris] Agreement that we were instrumental in achieving, we'll again lead the world in addressing the existential threat of climate change."

A factsheet on the White House website said President Biden will "take swift action to tackle the climate emergency" by meeting the "demands of science, while empowering American workers and businesses to lead a clean energy revolution".

Trump often ignored his own scientists, despite the fact that the US is the world's biggest emitter of pollutants that contribute to global warming and climate change.

The agreement is especially crucial for Africa because of the potential investments that may target conservation and green energy.