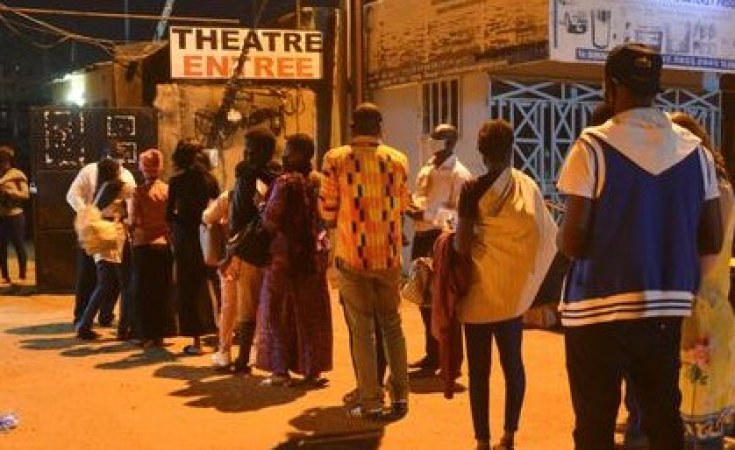 Burkina Faso has a thriving theater tradition. But terrorism and the coronavirus are curtailing the activities of its only permanent theater.

Soldiers start shooting in the middle of Burkina Faso's capital, Ouagadougou. People scream. They take cover, waiting in fear to see what will happen next. Will the soldiers keep firing their weapons? Are innocent civilians about to die? Or are the bullets aimed at an insurgent planning to blow up the whole town?

It's a scene that has been replayed many times in the past years in Burkina Faso, where violent attacks have caused more than one million Burkinabe out of a population of 20 million to flee their homes.

Fortunately, today the violence is taking place on stage at the open-air Carrefour International Theater of Ouagadougou, or CITO for short.

It's a scene from the play "La Patrie ou la Mort" ("Fatherland or Death") by Burkinabe playwright and actor Mahamadou Tindano.

You can't ignore the topic of violence, Tindano says: "As artists, we must react".

Tindano had started out writing short pieces about the increasing terrorist activity in Burkina Faso and what it means for his country. Then CITO commissioned him to write "La Patrie ou la Mort".

Tindano made a deliberate decision to not to locate the play specifically in Burkina Faso to make it relevant for others in West Africa's volatile Sahel region.

"Terror can just as well happen in Niger or Mali. Wherever you find terror, you find stigmatization. And so, my play can be performed anywhere," Tindano says.

Taking to the stage to tackle terror

CITO normally stages up to four productions a year, regularly inviting actors from French-speaking countries across West Africa, including the Ivory Coast, Togo, Benin, Niger and even Senegal.

It has also increasingly been putting on productions penned by West Africans playwrights, who - like Tindano - tackle contemporary topics such as terrorism and insecurity.

Actor Tony Ouedraogo does his make up as he talks about how he would love to see "La Patrie ou la Mort" tour in towns like Djibo and Dori in Burkina Faso's far north near the border with Mali.

The situation there is particularly unstable, explains Ouedraogo.

In "La Patrie ou la Mort", the actor plays a refugee who is killed by villagers because they believe he is a terrorist. He later returning to the state with the pale make up of a ghost.

Ouedraogo believes such plays have a role in warning of the dangers of terror, or joining terror groups.

Profits squeezed by terrorism and coronavirus

Violence and extremism are influencing more than the theater's subject matter, though, they are also affecting its very existence.

It's too dangerous to travel to the north to perform anymore, Ouedraogo says, especially as those seen as trying to introduce new ideas are often targeted by insurgents.

And with the threat of violence limiting its possibility to tour to the north, and other regions of Burkina Faso, CITO's revenue is falling.

The theater has a large network of supporters. Its productions also often attract long queues of people vying for one of its 250 seats. But a regular ticket cost a lowly €2,30 and donations from Europe have dried up due to the COVID-19 pandemic.

Performances of "La Patrie ou la Mort" had to be stopped two weeks earlier than planned because the theater was running out of money.

The attraction of life on the stage

"La Patrie ou la Mort" was the 48th production of the theater, which was founded in 1996. Young actors who had performed on European stages wanted to bring their experience back home.

CITO aims to guarantee its performers a contract for at least two, sometimes three months. This is unusual in Burkina Faso where productions by other companies might only be performed a few times at an international cultural centers.

But being cast once in a role at CITO doesn't mean actors are guaranteed of being cast again.

"It's a difficult life, very precarious," says managing director Martin Zongo. "Some haven't been involved in a single project for a whole year."

That doesn't stop choreographer and actor Haoua Sangare wanting be on stage.

"For me, life is theater. Dance and theater are how I express myself," she says after the performance where she portrays a villager.

Asked why the theater has such a high standing in Burkina Faso, she laughs: "Maybe it's because we're a landlocked country!"

But one thing's for sure, she says: "Our plays are engaging, and our theater is very advanced."