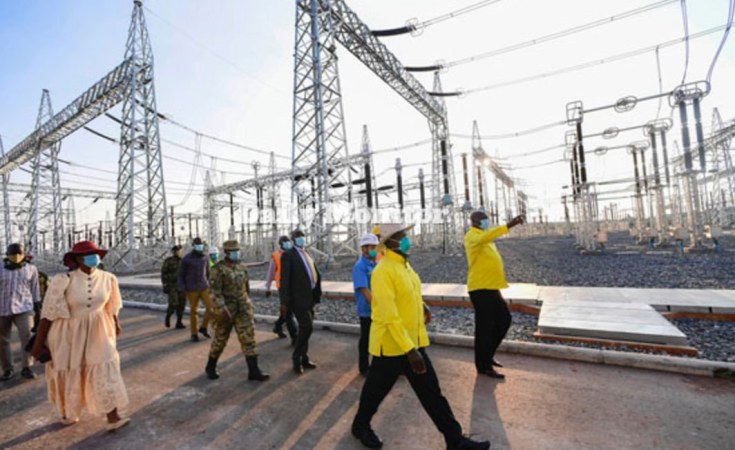 President Museveni commissioned more than a dozen infrastructure development projects, including five roads, four markets, two power substations and a water transport vessel all worth at least Shs1.3 trillion in the last 50 days of last year.

The projects include those that are complete and operational and others on which work commences during the course of this year. Two out of the five roads, namely the 44.5km Bumbobi-Lwakhaha Road in eastern Uganda, and the Ishaka-Katungulu Road in western Uganda, are complete.

The Bumbobi-Lwakhakha Road, which traverses the districts of Mbale, Manafwa and Namisindwa, starting a few kilometres outside Mbale on the Mbale-Tororo highway, through Bubulo and ends up in Lwakhaha on the common border with Kenya, was constructed at a cost of Shs153b.

The 58km Ishaka-Katunguru Road, which starts in Ishaka Town and ends at Katunguru Bridge, connects the districts of Bushenyi and Rubirizi to Kasese.

Roads to be constructed

Work on the other three roads, namely the 92km Muyembe-Nakapiripirit Road, the 16km Kira-Kasangati-Matugga road, and the 11km Najjanankumbi-Busaabala Road, is set to commence this year.

Work on the Kira-Matugga Road will start at Kira Town roundabout and entails turning the 2km section linking Kira to Kyaliwajjala into a dual carriage way with four lanes and providing pedestrian walkways and cycle lanes.

Work on Busaabala Road, which leads to One Love Beach owned by the former presidential candidate and leader of the National Unity Platform (NUP) party Robert Kyagulanyi, alias Bobi Wine, will also include rehabilitation of the Namasole Road and two inter changes on the Kampala- Entebbe Expressway.

The five roads are to cost Uganda a total of Shs1 trillion out of which Shs577b or 51 per cent of the funds have been made available by government through the Uganda National Development and Maintenance Programme (NRDMP), under which work on Ishaka-Katunguru Road was funded.

Construction of the four markets worth at least Shs83.5b, namely the Shs16b Kasese Central Modern Market, the Shsh15.8b Lugazi Central Market, the Shs27.7b Tororo Central Market, and the Shs23.4b Soroti Main Market, was financed by the AfDB under the Markets and Agricultural Trade Improvement Programme Project-II (MATIP-2), under which AfDB made available $93.73m (approximately Shs340.709b).

The 300-seater MV Sigulu worth Shs16b, which was constructed by Danish firm JGH Marine, with funding from the government, was also commissioned to ply the waters on Lake Victoria between Namayingo mainland and the Sigulu Islands.

On January 7, Mr Museveni commissioned the Isimba Bridge, which connects Kayunga to Kamuli.

The bridge, which is comprised of two bridges, one measuring 435 metres and another 475 metres, are linked by a road at the small Lake Victoria island of Koova.

The bridge comes as part of the Isimba Hydro Electric Power project for which Uganda borrowed $482.5 million from the Export-Import (EXIM) Bank of China at an annual interest rate of two per cent repayable over a 20-year period.

The government of Uganda contributed $107 million, bringing the total cost of the project to $589.5 million.

It also entailed putting in place a new sewerage system.

The spokesperson of the Ministry of Health, Mr Emmanuel Ainebyona, told Sunday Monitor that the Shs70 billion for the work was put together with contributions from Saudi Fund for Development, Arab Bank for Economic Development in Africa (BADEA) and the DFID Fund for International Development. The package comprised both grants and loans, but it was not possible to establish how much of it was in loans.

The factory, which has a production capacity of 5 metric tonnes per hour, and is expected to provide 200 jobs in direct employment and another 1,500 in indirect employment, was constructed with funding from government.

The same day, Mr Museveni commissioned the newly-refurbished Shs74bn Yumbe General Hospital in Aringa North Constituency in Yumbe District, which was rehabilitated and expanded with contributions from the government and the Arab Bank for Economic Development in Africa (BADEA), the Opec Fund and the Saudi Fund for Development (SFD). It was, however, not possible for Sunday Monitor to establish how much each of the financiers provided towards the cost of rehabilitation.

The biggest concern, though, is that most of the projects that the President commissioned have been or are to be implemented with funds borrowed from the Exim Bank of China, the Islamic Development Bank, and AfDB, which are providing Shs725.305b out of the required Shs1.4 trillion, which constitutes 53 per cent of the funds.

AfDB and IDB are providing 49 per cent of the money that is going towards the five roads, with the Shs153.105b for the Bumbobi-Lwakhakha Road coming from AfDB, and the Shs399.9b for the Muyembe-Nakapiripirit road coming from IDB.

The Shs83.5b for work on the four markets that were constructed was put forward by AfDB.

AfDB alone provided Shs236.605b or 20.9 per cent of the Shs1.129 trillion that has been committed to all the projects, while IDB has by way of the Muyembe-Nakapiripirit road project provided 29 per cent of the funds.

Exim Bank of China, which provided money for work on Mukono power substation, provided 5.3 per cent of the funds.

Exim Bank of China was second on the list of three biggest recipients of money that government spent on servicing Uganda's external date in the financial year 2018/2019, according to a report on public debt, guarantee, other financial liabilities and grants for the Financial Year 2019/2020, which was published by the Ministry of Finance in March last year. Public debt reports are annual publications of the ministry.

Mr Museveni's commissioning of the projects has once again returned focus on the actual size of Uganda's debt stock.

The total external debt stock has been on an upward trajectory since the Financial Year 2013/2014. A report on the "State of Indebtedness, loan performance and debt sustainability for Uganda as at June 2018," suggested debt stock was constituted of Shs28.5 trillion as external debt, while Shs13.5 trillion is domestic debt.

Official government figures on the total debt, which includes both disbursed funds and loan commitments, which have not yet been disbursed, suggests that Uganda owes a little less than what Parliament suggested, but Mr Julius Kapwepwe from the Uganda Debt Network, disputes the government's position.

"The figures that government has been declaring are in respect to disbursed and undisbursed. Beyond Disbursed and Outstanding Debt (DOD), our computation shows that national debt was in excess of $15.3 billion by end of 2018, and that is excluding new debt like the Lubowa International Specialised Hospital project and other loans acquired this year," said Mr Kapwepwe.

However, the chairperson of Parliament's Committee on Finance and Economic Planning, Mr Henry Musasizi Ariganyira, insists that Uganda Debt Network figures cannot be relied upon.

"Decision makers cannot rely on figures from Uganda Debt Network. Decisions are made on the basis of official figures that have been provided by government," Mr Musasizi, who is also the MP (NRM) for Rubanda East constituency, says.

Mr Museveni's actions come in the wake of a recent warning by Parliament's Committee on National Economy that Uganda's debt stock is likely to increase by more than $1 billion per year even without taking new loans due to failure to utilise borrowed funds.

The committee indicated that $5.08 billion remained undisbursed as at June 2020, because of slow implementation of project such as the Rwekunye-Apac-Lira-Acholi bur road project for which Parliament approved in May 2016, a $210 million loan, out of which only $21 million had been disbursed as of December 2019, and the Busega-Mpigi Express Highway for which $91 million was borrowed, but only $6.4m had been disbursed.

The Muyembe-Nakapiripirit road is likely to end up on that list. Work on the project was meant to have started in January last year, but has never kicked off.