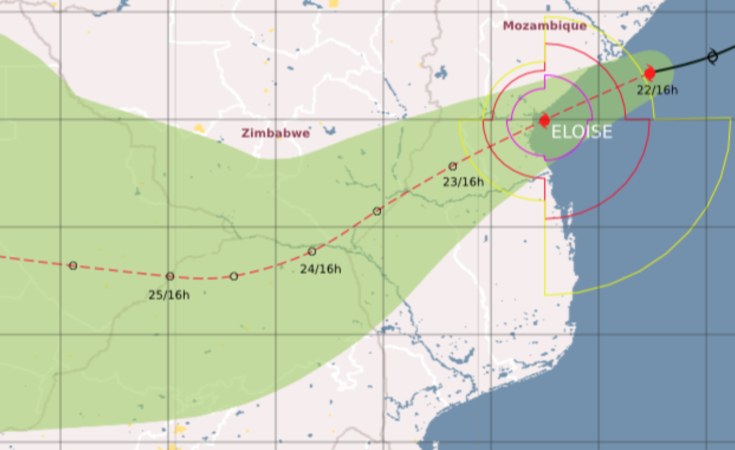 Meteo France
The path of Eloise, as predicted on Friday January 22.
SAnews.gov.za (Tshwane)

The Department of Water and Sanitation (DWS) says plans are in place for the imminent impact of Tropical Cyclone Eloise.

"Tropical Cyclone Eloise has been in the Southern African Development Community (SADC) region for a while and has mainly been over the island States, with the possibility of hitting Mozambique, with initial indications being that it would impact primarily Mozambique, Zimbabwe and Botswana, with very little impact on South Africa, if any," the department said.

The department said the reality unfolding is that there will be impact in the provinces of Mpumalanga and Limpopo.

The department warned that the resultant floods could also affect KwaZulu-Natal.

"The cyclone has been upgraded to a Category 2 storm. It was expected to reach the coastal town of Beira in Mozambique on Saturday morning. The DWS rain gauges have not as yet indicated any rainfall in the north-east of Limpopo and Mpumalanga, but rather cloud coverage over the same areas.

"The DWS has done planning for possible risks in this regard from hydrological, operations and construction perspectives, considering the kind of infrastructure the DWS is responsible for. Where gaps were identified, immediate actions were put in place to address these," the department said.

According to the department, a number of high risk areas have been identified. These include Tzaneen, Blyderivierpoort, Klaserie, Nandoni and Albasini Dams.

The department said the relevant departmental officials have been actioned to apply the necessary measures to monitor and manage these areas very closely.

"There are also teams on standby to respond to any situation that might arise. Part of the teams' responsibilities will include ongoing engagement with stakeholders that might be affected within the identified areas.

"These interactions will include cautions/alerts when the possibility or reality of dam sluices/gates being opened to release water and reduce pressure on the infrastructure. The releases could lead to possible flooding downstream of the dam/s," the department explained.

The department has advised that it is always important that those that operate downstream of dams respond quickly and positively to all warnings of possible flooding.

"This will reduce loss of lives, livestock for farmers, property and equipment, which could be moved in time."

While Eloise will impact mainly Limpopo and Mpumalanga, the department has also reminded people within the Vaal and Orange River Systems that it is still important for everyone to be vigilant.

"The Gariep (the biggest dam in the country) and the Vanderkloof (the second biggest) are already full and spilling, with Bloemhof also at capacity. The high inflows into the country's biggest dams has meant that the possibility of flooding in [those areas] remains.

"The prediction of rainfall is unreliable. Therefore, the release of water from these dams is not top of mind at the moment. It is critically important for all those who would be affected by such floods to already begin moving away from the floodlines," the department said.

The main objectives for the DWS are to ensure the safety of infrastructure (dams), minimise damage, and ensure at least 100% full dams at the end of the flood.

The department annually puts together a flood preparedness plan in anticipation of high levels of rainfall, especially during the summer rainfall period.

The plan is meant to enhance monitoring of rainfall, inflows into rivers and dams, as well as to raise alarm bells timeously, in case of impending danger through floods.

After widespread flooding reports from Mpumalanga and Limpopo, the South African Weather Service has warned that more rain is expected in those provinces.

The Weather Service said disruptive rain is expected over the escarpment and lowveld areas of Limpopo and Mpumalanga, and the eastern highveld from Sunday until Monday.

"A warning has been issued for the eastern parts of Limpopo and Mpumalanga for [Sunday] into [Monday] due to persistent heavy rain, and more heavy rain is expected [on Monday night] into [Tuesday]. This will cause serious strain on emergency services.

"Take extreme caution in these areas," the Weather Service warned.