Nairobi — Opposition Leader Raila Odinga now claims the warring factions within the ruling Jubilee Party have contributed to the failure by his handshake partner President Uhuru Kenyatta to deliver the 2017 election pledges.

Speaking during a live interview on Kameme TV on Sunday, Raila claimed a faction led by Deputy President William Ruto has often used their numbers in parliament to frustrate the President's agenda.

"President Uhuru himself can tell you that I have told him many times where things have gone wrong and I have also advised him to take action here and there. But because of divisions within the Jubilee government they do not take action because nowadays a person who is accused of corruption is defended by the Jubilee MPs," the ODM Leader stated.

Raila dismissed as sheer propaganda accusations by Ruto and his allies that he was responsible for derailing government plans.

The ODM Leader said his 2018 truce with President Kenyatta was about securing the nation's stability following the disputed 2017 election and not to implement the Jubilee agenda.

"I don't have a government office. I don't get a government salary. I don't attend any cabinet meeting so I don't know and would not be in a position to influence what they are discussing. So those who say that Handshake's things have changed things are slandering and lying to Kenyans," he said.

Raila and Ruto have in the past week traded accusations over who between them should take responsibility for the failure by President Kenyatta to deliver on his second term re-election pledges.

Raila challenged the government to explain why there were no laptops in schools as promised in 2013 and why, despite promising to create a million jobs every year, more youth were jobless than ever before.

"They said they would give every child a laptop within six months after getting elected. It is now eight years and the pupils who were to receive the laptops are now finishing primary school without ever seeing the laptops," Raila said.

But in response the DP rallied to the defence of the Jubilee Government while addressing a rally in Dagoretti on Sunday where he said it was wrong for Odinga to address Jubilee's failures in political rallies.

"If you have a problem with the performance of the Jubilee government, look for President Kenyatta on the phone or see him in person at his office. You call the President your brother. Why then are you airing your grievances in rallies, saying, Jubilee has not done this or that? Look for the President in his office," DP Ruto said.

Previous Story
Citing Political Struggles, Odinga Says He is a Strong Believer in God
Next Story

Citing Political Struggles, Odinga Says He is a Strong Believer in God 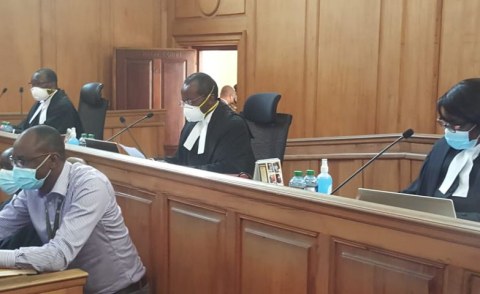 Kenya President Criticises Bench for Denying Constitution Change
Tagged:
Copyright © 2021 Capital FM. All rights reserved. Distributed by AllAfrica Global Media (allAfrica.com). To contact the copyright holder directly for corrections — or for permission to republish or make other authorized use of this material, click here.