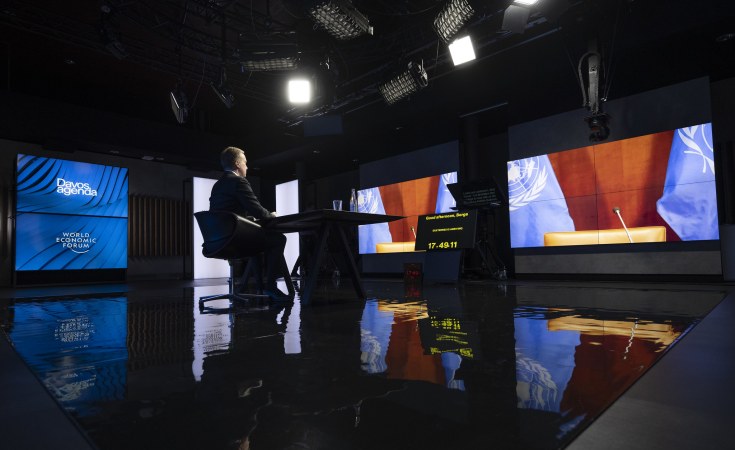 World Economic Forum/Flickr
An image from the Davos Agenda, being conducted virtually in 2021.
Thomson Reuters Foundation (London)
By Sonia Elks

Billionaires including Amazon's Jeff Bezos and Tesla founder Elon Musk have seen their wealth soar during the COVID-19 pandemic while the world's poor face years of hardship, charity Oxfam said on Monday as it demanded steps to tackle inequality.

Nations have a "shrinking window of opportunity" to build a fair, green recovery, according to "The Inequality Virus" report, published as global leaders tune in for the World Economic Forum's virtual "Davos Dialogue" meeting.

"We stand to witness the greatest rise in inequality since records began," Gabriela Bucher, executive director of Oxfam International, said in a statement as the charity called for higher wealth taxes and stronger protections for workers.

"Rigged economies are funnelling wealth to a rich elite who are riding out the pandemic in luxury, while those on the frontline of the pandemic - shop assistants, healthcare workers, and market vendors - are struggling to pay the bills."

COVID-19 has unleashed an economic storm that hit the poor and vulnerable hardest, with women and marginalised workers facing the worst of job losses and the World Bank warning more than 100 million people could be pushed into extreme poverty.

It could take more than a decade to reduce the number of people living in poverty back to pre-crisis levels, Oxfam said.

Meanwhile, the collective wealth of the world's billionaires rose $3.9 trillion between March and December 2020 to reach $11.95 trillion, the report calculated.

That sum would be enough to prevent anyone from falling into poverty as a result of the pandemic and pay for a vaccine for everyone on earth, researchers calculated.

The pandemic marks a "pivotal" point which has exposed economic disparities and built support for "transformative" policies, Oxfam said, calling for higher taxes on wealth and corporations alongside stronger protections for workers.

A temporary tax on excess profits made by the 32 global corporations that have profited the most during the pandemic could have raised $104 billion in 2020, Oxfam said.

International cooperation would be key to implementing many changes, said Jayati Ghosh, an economics professor at the University of Massachusetts Amherst who was among the economists polled by Oxfam for the report.

The administration of new U.S. President Joe Biden will spur "more willingness" for joint action on issues including a crackdown on tax havens and a bailout for developing nations, she told the Thomson Reuters Foundation by phone.

"There are some very, very big hurdles, but there are many things that can be done very quickly," she added.

(Reporting by Sonia Elks @soniaelks; Editing by Helen Popper. The Thomson Reuters Foundation is the charitable arm of Thomson Reuters, and covers the lives of people around the world who struggle to live freely or fairly. Visit http://news.trust.org)